What does it take for a company to move away from a core feature that is central to its identity?

Last May, Uber broke from its tradition of only accepting payment via card. The U.S. company began a pilot that allowed users in Hyderabad, a city in India with a population of nearly eight million, to pay for their rides using cash.

One of Uber’s biggest selling points is its seamless payment system. By binding a card to your account, your fare is debited as you close the door of your ride and get on with the rest of your day. That means convenience to most people: no hassle finding small money to pay the fare, no issue if a driver doesn’t have change for your large bank note, no need for jingling coins to fill your pockets when you do get your change, and no weirdness over tipping/not tipping.

Yet, despite all that, cash is becoming an important facet of Uber’s service in some parts of the world.

Last week that initial cash payment trial was expanded to a range of new markets that took it to 10 countries across three continents, including India, all of Southeast Asia (minus Singapore and Malaysia), Kenya and Nigeria in Africa, parts of the Middle East, and Peru in Latin America.

And that’s just the start, the cash payment option is all set to expand further to reach Uber customers in many more countries in these regions and beyond.

So why is Uber turning away from one of its core tenets?

The fact of the matter is that ownership of credit cards, which are essential to even have an Uber account, is well below 10 percent of the population in most emerging markets.

Speaking to me more than a year before the Hyderabad pilot, Asia-based Uber executive Mike Brown admitted that the company needs to be flexible in some parts of the world, particularly around payments, if it wants to compete to it fullest.

“We recognize that not everyone uses a credit card and there are different payment mechanisms in different places. We want to be able to serve everyone so, fundamentally, everyone needs to accommodate our system or we need to accommodate how riders in other markets pay,” he said.

Cash payments were a mere possibility when I met Brown in April 2014, but now they are a strategic reality. Speaking at the dual launch of payments in Bangkok, Thailand, and Jakarta, Indonesia, this week, an Uber spokesperson told TechCrunch that cash has become “a very important experiment that is now in multiple markets globally and will have implications for our business across the world.”

As CEO Travis Kalanick said recently during a trip to India: “You have to be empathetic to reality. You can bend reality but you cannot break it… We take cash in India. We’ve always wanted to provide quality customer support and that’s the only non-negotiable.”

In contrast to the challenges that Facebook faces in India, where its Free Basics service has been banned for violating the principles of net neutrality, Uber has taken a more conciliatory approach. 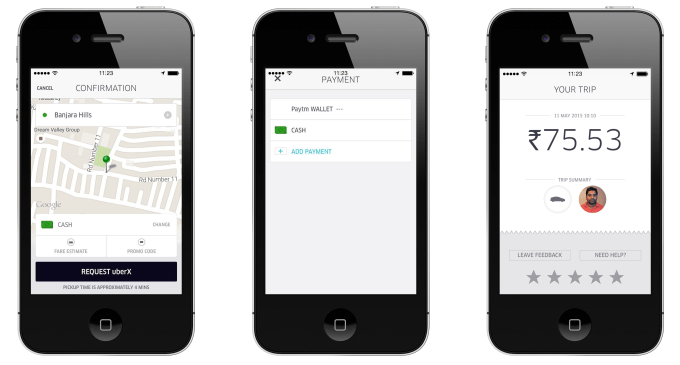 Uber has built its business on digital payments, so throwing cash into the mix complicates things. As it stands now, drivers are paid digitally — that’s to say that payment for rides completed, bonuses for clocking specific milestones (Uber incentivizes drivers in many countries if they complete a certain number of rides or clock specific fair volumes) and other additional incentives are wired to a driver’s bank account. That allows Uber to deduct its share of revenue easily, but mixing in cash is a challenge because a portion of each driver’s fare is Uber’s money.

To manage that, Uber rolls cash payments out slowly in new cities so not all passengers have immediate access to it. That’s to dilute the number of cash-based journeys drivers are handling. That way, Uber said, it can deduct its share of cash-based journeys from a driver’s regular wired payments. So long as drivers clocked more card-based payments, a driver would never been in arrears with the company and Uber would never need to ask them to hand back cash.

Accelerating Uber’s move to cash is the fact that it is faced with strong rivals in India (Ola) and Southeast Asia (Grab) which have long accepted cash. Grab is only just introducing cashless payments, while, in addition to cash, Ola offers a standalone money wallet service which can be used to pay other bills and services beyond Ola taxi rides.

Ola, which said sees around half of its income from cash-based payments and half from Ola Money, takes a dual pronged approach to offer the same flexibility that Uber targets.

“The mobility market in India is still evolving and needs solutions that are customized to its needs,” Anand Subramanian, senior direct of marketing communications, told TechCrunch.

“Ola Money has seen tremendous acceptance since launch given the experience it delivers,” Subramanian, who didn’t give more specific figures on Ola Money, added. “Cash continues to be an important mode of payment for Ola users and with the largest user base in the country, it will help us achieve our mission of mobility for a billion Indians.”

Five-year-old Grab — which recently rebranded from GrabTaxi — had been test cashless payments in Singapore, a market where card penetration is higher and cash is rarely used for transportation journeys. Last month, it announced plans to expand that service across its six markets in Southeast Asia over the coming months.

“In a region where, outside of Singapore, credit card penetration is in the low single digit percentages, we’ve always given our users the option to pay with cash,” a Grab spokesperson told TechCrunch in a statement. “Many drivers also prefer the immediate cash flow, rather than waiting days to receive their due incomes.”

“We invested years ago to build an operational network across the region that supports cash, such as a top-up process for drivers. Grab is proud to be setting the standard in serving local needs that other industry players are only now trying to test and follow,” the spokesperson added.

Beyond offering card payments for those who want, Grab said it is also exploring the possibility of working with partners who could help introduce “personal mobile wallets” for cashless payments without a credit card. One early partner is operator Singtel, but it sounds like Grab may experiment with Ola Money-like services, potentially leveraging its partners in the ‘League Of Uber Rivals’ — Ola, Grab, Lyft and Didi Kuaidi — to advance its business.

Allowing passengers to ride without a credit card potentially enables the Uber service up to new demographics, but Uber also believes that it works two ways.

“By offering cash as an alternative mode of payment, we are opening up Uber to a much larger base of potential users who prefer transacting in cash. By using Uber, they in turn are also introduced to a new, smart technology that enables them to move around their city easily, and potentially electronic payments which is something they may not have been familiar with or comfortable using previously,” the company spokesperson said.

Uber said it has seen “exponential growth” in sign-ups and new user activity in countries and cities where it accepts cash, but it declined to provide specific figures. Likewise, it said it has seen “a lot of migration to electronic payment options from users who began using Uber only once we introduced cash payments,” although it provided no figure to support that claim.

What’s particularly interesting about cash payments is that it is a major global feature which was incubated in India — but it is not the only one. A number of Uber’s safety measures — including in-journey status updates and an SOS button to authorities — and its brief foray into auto-rickshaws and ‘Go’ hatchback service (which expanded into neighboring countries) were also born out of the country.

That makes a lot of sense as India’s billion-plus population has plenty in common with many emerging markets worldwide, so solutions that fit with various elements of India’s culture or way of life will probably work, or can be tweaked to work, in other parts of Asia, Africa and beyond.

Uber has said its business India will soon overtake the U.S. to sit behind only China, and, with that in mind, the company recently announced plans for its first dedicated R&D team on the ground in India. It’s a move that’s been long awaited if Uber is to compete more closely with local rival Ola, the dominant player, so it stands to reason that we will see many more features and new services for international markets that originate from India in the future.

“We have some exciting announcements in the pipeline and stay tuned in the coming months to hear more about some of these innovations that will be rolled out in emerging markets,” Uber teased.