Plans to construct the beginnings of Elon Musk’s Hyperloop are now underway in Quay Valley, California. Hyperloop Transportation Technologies (HTT) announced plans for a 5-mile test track late last year and is about to break ground on an initial framework for what HTT CEO Dirk Ahlborn hopes will become the U.S. transportation infrastructure of the future.

Musk first proposed the Hyperloop, a vacuum tube intended to speedily shoot passengers at 800 mph from city to city, in 2013. The idea was to create a mechanism of transportation that could get folks from San Francisco to Los Angeles in under 30 minutes.

But Musk is a busy man, managing both Tesla and SpaceX, and left building plans up to others.

HTT is one of two startups to take on the task since then. Ahlborn assembled a team of volunteer engineers and scientists shortly after Musk put forth the idea, offering equity in the company instead of pay to those willing to put in at least 10 hours of work each week.

The project soon attracted talented individuals from companies like NASA, Boeing, SpaceX and Tesla – and a lot of interest from outside investors as well. According to Ahlborn, more than 600 investors have approached the currently self-funded operation, hoping to get in on the ground floor.

“We think of this as more than a company, it’s a movement,” Ahlborn told TechCrunch over the phone from JumpStartFund headquarters – a crowdsource funding platform he also runs out of L.A. 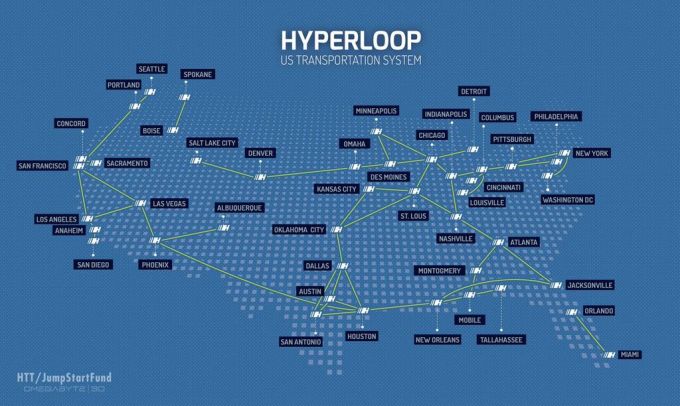 The company aims to create a system traveling faster than the speed of sound at a potential 760 mph, and a lower construction cost than “any existing, and yet proposed railway projects,” according to the website.

Compare that to a similar plan in California to build a high-speed rail system going (tops) 220 mph and initially costing $6.6 billion and upwards to $33 billion over time to go 400 miles – $82.5 million per mile. It’s about $20 million per mile to build HTT’s version of the Hyperloop, according to Ahlborn – a fraction of the current cost of building high-speed rail in the U.S.

Though the initial construction is referred to as a test track, Ahlborn told TechCrunch this was actually the beginning of what will eventually become ground zero of a much larger system.

HTT bought land last year to begin initial construction on the Hyperloop in Quay Valley – a proposed 75,000 resident, solar-powered concept city being built in King’s County, California that intends to use HTT’s test track as its main transportation system. 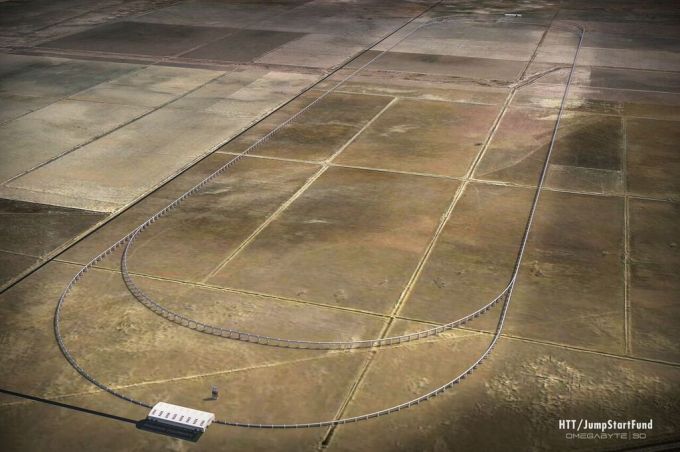 HTT shared some renderings with us to show what this system will look like in Quay. Construction on the test track begins this year, with analysis of the speed and optimizing the route happening in 2017. Actual passengers should be able to hop on board by 2018 if all goes according to plan.

Quay is halfway between San Francisco and Los Angeles and the beginnings of what Ahlborn envisions for the future of high-speed transport in the U.S. The HTT CEO would like to eventually expand his hyperloop to go from San Francisco to Los Angeles and said he’s been speaking with many rail and bus companies as well as government officials to make that happen.

But for now, Ahlborn and his team is focused on building about five miles of test track in a little, futuristic town in the middle of California farm country. Just how quickly will this initial Hyperloop be able to whiz town folks about the length of Quay? A mere 80 seconds, he tells me.

Quay also gives HTT a chance to experiment with newer digital tools Ahlborn believes should be a part of modern transportation. HTT will eliminate coal age relics such as ticketing and include augmented windows and WiFi within its new structure.

Ahlborn mentioned working with a European AR company to help implement some possible Hollywood experiences into the ride as well.

“Being in L.A. and being in Hollywood we think there’s maybe some movie experience on the screens,” Ahlborn explained. “Rather than a trailer, it’s like you are going through Jurassic World and look outside and you see dinosaurs outside. You would have the screens all over the capsule so everybody has kind of the same experience.”

Built-in AR screens could also help HTT monetize in other ways – with digital advertising to a captive audience for short bursts as passengers zip from city to city.

HTT isn’t the only company laying down tracks. Elon Musk built a test track of his own at SpaceX, allowing students to offer up improvements and play with the plans. The other startup working on the Hyperloop, aptly called Hyperloop Technologies, is laying out its own track in the California desert. 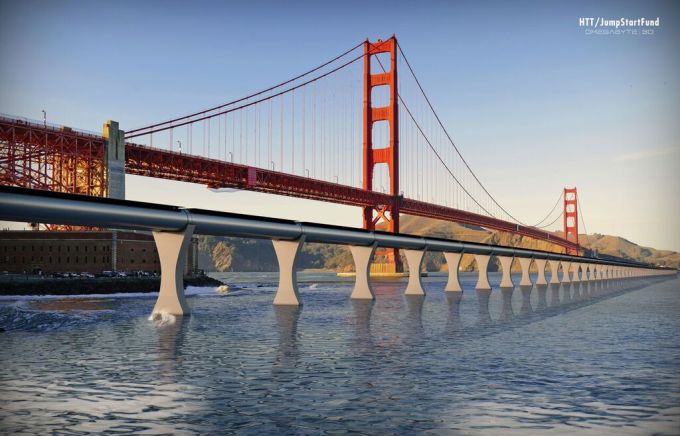 It’s early days for all parties and each one still needs to address questions like how this type of rapid acceleration might affect the human body, how to prevent passengers from getting trapped in capsules inside the system, deceleration techniques, and how to manage traffic.

The Hyperloop could change the way we travel or even commute to work on a daily basis. In the future, some of us might even find ourselves working in SF, but commuting from a much more affordable area far away from Silicon Valley’s outrageous rental environment.

Of course, the biggest question will be how to win over city and county governments to allow further construction of such a structure and which startup will prevail in the bid to build our human vacuum tube of the future.

Interview With Bibop Gresta At The World Economic Forum