CloudMagic, the makers of a popular mobile email client for iOS and Android which touts some 3 million users, is expanding to the desktop with today’s launch of a new Mac Store app. Available for OS X Yosemite and El Capitan, the universal mail client offers a clean user interface, with a host of features that will appeal to those in search of a more elegant solution for email management.

The app includes a variety of notable features, like a distraction-free writing mode; quick filters for viewing starred or unread mail; the ability to multi-select email for mass deletes, archives, or mark as read/unread; push notifications; support for handing off your activity from iPhone, iPad or Apple Watch to Mac; and more.

According to CloudMagic CEO Rohit Nadhani, the decision to build for Mac was a combination of user feedback and a desire to offer a consistent user experience across platforms – iPhone, iPad and Mac.

The company began designing the desktop version of the app in April, and kicked off the engineering by June. Version 1.0 was ready just before the end of the year, but the team decided to wait until after the holidays to launch, given that productivity apps aren’t the most popular downloads at a time when people are trying to forget about work for a few days.

As on mobile, one of the better features in CloudMagic for Mac is its support for nearly all top mail services, including Gmail, Exchange (ActiveSync, EWS and IMAP), Yahoo, Outlook, iCloud, Google Apps, Office 365 and any IMAP accounts.

The app pushes the email down from the cloud to your device, which can help you save on battery usage. 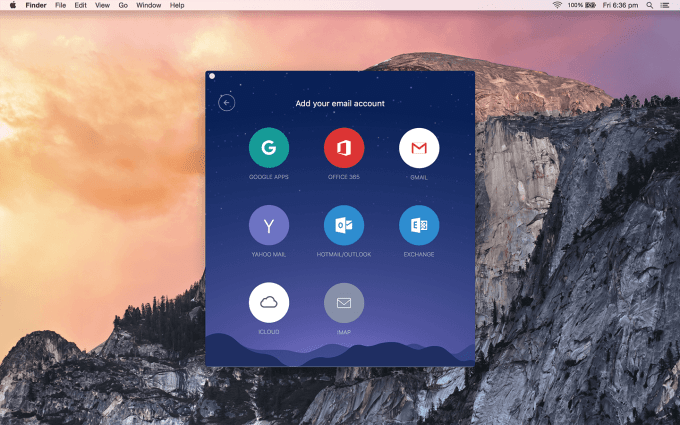 Like most mail clients, CloudMagic offers a standard feature set for working with your messages, including buttons for making messages as read or unread, archiving them to a folder, starring them or trashing them. But there are little things the mail app does that make the experience better – for example, these action buttons only appear when your cursor hovers over a given message while in the inbox view, which leads to a more minimalist user interface.

In the inbox view, there’s just a search box, quick filter buttons (for starred and unread mail), a compose button, a link to your user account and settings, and a button for selecting all your mail and then marking it read. Meanwhile, your folder list is tucked off the side and out of sight under a hamburger-style menu.

This minimalist look-and-feel carries over to other parts of the CloudMagic experience as well, including with the “distraction-free” compose mode which basically pops up a big, relatively blank screen where you start writing your email.

Reading emails is fairly distraction-free as well, as there’s nothing else surrounding your message thread – like side menus or options – while reading and replying.

The CloudMagic Mac app should appeal to those who prefer working with email in reverse chronological order, and who like to be able to quickly scan subject lines in order to determine which emails need your attention.

However, it – like many desktop email clients – may not be the best fit for power users who regularly configure and use a lot of Gmail filters, move in and out of folders a lot, those who rely on other web client-specific features, or those who are attached to specific inbox sorting tools, like Gmail’s “Priority Inbox” or Outlook mobile’s “Focused Inbox.”

That being said, the company has some plans for how it can inch its way into the power user customer base on the desktop. In the future, the plan is to add more features that will appeal to this crowd, including email tracking, mail merge support, and CRM integrations – or, as Nadhani points out, the top use cases for popular Gmail extensions.

“Gmail extensions don’t work on mobile and tablets,” he notes. “70 percent of emailing is now mobile. Since we control each and every pixel of the interface, we can build these features natively across all platforms,” says Nadhani.

The launch of CloudMagic for Mac is an important step for this company, which has been funded via the profits of another of Nadhani’s startups, Webyog.com. Until now, the company has brought in no revenue as its mobile applications were made freely available. Those apps have seen over 3 million sign-ups, with weekly active users growing 2 percent week-over-week, the founder says.

With the Mac app, CloudMagic is looking to start taking in revenue, as the desktop app is being sold for $19.99 on the Mac App Store.