Intel has made yet another hardware acquisition to build up its business of integrating its processors and RealSense imaging technology into the next wave of connected devices beyond PCs. Today the company announced it has purchased Ascending Technologies, a Germany-based startup that makes small drones and the software used to fly them.

Financial terms of the deal have not been disclosed but Intel described it to me as a “small company”. All 75 employees will be getting offers to join Intel, she added.

At a time when there is increasing regulatory and public scrutiny over drone safety and how they will be used, Ascend has touted its own software for its accuracy of movement, using LED-based “light painting” and long-exposure photography to show just how this works. 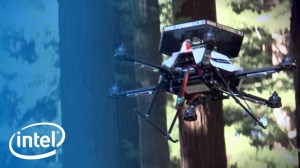 Intel Capital had invested in Ascending Technologies and it partnered with the startup last year, integrating its RealSense image and depth-recognition technology with Ascend’s own “sense-and-avoid” algorithms that are used in its own devices and also sold to other drone makers. It actually demonstrated the integration at last year’s CES event. Tomorrow CEO Brian Krzanich is delivering a keynote once more and may well be talking drones once again.

A spokesperson says that Intel will not be discussing and future product roadmap at this time. However, a blog post from Josh Walden, Intel’s SVP for new technologies, noted that Intel will continue to support existing customers.

“We plan for the Ascending Technologies team to continue supporting their current customers while also collaborating with Intel’s Perceptual Computing team to develop UAV technology that can help drones fly with more awareness of their environments.” Ascend says that there are “well over 1,000 of our unique aircraft solutions are in frequent operation worldwide.”

Intel has been making a number of investments and acquisitions in newer areas of technology beyond basic PCs as it continues to keep its eye on how to continue growing its business as more legacy forms of hardware continue to decline in sales and overall importance. Other areas have included activity trackers and smart eyewear.

This is Intel’s 71st acquisition.