Remember when kids just peered out at the stars, trying to spot the lights of Santa’s sleigh (or Rudolph’s shiny nose)? Well, those days are long gone. Santa tracking once again has received its annual digital upgrade. Today, Microsoft and NORAD begin tracking Santa along with Google, on its own just-launched Santa Tracker website. Google’s site this year offers a customized maps interface that shows where Santa is now, how far away that is from you, how many gifts have been delivered so far, and more. It even offers a Christmas-themed game called “Code Boogie” that teaches kids the basics of programming, along with other several other activities.

In the game, kids can make an elf dance by dragging and dropping basic dance moves like “point left” or “point right” onto the screen. The game offers two modes of play – one where kids match the teacher’s moves, and the other where kids can design their own dance by using elements like jump, split, hip shake and more to “program” their elf’s dance. 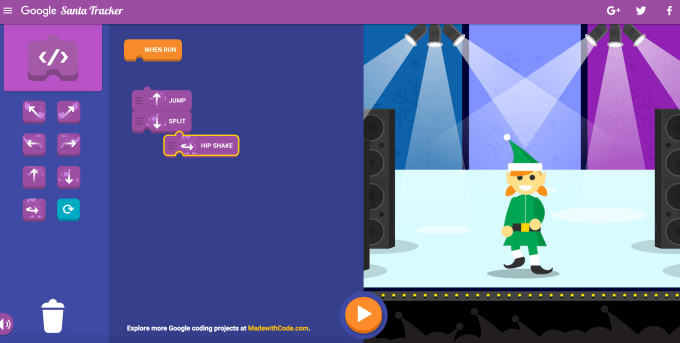 Also available via the Santa Tracker site are online games like “Present Drop;” an educational section to learn about Christmas traditions around the world; a tool that lets you translate then listen to holiday words and phrases like “Santa Claus,” “Season’s Greetings,” or even “Ho Ho Ho,” in other languages; a Google Maps interface that’s been customized to include a Santa icon; plus a whole village of other activities to explore.

As usual, Google’s site is engaging enough that you’ll actually be able to sneak in your last-minute gift wrapping while kids are glued to their computer screen. Or, if you prefer, Google’s Santa Tracker is also available as a mobile app for Android devices and as a Chrome extension.

Meanwhile, Microsoft gave Santa tracking an upgrade of its own this year, too, thanks to integrations with a variety of Microsoft tools including Bing, Windows Maps, Microsoft Edge, and Cortana.

Microsoft has again partnered with the North American Aerospace Defense Command (NORAD) for the third year to offer an online version of the NORAD Tracks Santa website.

This time around, the site includes a holiday-themed coloring book for Windows 10 devices and the Microsoft Edge web browser, a new image carousel of cities Santa visits, Windows Maps integration, games, holiday music, movies, educational content, and other activities, including one called “Operation Goodwill,” which, in the spirit of the holidays, will connect website visitors with people in need and military families.

The better part of Microsoft’s experience, however, is the Cortana integration. Using Cortana for Windows 10, iOS or Android, you can ask “Where is Santa?” and Microsoft’s virtual assistant will answer by showing visuals of Santa and details about where he is right now. Cortana also provides an automatic update on Santa’s location starting today. 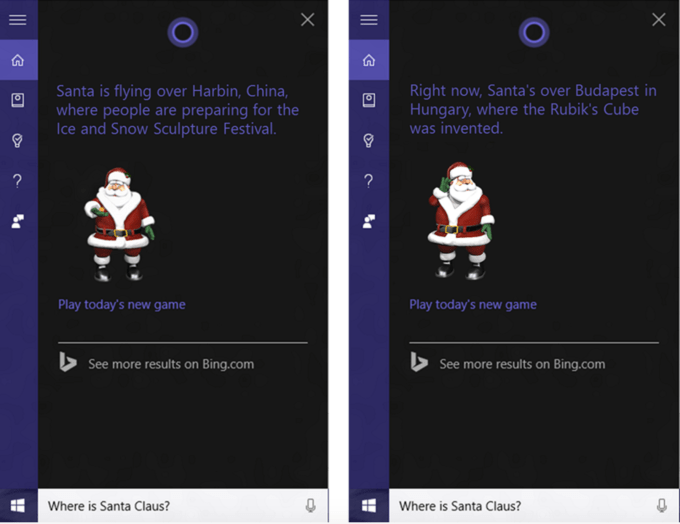 Getting Cortana involved in the Santa-tracking action is actually pretty clever – and highlights a missed opportunity for Apple’s Siri. When we asked the same question – “Where is Santa?” – to Apple’s push-button helper on our iPhone this morning, the assistant only replied, “In your heart. And at the North Pole. Mostly at the North Pole.” 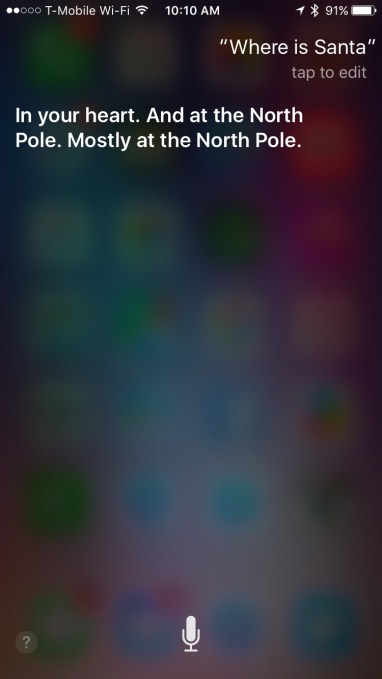 Accurate, I suppose. But certainly not as fun.