When the world is watching TV, that’s actually the easiest time to get famous on the Internet. Breaking news. Sports championships. Political debates. Whoever turns this live footage into online videos, GIFs, or memes the fastest can score insane virality.

Now an industry of tools is emerging to serve these real-time meme makers. And rather than let random people score these windfalls of eyeballs, content owners themselves, like sports stars and leagues, are stepping up.

MemeGenerator, QuickMeme, Skitch and GIMP let anyone easily lay text on images. GifGrabber and Imgur let you instantly cut GIFs from videos. PicPlayPost stitches images and videos into collages. But the high-priced ads and deep pocketed producers of video have made it the hottest medium in the meme businesses. 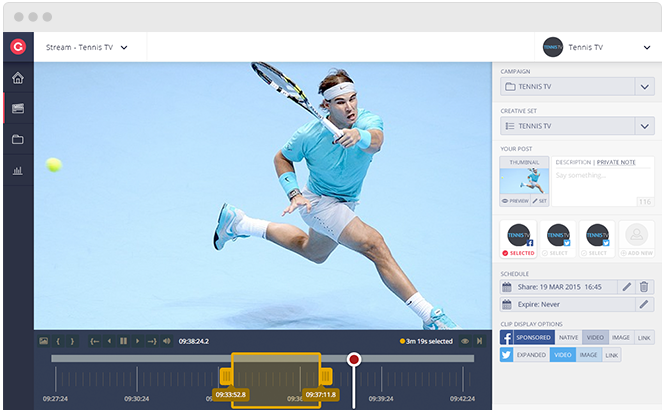 One of the most popular tools for quickly turning video content into shareable clips was SnappyTV, but Twitter acquired the company. [Correction: SnappyTV can syndicate to places other than Twitter.]

Since then, a goofy-named startup called Grabyo has arisen as a platform-agnostic way to dominate the second screen. Users can grab clips from a live or recorded video feed, use mouse tracking to follow the action and cut out a cropped piece of the footage, and instantly share it on Facebook, Twitter, YouTube and other platforms.

But how do you test a product built for mass virality? By letting sports stars invest. Football (soccer) heroes Thierry Henry, Cesc Fabregas and Robin van Persie, along with basketball star Tony Parker of the San Antonio Spurs, have all put money into Grabyo and will help the startup test and promote the product with their enormous social media followings.

Yesterday on stage, Henry and Grabyo CEO Gareth Capon came on stage at TechCrunch Disrupt London to discuss the future of virality. Henry explains that years ago when fans met him, they wanted an autograph. Then with the proliferation of smartphones came requests for photos with the Arsenal player. But Henry says “now when people meet me, they want to take a video with me…pictures are great but you don’t get the feeling of video.”

Grabyo started as a consumer product, but it’s shifted to focusing on serving video content owners themselves. That’s because otherwise it’s essentially a tool for micro-piracy. But pundits and opportunists will always find a way, so expect a boom of new creation tools designed to let people harness those global water-cooler moments.