Gifs are a diverse bunch, there’s  like ten million for everything you could ever think of but they’re pretty hard to find and the process for posting them is a little harder than it should be.

That’s why gif keyboards are so popular – they allow rapid access to the Internet’s library of moving images and you don’t have to go far to find them. Unfortunately, most of them aren’t all that great, but Giffage just unveiled one that may be the best one out there.

Instagram superstar Elliot Tebele, better known by his social media moniker Fuck Jerry, is a bit of a gif Jedi. He’s made a career scouring the Internet and reposting gifs and he currently boasts 6.9 million followers on Instagram, with sizable presences on Twitter and Tumblr as well.

Tebele collaborated on this 3.0 version of Giffage and was introduced to me as a co-founder, but following the new update, Tebele really has a chance to take the app mainstream as he utilizes his massive following and status as a meme wizard to lend the app some Internet street cred. 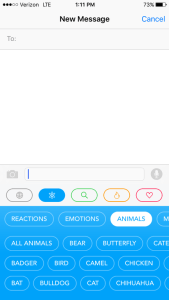 That’s highly necessary as the app looks to distinguish itself in a product field that’s been growing increasingly crowded lately, with offerings from gif powerhouses like Giphy.

Giffage founder Jack Shalom detailed that he had wanted to build a gif app that did it all. Gif keyboards (that are just okay) have been steadily gaining popularity in the past few months, but for the most part they’ve been introduced through single-feature apps that allow you to enable them but don’t give you much more functionality beyond that.

“Most of the public still doesn’t really know how to use [all of these apps], and I don’t think people are going to go out and download five different apps,” said Shalom. “That’s the issue.” 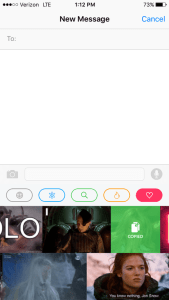 “Doing it all” meant introducing their own keyboard, and Shalom says his team has spent a lot of time putting all of their efforts toward building out a gif keyboard that’s “really just the best one available.”

Luckily for Giffage this keyboard really is freaking awesome, allowing users to scour apps by categories, search specifically for their favorites (powered by Giphy), browse trending gifs or their own saved (called “hearted”) gifs, make their own gifs through the app or easily type away on the keyboard without having to switch back to the standard iOS variety.

What makes this gif keyboard so noteworthy is that everything flows so nicely, and you’re allowed great access to find the gif you want in that exact moment effortlessly.

Giffage also introduced a new feature called Wallet that allows you to save any gif you see directly to the “hearted” section of the keyboard for later use. To users rocking the latest iPhones, Giffage also enables users to convert their fancy new Live Photos into gif files and enable more effective sharing across devices.

Speaking of new iPhones, this version of Giffage also adds in 3D Touch capabilities, allowing users quick access to search and other key features right from the home screen.

There are plenty of decent gif keyboards out there, but when it’s really important that I find the best crying Kim Kardashian gif at a moment’s notice, Giffage is there for me.

Check out version 3.0 of Giffage now in the App Store.