As more consumers shift to using online services for managing their banking, bills, payments, and more, some of our most important personal and financial documents are scattered across a number of websites – sites which don’t always maintain thorough archives of our past statements. A service called FileThis has been working to address this problem by offering a utility that automatically backs up your statements, bills and other files to the cloud service of your choice.

Now the company is debuting an entirely rebuilt version of its application, with the release of FileThis 2.0. The updated service no longer just pulls and organizes your files on your behalf, but more actively helps you track your accounts, manage your bill calendar, and even remind you to pay on time.

I’ve actually been using FileThis for over a year, allowing it to archive a variety of statements, including utility bills, like those from T-Mobile and Verizon, which I have to submit for expenses, as well as bank statements. It’s actually been far easier to allow the FileThis utility to connect to my online accounts and pull items on my behalf, rather than visit each website directly and download the PDFs manually.

The process of using FileThis is not all that different from using a service like Mint.com, though FileThis is not limited only to financial accounts. It also works with accounts from utilities, communications companies, insurance providers, retailers, and more. In total, there are over 500 U.S. businesses and service providers you can reach via the service.

However, the earlier version of the FileThis service was a bit rough around the edges. It was functional, but not pretty. It’s a testament, then, to its usefulness, that I’ve maintained an account there so long. However, at best, it was a “set it and forget” kind of utility – once FileThis was up and running, you didn’t need to return…except to occasionally re-authenticate your connections.

That changes with the launch of FileThis 2.0, which introduces an improved user interface and experience, as well as an expanded feature set that makes the service more of a personal assistant that you engage with on a regular basis.

When FileThis users log into the upgraded service, they’re presented with a dashboard giving them an overview of their upcoming bills, their accounts in FileThis, and where they’re choosing to store their documents (e.g. places like Google Drive or Dropbox, for example.) 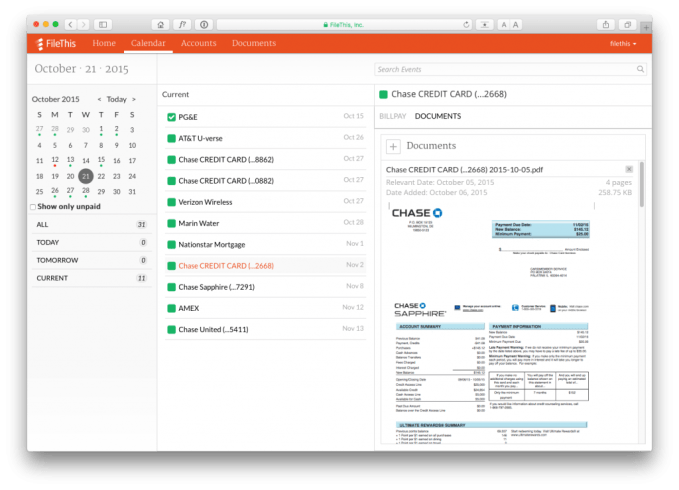 You can navigate using the toolbar at the top to move in between areas like “Accounts” and “Documents,” to change your settings, or view a “Calendar” that displays your bills and their upcoming due dates.

This is smart because it represents the way most people think about their finances – unless you have enough of a buffer in your bank account to auto-pay all your incoming bills, you probably keep track of due dates in some sort of timeline-focused way – like Google Calendar, a spreadsheet with dates, or some online or mobile application. FileThis, then, wants to be that application.

The only downside is that FileThis doesn’t let you click through and actually pay your bills. But the company tells me that feature will likely arrive in the next version, along with the Android release of the app in 2016. That will make FileThis a real alternative to whatever bill tracking system you’re using today. 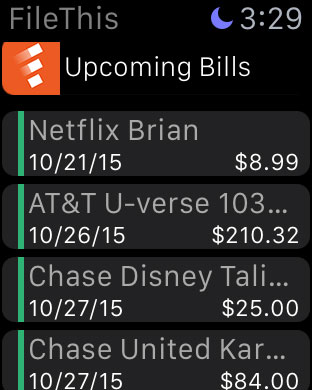 In addition to the now HTML5-friendly site (goodbye Flash!), FileThis 2.0 is also rolling out to iPhone, iPad and Apple Watch. This cross-platform support means FileThis can send bill reminders as notifications.

The service also now supports users who want to scan in receipts and other documents as well, so they can use FileThis as their online filing cabinet for their finances. For example, FileThis will automatically recognize tax-related statements, like W-2’s and 1099’s, to help you with your tax preparation.

“FileThis 1 was very document-centric, and while documents will always be a huge part of FileThis, FileThis 2 moves us to an account-centric model,” explains CEO Brian Berson, describing the 2.0 update. “Think Mint meets Evernote.”

Berson says the startup has seen over 600 percent growth since its launch in March 2014, and has delivered over 9 million documents to end users since that time. The hope is that those numbers will increase substantially with the 2.0 release, which will help with the company’s current fundraising aims. 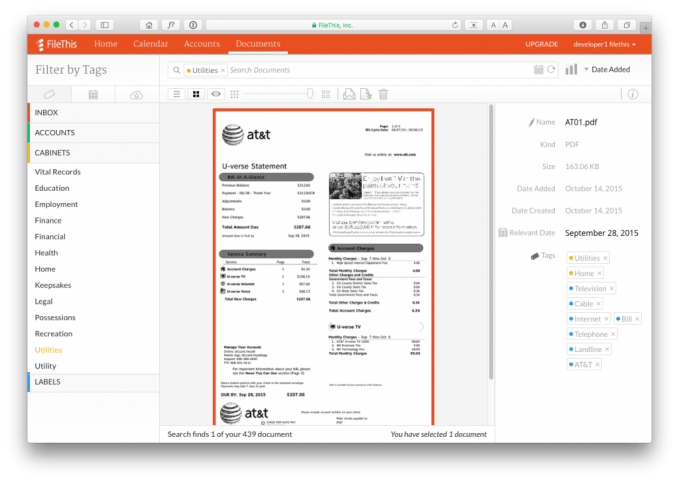 The product is a freemium service that charges more based on the number of connections, how often it runs, and how much storage space you need on FileThis’ own cloud storage service, if you choose to use it. The user interface to this cloud storage site is handy because it automatically organizes files for you, while also supporting search, tags, sharing, printing and more.

The company’s premium packages are low-priced, at $2 or $5 per month, depending on your preferences, for those who want to upgrade. I’ve been surviving on the free plan, however, which offers up to 6 connections.

FileThis is currently backed by $2.5 million, according to CrunchBase.