Amazon may be leading the internet-of-things market when it comes to push-button ordering via hardware devices like its Dash grocery scanner and Dash buttons, but it’s not without its competition. Today, a company called hiku announced the second generation of its own shopping button, which now allows customers to order groceries from Walmart’s online service as well as Peapod, an Instacart rival in the Northeast U.S.

As with Amazon’s Dash scanner, hiku customers can speak or scan items they want to order, which are stored on a shopping list and matched to online inventory at Walmart or Peapod, depending on your preference.

The device itself, for those unfamiliar, is a piece of hardware with a button you press before speaking into its microphone. You can also use the Wi-Fi connected handheld device to scan grocery items from your fridge or pantry, which are then synced to hiku’s mobile app for iOS or Android. 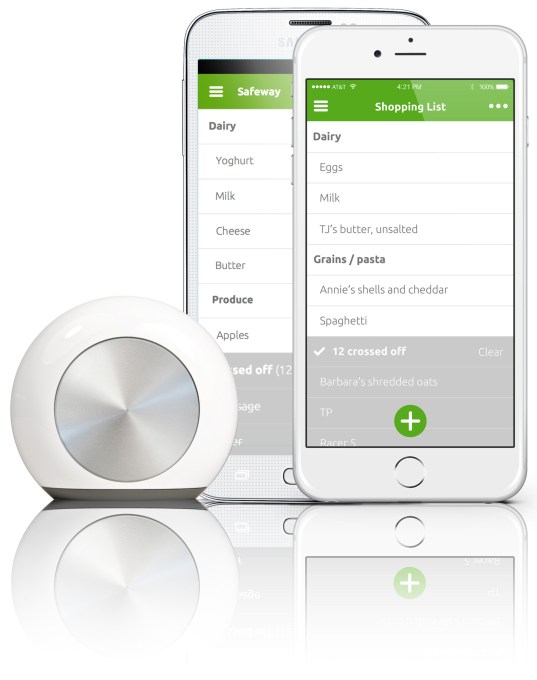 Founded in 2012 by two ex-Palm engineers, Rob Katcher and Rajan Bala, hiku actually debuted just ahead of Amazon’s Dash, but will likely benefit from Amazon’s entry in the space as Dash’s existence is helping to educate consumers about how shopping gadgets can work.

This latest version of hiku’s scanner includes a number of  improvements over the debut release, including instant-on for faster scanning and voice recording, improved audio capture for better voice recognition, and greater resistance to spills, the company says.

That first item is a much-needed tweak from generation one, as before, consumers would have to wait a couple of seconds for the device to connect to Wi-Fi before they could use it. Now, they’re able to just walk up, press the button and speak their item, like “paper towels,” for example, Katcher explains.

As for the voice recognition, this has also seen an upgrade. “Hiku now includes a digital microphone with better audio isolation, as well as louder ‘beep’ feedback so consumers know their voice has been recognized,” says Katcher. And, he adds, the device is more “kitchen-hardy,” too, with improved sealing to fight day-to-day wear, including from flour or water spills, for instance.

Of course, the more interesting upgrade with the new hiku is on the software side. The company is one of the first to use Peapod and Walmart’s APIs to connect to their grocery shopping businesses.

Peapod currently offers delivery and pickup in 24 markets across 13 U.S. states, mostly in the northeast.

Meanwhile, Walmart’s online grocery shopping service, has been rapidly expanding in recent weeks, and is now live in over 20 U.S. cities. 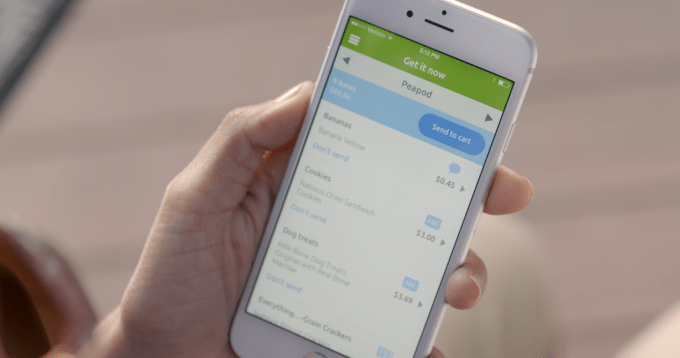 To use this feature, you don’t necessarily have to scan a barcode in order for hiku to find an exact match between a given SKU and online inventory. Instead, you can ask for generic items like milk, eggs, or bread, and hiku will shop for you choosing those products that make sense, based on your prior choices. In other words, the software learns the more you use it.

In the app’s new “Get It Now” section, customers can also review their list and see how it’s matched up with online inventory at Walmart or Peapod, then edit items as they choose. When you tap on an item, hiku will show you alternative products, and it will remember your selection for the next time.

Typically, the device sells for $79 – a bit steep for a convenience item like this. However, the 2nd generation hiku is going to be available for $49 from today through the end of the year, in an effort to boost sales. The original hiku will be no longer be sold, though early adopters will be able to use the Walmart/Peapod ordering feature using their existing app and hardware combination.

Given the startup’s still early stage, execs declined to speak about shipments or sales figures at this time. Though Amazon is helping carve out a market for devices like this, hiku is still early on the scene – push-button ordering is not yet proven or mainstream. That could be a challenge for hiku going forward.

Still, Hiku has a bit of cushion for now. The company has raised $3.9 million to date from investors including Firsthand Capital , Jerry Yang’s AME Cloud Ventures, and Ash Patel at Morado Ventures to continue to grow its business.