Trident is a remote-controlled, camera-equipped underwater drone – and it’s the fastest machine yet from underwater robotics startup OpenROV.

Trident can go “as fast as Michael Phelps,” according to co-founders David Lang and Eric Stackpole. For reference, Phelps clocks in at 4.4 mph if you factor his record for 50.77 seconds in the 100 m. So that’s faster than a goldfish, but not as fast as one might think. It’s still pretty fast as far as underwater vehicles, or even some drones go, though.

The other cool thing about Trident is its ability for precision maneuvers. Trident can swim in long, straight lines called “transects” but also stop on a dime and execute moves in tight spaces, using any kind of gaming controller (we tried it out with a Playstation controller hooked up to a PC monitor).

That sort of quickness and precision is helpful when traversing underneath the sea. Trident can hover over objects or change depth or direction without pitching at high or low speed. The added ability to stop exactly where you want to further explore a sunken ship (possibly with buried treasure) is a boon to underwater exploration.

Trident and other OpenROV vehicles can also go pretty far down into some of the deepest depths of the ocean, much farther than most human explorers. Trident can get to 100 meters below the surface – the technical limit for humans in underwater deep diving.

The underwater drone can stream live video to a monitor during explorations and the team at OpenROV is currently exploring VR so those playing with one of these drones can feel like they are right there in the depths with their vehicle.

People are coming up with all sorts of uses for VR, but Trident would make a perfect case for the classroom. “Imagine a teacher in the future using this in class and all the kids can put on their Google VR headsets and see different things around the ocean,” Lang said.

OpenROV started out as a project among friends to get to the bottom of an underwater mystery. Legend had it a group of Native Americans had dumped a bunch of gold at the bottom of a well, deep within the Hall City cave in Hayfork, California back in the 1800’s. I first wrote about this OpenROV and this underwater endeavor for USA Today in November, 2013. 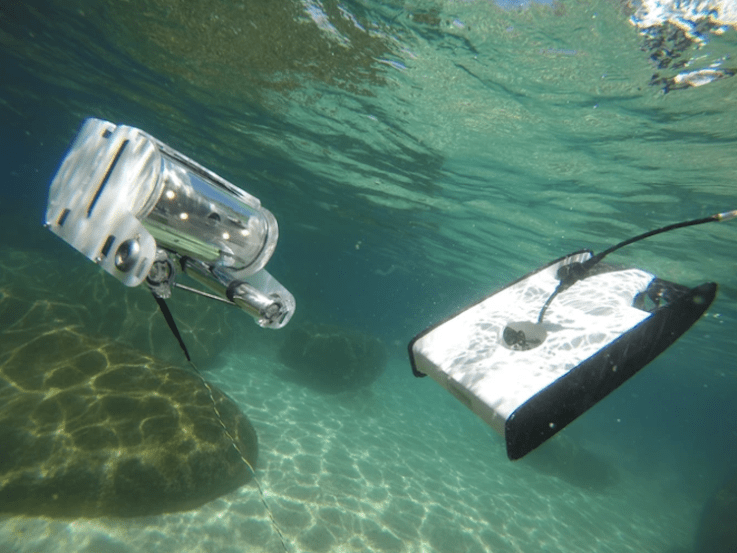 The founders have yet to get to the bottom of that well (they tell me they went as deep as they could go with their rovers and still couldn’t reach the bottom), but did start get a company because of it a couple years ago that would make simple, lower-cost underwater drone DIY kits available for everyone. OpenROV took in a tidy million dollar sum of venture capital since to explore new designs, including the Trident.

OpenROV is in the last days of its Trident Kickstarter campaign (closing tomorrow at midnight). So far the campaign has raised nearly $800,000 to date – much more than the original $50,000 the co-founders initially sought.

I recently went to OpenROV headquarters in Berkeley, California where the team designs, manufactures, ships and supports the robots. Stackpole gave me a tour of his open garage in the heart of an industrial park and let me play with the Trident in a tank of water the team set up for testing purposes. Check out that interview above to find out more.