The Seattle-based online home services platform Porch.com today announced that it has acquired Fountain, a service that connects Internet users with doctors, lawyers, mechanics, tech support and other experts through video chats, texts and annotated photos.

Fountain was co-founded by Aaron Patzer, who is best known for founding and leading Mint.com. Patzer, who was also Fountain’s CEO, will not join Porch, however. Instead, he is relocating overseas for personal reasons. Porch tells us that Patzer will remain a product adviser for Porch, though, and that his co-founder and CTO Jean Sini will lead Porch’s San Francisco office. 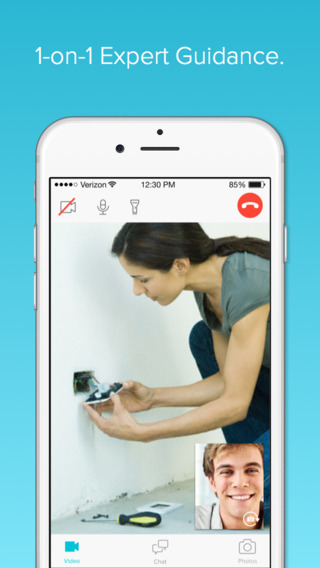 Fountain launched in beta almost exactly a year ago. The company raised $4 million in funding from Shasta Ventures and First Round Capital, but it has mostly remained under the radar and never became a household name. The Fountain iOS app currently has only 50 reviews, though those users almost unanimously gave the app a five-star rating. The financial details of the acquisition weren’t disclosed.

In many ways, Porch and Fountain have similar aims. Both try to connect users with experts. For Porch, though, this mostly meant a physical connection while Fountain was focused on the virtual realm. By adding Fountain, though, Porch will now take a step toward integrating this kind of virtual help for do-it-yourselvers into its platform as well.

Said Matt Ehrlichman, Porch’s CEO and chairman: “With the acquisition of Fountain, we will take huge steps forward with our consumer experience, helping homeowners get connected with the very best Guaranteed Professionals or now complete projects themselves with help from Home Experts, powered by Fountain’s natural language search, artificial intelligence, and communication technology.”

Patzer echoed this sentiment. “I’m really happy to announce the acquisition of Fountain by Porch.com. Fountain has worked hard to ensure you can access a live professional over text, talk and video chat in about a minute,” he said. “With Porch + Fountain, not only can you access an interior designer, architect, gardener, electrician, plumber or appliance repair expert in about 90 seconds, but if you get stuck on DIY, Porch can send a professional to your house. The combination is transformative for anyone who owns a home.”

It’s unclear how many people used Fountain or how many traction it had. Porch, on the other hand, has never been shy about releasing stats about its usage. The company says it delivered $1.8 billion in potential new business to about 100,000 home improvement professionals on its site in the last year (though the use of “potential” obviously means there’s some wiggle room here). The services now has a total of 3.4 million professionals on its service and features date from over 138 million projects in its database.

In addition to today’s acquisition, Porch also today announced that it has hired Microsoft veteran Eric Doerr as its Chief Product Officer, and Jim Dantlzer, the former head of UX design for Amazon Instant Video, as its VP of design.