Chrome OS, the “cloud” operating system that Google introduced for laptops, and Android, the operating system on phones and tablets, may become one, according to a report by the Wall Street Journal. The “folding” could happen as early as next year…could be introduced at next year’s I/O…or not.

I’ve spoken to sources over the past few years about it, and some played the “one could imagine” game when discussing a “merger” of the two projects. The chatter increased when Android co-founder Andy Rubin left the company last year.

What we do know is that neither operating system is being “killed off.”

Here’s the deal. Mobile rules the world, and Google’s CEO Sundar Pichai (he previously oversaw Chrome, Chrome OS, Apps and added Android to his purview in 2013) stated as such during Alphabet’s recent earnings call. It’s no secret. There are elements of Android that make it a far superior operating system than Chrome OS. But you know what? Chrome OS does a hell of a job relying on Google’s browser, which is by the far the top browser among internetters. 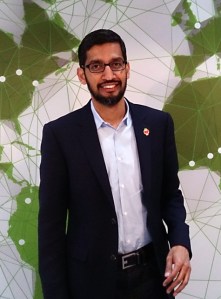 What Chrome OS lacks is native apps, and that’s what gets developers excited and consumer’s minds swirling about possibilities. In fact, Chrome OS is quite boring. So boring that schools love them. Big companies are taking a look at them. Because of Google Apps. Chrome OS always felt like it could be a “mode” that you should be able to turn on within Android. For when you had a shitty Internet connection or just wanted the bare bones to get work done. Regardless, the ecosystem is alive and well.

If Pichai’s cry for mobile, mobile, mobile weren’t enough to tip the hand that this may happen, the announcement of the Pixel C sure was. A kinda-laptop-tablet-running-full-on-Android.

Then there’s the Fast Company article that featured Hiroshi Lockheimer (SVP Android, Chrome OS and Chromecast at Google), where this topic kinda/sorta/definitely came up:

Toward the end of our conversation, I asked Lockheimer how much time he spent thinking about Android’s and Chrome OS’s future past the next release or two, and what they might look like a few years from now. I thought I was giving him an opportunity to wax eloquent on pie-in-the-sky stuff. Instead, he stayed practical, and said that developing operating systems can’t be done in isolation from the components they use and the devices they’ll run on. Running engineering for these two operating systems requires him to think about everything from chips to merchandising.

In the same piece, he pointed to the fact that you can unlock a Chrome OS laptop with an Android phone. You get the idea.

The whats and whens aren’t known, but I can tell you that all of the work that Google does feeds its beast. Whether products come and go or get folded into other things, the decisions come with all of the work and learnings that have been done to back them up. Hits feed prior misses. Misses feed new hits. The company is a nesting doll when it comes to products and code, with each new thing somehow relying on the last thing.

I tend to think of things as “all” instead of “either/or” when it comes to Google (and its mothership, Alphabet).