During an enterprisey event at Google SF today, the company announced a brand new Chromebook for enterprise, built by Dell.

The Google for Work team has been tailoring all of Google’s consumer software products for enterprise use. That means security, security and more security. Yes, to get computers blessed by a huge corporation, those things have to be pretty bulletproof.

To get its foot into the workplace, Google and Dell’s new 13 inch Chromebook sports the following: integration with VPN services, virtualization (seeing Microsoft Office run on Google Chrome is weird), use of native file storage, Chrome management enhancements, extended printing support and PLUS identity networking at certificates.

The big question is “Will companies who have relied on Microsoft make the move?” Google was pretty stoked to share that Netflix and Starbucks are starting to adopt Chrome OS, hoping that those landmark deals spark the interest of others who are looking for a change. Google argues that its line of Chromebooks are popular in the education sector, proof that they can adapt to enterprise. Schools have similar needs, such as security and ease of administration.

This isn’t going to happen overnight, Google and Dell are showing us that it’s “possible.” To get the wheels moving in a large organization like Netflix, a lot of people have to sign off and get involved. Getting that CIO buy-in is an absolute nightmare.

There are a lot of reasons why Chrome might not make sense in enterprise, one of them is that legacy apps just haven’t been rewritten in bulk yet, not enough to make the switch overnight. Rewriting legacy apps at a company like Netflix might not take long, but older and less technical companies have stayed with what they have for a reason.

Change is hard. And expensive.

Regardless, here we are. We have a new laptop for the workplace. The “Dell Chromebook 13” sports a 13.3” IPS screen (touch or non-touch), 1080P FHD Only, uses a 5th Gen Intel processor (Celeron for the lowest end model), weighs 3.23 pounds, has a 12+ hour battery life and is dropping at a very comfortable price point of $399 (all the way up to $899 with other configurations including more memory and the like). It’s available mid-September.

The company also believes that while the price point might be right and the software isn’t bloated like other current competition, the global management that can be done with a workforce on Chrome is pretty unmatched. 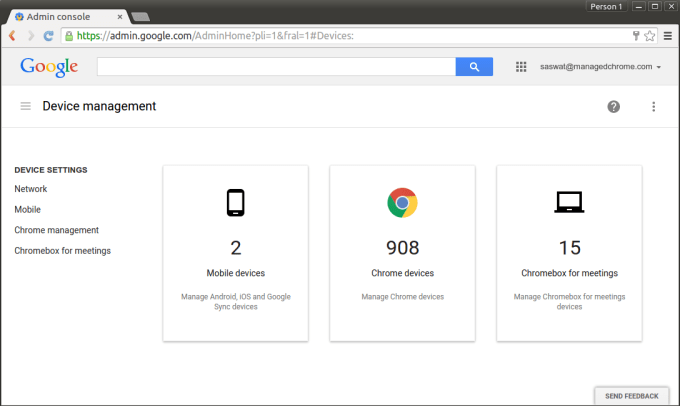 Again, enough to make companies change today? No. Enough to get those same companies at least inquiring about switching over to the Chrome platform? Perhaps.