Microsoft announced today it will roll out new versions of its flagship mobile email application, Outlook for iOS and Outlook for Android, which combined, reach nearly 30 million users, the company says. The upgraded app on iOS largely received visual tweaks and fixes, focused on saving users time and improving navigation, while the Android version will soon feature a Material Design look-and-feel and other user interface improvements.

However, the bigger news is that Microsoft plans to integrate the functionality from its mobile calendaring app Sunrise into Outlook, then shutter the Sunrise application when the integration completes.

This plan has been in the works for some time, we’ve heard, though it’s not necessarily something the Sunrise team is thrilled about. As you may recall, Microsoft bought Sunrise earlier this year for north of $100 million. The app was one of several popular mobile calendaring competitors at the time, including rivals like Fantastical 2, Tempo, Any.do Cal and others.

However, in Microsoft’s opinion, it doesn’t make sense to maintain two separate mobile calendaring products. Instead, the company is going all in on mobile Outlook – another app that came in by way of acquisition. Originally, Outlook was a startup called Acompli before joining Microsoft following a $200 million deal, where it was quickly rebranded as Outlook.

Though the email app was barely getting off the ground at the time of the acquisition, Microsoft today says that Outlook on mobile is seeing 1.2 billion sessions per month, and that one in five users add more than one email account to the application.

“These numbers show what we’ve known for some time—despite reports to the contrary—email is a key communications channel across all parts of our life, and there is growing demand for a mobile email experience that helps to effectively manage those conversations,” says Javier Soltero, former Acompli CEO, now corporate vice president for the Outlook team.

“We made terrific progress over the last nine months, but we are just getting started,” he adds.

Currently, Outlook’s biggest selling point is that it makes it easier to be productive in email while on the go, by allowing users to attach and view files from online file storage services, like OneDrive and Dropbox; access all their contacts, calendars and attachments from one interface; check their availability and book meetings on the fly; and more.

But Sunrise is a richer calendaring tool – it includes social features like “Meet,” a way to schedule meetings from other messaging apps; integration with favorite apps like Facebook, TripIt, Wunderlist, Evernote, Asana, and others; integrated weather forecasts and directions; as well as the ability to access third-party calendars like those for sports teams and TV shows.

The app also has an appealing user interface and design that has brought in a number of fans. 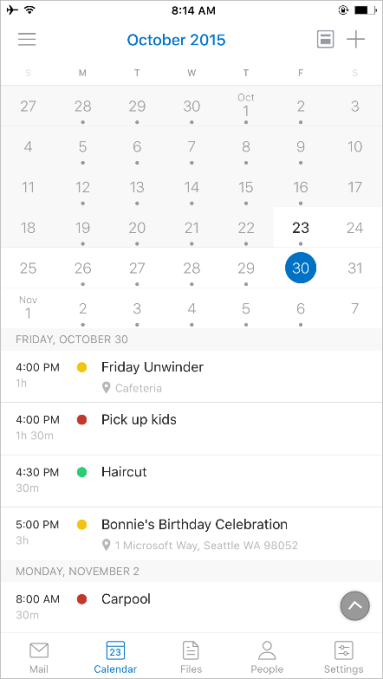 Some of these features will now come to Outlook, says Soltero in a blog post detailing the changes, including the addition of the “interesting calendars” and connections to other favorite apps and services. Outlook will also improve its ability to create meetings on the go, and handle meetings across time zones. When the feature integration is complete, the Sunrise app will be shut down. This process could still take months, however – so you will have time to seek out a replacement calendar, if it’s not going to be Outlook.

Sunrise’s shutdown may come as a disappointment to those who prefer its interface, or who just like using dedicated apps for specific tasks. However, it makes sense that Microsoft would want to put the technical and design expertise behind its bigger brand name application and its growing number of users. Plus, Microsoft plans on releasing a version of the app for Windows Phone soon, which will bring in even more users.

The updated version of Outlook on iOS is rolling out today. Meanwhile, Android users can expect to see an update beginning in early November.