Economists tell us that the history of human labor is one of continually increasing specialization. In the days of the hunter-gatherer, every member of the tribe would have been expected to command some degree of proficiency with each task.

As we progressed along the economic continuum from hunter-gatherer through agrarian and industrial and now into post-industrial economies, the labor force has become more fragmented, with workers having more and more specialized skill sets.

Historically, specialization has been a path to prosperity. Although specialization has certain economic advantages, in the era of technological convergence, well-educated generalists will be those who are the most valuable. It is time for a renaissance of the “Renaissance Man.”

The idea of the “Renaissance Man” or polymath came about during the Renaissance period, and is the idea that anyone who applies themselves can be exceptional at poetry, art, science, mathematics, athletics and any other field that catches their attention.

The Renaissance thinkers recognized both the potential of individuals as well as the enormous value to being well-rounded.  Unfortunately, somewhere along the way the idea of someone who dabbled in many fields lost its cultural appeal and we began to praise those who sought deep subject matter expertise.

Historically, specialization has been a path to prosperity.

We now live in a world where distinctions between formerly separate industries are breaking down and the real opportunities for growth are where those industries intersect. Harnessing these 21st-century opportunities will require people who are “jacks of all trades, masters of none,” or, perhaps more accurately, master polymaths.

Being a polymath is not only an advantage in the modern economy, but it is extremely efficient. Many people are familiar with the Pareto Principle, or as it is more commonly known, the 80/20 rule. The 80/20 rule is a specific expression of the power law and says, in many instances, 80 percent of the outputs are the result of 20 percent of the inputs.

While the 80/20 dynamic is powerful enough, it only gets more lopsided as it progresses. Consider, for instance, that with only three steps you arrive at 0.16 percent of inputs being responsible for an astonishing 41 percent of output. Figure 1 demonstrates how quickly the Pareto Principle results in astonishing force multiplication.

The implications of the 80/20 rule are powerful. For instance, many organizations could focus on satisfying the needs of only 20 percent of their customers and still maintain 80 percent of their revenue. Imagine what those businesses could then do with all the resources they’ve saved. As humans we are predisposed to linear thinking, which makes the implications of a power law distribution hard to internalize.

Figure 2 contrasts the relationship between effort and results in an 80/20 world with an imaginary world where every unit of input yielded the same marginal output. The area under the curve essentially represents the opportunity presented by applying the Pareto Principle. The simple takeaway: Stop beating your head against the wall on the far right side of the figure. 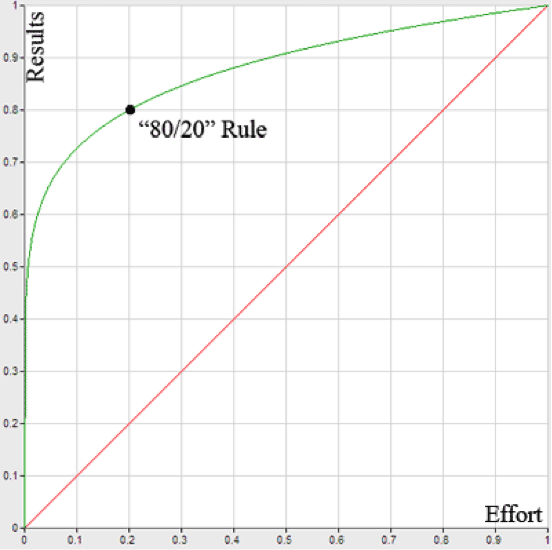 Where I think the Pareto Principle is at its most interesting is when thinking about our own growth potential as human beings. Imagine if you had 100 units of learning (like experience points in a role-playing game) to assign to various skills throughout your life. How should you spend those points? Do you spend all of them in one subject and try hard to become a true subject-matter expert? Or do you diversify your skill set, trying to make yourself into a well-rounded person?

These questions are some of the most fundamental questions we face as humans. Who do we want to be and what do we want to do with our lives? The Pareto Principle says that you will overwhelmingly get more bang for your buck if you spread those points around (see Figure 3). 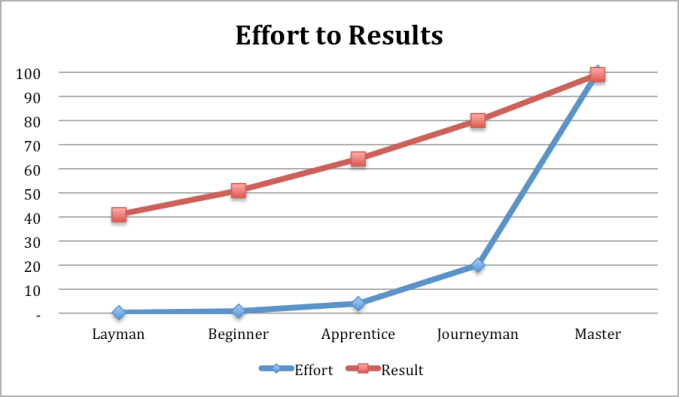 Intuitively this feels right. If someone were to spend .16 percent of 20 years (12 days) in focused study on a subject, they should be able to achieve cocktail-party mastery of that subject. Similarly, someone who spends .80 percent of 20 years, or about two months, in focused study on a subject should still be deemed a novice, but could be ready to begin a career in the field. A great example of this is the ability for laymen to enter coding boot camps and graduate months later prepared to enter the job market as software developers.

While the numbers in Figure 3 align fairly closely to my own observations, I don’t want to imply that these numbers are in any way a precise representation of the world. While the Pareto Principle is most often 80/20, there are plenty of 70/30 or 90/10 examples, as well. The point is, since learning follows a Pareto distribution, no matter which numbers you plug in, there is value to diversifying your skill set.

Why We Need More Polymaths In Tech

To build the cross-disciplinary companies of the future, we need a pool of cross-disciplinary expert polymaths from which to draw. Self-driving cars don’t just need automotive engineers, they need people who understand software, traffic engineering, the psychology of drivers and regulatory processes.

Formerly separate industries are breaking down and the real opportunities for growth are where those industries intersect.

There are two ways to assemble teams for building cross-disciplinary companies. You can either hire a few polymaths, or you can hire a large team of crack subject-matter experts. Unfortunately, the latter strategy has two huge limitations.

First, the strategy of assembling a group of disparate subject-matter experts to build a cross-disciplinary company invites organizational morass. Without sufficient polymaths to function as the glue between these experts it is very hard for these kinds of teams to pull in the same direction.

Second, and more importantly, the cost in time and money to assemble a large team of diverse subject-matter experts is exponentially higher than hiring a team of polymaths. These high costs will make it much more difficult for entrepreneurs to be the driver of the cross-disciplinary companies of the future. As cross-disciplinary companies make up a larger and larger portion of innovation, innovation will become the sole province of corporate R&D departments (see self-driving cars).

If we want entrepreneurs — and not corporate R&D — to continue to be the largest driver of the U.S. economy, we need a renaissance of the “Renaissance (Wo)Man.”

Applying The Pareto Principle To Your Life

There are four very practical implications of the Pareto Principle for how we live our lives.

Diversify your learning. If you give up on the idea of mastering any single topic (20 years) in the short to medium term, you could instead reach Journeyman level in 3 subjects (12 years), Apprentice level in 6 subjects (5 years) and beginner level in 18 subjects (3 years). To reiterate, beginner level is still equivalent to 2 months of concerted study.

In the modern world, where a very common job might require someone to be a social-media expert, public speaker, writer and data analyst, the polymath wins and the deep subject-matter expert is relegated to a back corner to be used as a resource for others. As an investor, if I were going to pick the perfect team, it would be a group of rock-star polymaths with a single subject matter expert as a resource.

It’s never too late. One particularly empowering implication of the Pareto Principle is that it is never too late to get a new start in life. Someone who has spent 30 years meandering through the world can dedicate themselves to new areas of study and within a relatively short span of time can reach levels of proficiency not terribly far off from others who have dedicated their life to the same subject.

If you don’t take the reigns of your own destiny, you will increasingly be pigeonholed.

As an example, someone could pick up cybersecurity as a specialty, spend 4 years on the subject (roughly hitting the magic 10,000 hours) and have 80 percent the proficiency of a lifelong expert. This is even truer in technology fields; because they evolve so quickly, old leanings are rendered obsolete.

Level the playing field. For people who learn more slowly than others, they can apply the Pareto Principle to level the playing field. While others spin their wheels trying to gain the last bits of insight in a single field, learners who play the game can quickly accumulate a broad set of skills and insights to help them succeed in life. Once you get past a certain baseline IQ, there is very little correlation between IQ and success.

Learn with intention. Finally, it is important to learn with intention. Many people stumble from place to place in life, simply letting their careers develop organically. This is a terrible “strategy,” as our culture is predisposed toward increasing specialization over time. If you don’t take the reigns of your own destiny, you will increasingly be pigeonholed in your career and in your life.

If you’ve ever wondered why professors are often unable to connect the dots between their own fields and the real world, or are often socially inept, it is because they have sacrificed a great deal of their potential understanding of the world so that they can gain a relatively minor (but significant) deeper understanding of their one or two chosen topics.

By contrast, the one characteristic that commonly unites the movers and shakers of the world is an insatiable need to consume content on wildly varying topics. Those who consciously or unconsciously apply the 80/20 rule to their own development emerge as business, political and social leaders. These are the people whose vision is seemingly prescient, and who can bring together disparate groups behind a common cause. These are the people who will build the American economy for the foreseeable future.