Facebook has been allowing users have a lot more fun with their profile pictures lately. Last month, the company introduced support for 7-second, looping videos instead of static images as well as new, temporary profile pics that let you show support for a cause, like users did with gay marriage by making their photos rainbow-colored. (These will later revert to your original photo after a designated period of time.)

Now, Facebook is trying out another new idea – it’s letting users decorate their profile image with a custom frame, this time as a way for college sports fans to show support for their favorite team.

The “team frames,” as they’re called, were designed by the schools themselves, who then worked with the Facebook product team who earlier rolled out the other, new expression tools for Profiles, including videos.

There are currently frames available for 8 teams. The University of Florida was the first partner to test the expiring frame feature, but now Facebook says it’s rolling out the capability more widely. In addition to the Gators, the seven other teams currently participating include those from Miami, Nebraska, Oklahoma, Ohio State, Michigan, Oregon and Texas. 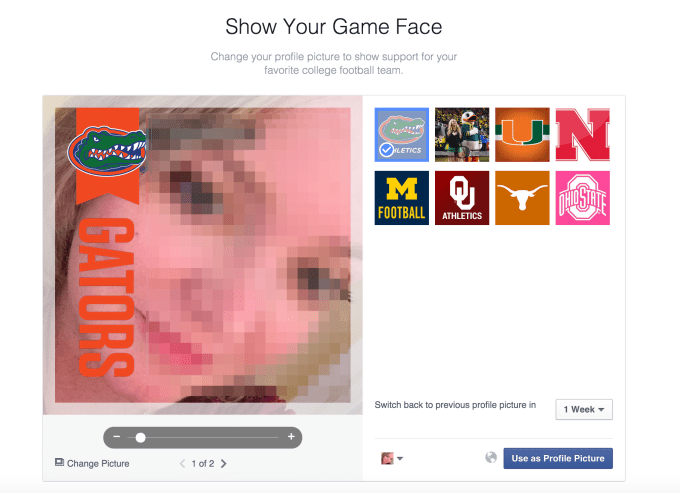 These frames are basically a variation on the “temporary” profile pictures announced in September, except that instead of shading the photo, they add a border to it. But like other temporary profile pics, the frame will disappear after a certain period of time, leaving you with your original profile photo.

That specified time frame is up to you, however. Facebook will offer a set of pre-populated choices, like a day or a week, but users can also customize it to their own preferences. For example, they may want to have the profile pic revert after the weekend’s game ends. Another nice touch is that when these profile pictures change back, they do so without a News Feed story. (Helpful, I suppose, for the times your team didn’t win, and you don’t want to encourage commenting on that fact.)

Of course, for staunch supporters who want to leave their profile picture in the team border indefinitely, a “never” expiration option is also available.

To take advantage of this new feature, Facebook users will first have to visit the Facebook Page for their favorite college football team. On participating pages, there will be a post showing an example of the custom team picture frame. At the bottom of the post, users can tap on a “Try It” button next to a prompt that says “Decorate your profile picture like this to support your team.”

You can also access the “Try It” option from friends’ posts if they’ve already used the feature, the company notes. And at the time you’re adding on the frame, you can choose to snap a new photo or you can pick from existing photos.

According to the Social Media Manager for the Florida Gators, Bruce Floyd, whose school was the first to adopt the feature, tens of thousands of fans added the Gators logo to their profile photos which led to millions of impressions across Facebook.

In this case, the temporary profile pic is aimed at just having a little fun on the site, but in other cases, users have been changing up their photos in support of more serious causes. For instance, at least 26 million users turned their photos rainbow in support of gay marriage, and before that, many had gone green to promote Arab Spring.

Some argue that these sorts of activities are shallow ways to show support – better would be actually donating time or money to various causes. (Malcom Gladwell once wrote an entire essay about the laziness of social media activism, in fact.) But on the flip side, there’s something to be said for the psychological effect of seeing a sea of support for a given cause flood your Timeline – it could force people to reconsider their opinions as they find themselves one of only a few friends that seems to feel differently on a given topic.

But with the team photo frames, the resulting impact of the change is much smaller in scale, of course. It will likely only encourage some light banter among friends and rivals from opposing teams.

If anything, it’s more of an experiment on Facebook’s part to see which kinds of “causes” users will be most attracted to adopting – those where they feel they’re taking a stand, those where they’re just having fun, or both.