The online design platform Canva, which has made creating quality professional graphics something anyone can do, has raised $15 million in Series A funding, the company announced this morning. The round, which follows the release of Canva’s new platform for businesses, “Canva for Work,” was led by Felicis Ventures and values the startup at $165 million.

First launched in mid-2013, the idea for Canva came to founder and CEO Melanie Perkins, who had originally created a system that made the process of building layouts for school yearbooks easier. But she soon realized that a simple user interface for more complex design tasks could have broader appeal.

Not everyone has an eye for good design, or is comfortable using professional-level tools like InDesign or Photoshop, but often still needs to create graphics for things like slideshows, invitations, handouts, posters, Facebook, cards, collages, blog posts, and much more. That’s where Canva comes in.

The online service lets users choose from a variety of ready-made templates, graphics, fonts, and photos. Many of the items on its site are free to use, where others let you buy the rights for your one-time use for just a dollar – lower than traditional stock photo sites, in many cases. This fee helps generate revenue both for the designer and Canva.

What makes Canva so compelling is more than the sum of its parts, however – it’s the way all of it works together. The system the team has built is so simple that even the novice designer can fudge their way through and still produce a great-looking, professional graphic thanks to the simple toolset and product’s ease-of-use. 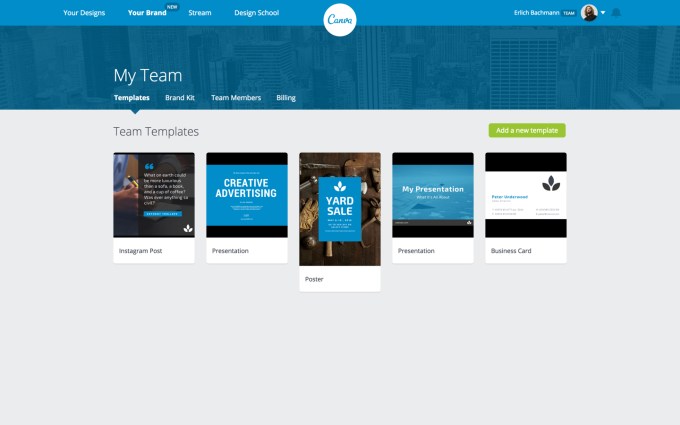 Notes Perkins, Canva’s install base has doubled in four months, and over 35,000 teams have upgraded to the new, paid version of the service in its first few weeks. That subscription-based offering is $9.95 per month, if on an annual plan.

To date, the company has grown to reach over 5 million users, including business, marketers and designers, and is live in 179 countries where more than a million designs are created weekly. For context, Canva had 2.3 million users as of this May, and was then seeing 3.2 million designs per month.

Canva’s user base includes 40 percent of Fortune 500 companies and organizations like HuffPo, Lonely Planet, Yelp, Upworthy, and Hubspot…oh and I hear TechCrunch, too, at times. The service is also used by non-profits, bloggers and the education sector.

And now, the company will is developing a program to target the non-profit industry in particular. The program will allow these organizations to take advantage Canva for Work for free, and is already being used by Amnesty, Stop Hunger Now, the Fistula Foundation, and Opera America. Each nonprofit can have a team of up to ten people helping to spread their story and raise donations.

“We now have five million users who have created 35 million designs,” says Perkins. “It’s pretty crazy that more than two designs are now created every second. In our last month alone, our five million users have created 5.7 million designs. In addition, our users have written 14,560 blog posts and created 19,500 YouTube videos about Canva,” she adds. 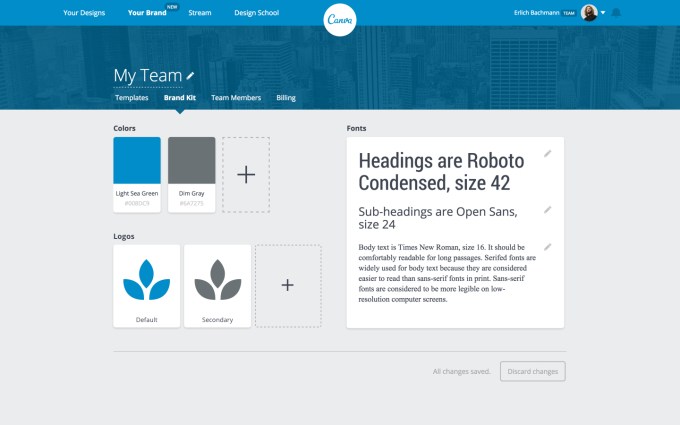 “When we first saw Canva, we knew that they would disrupt the graphics and photo design market,” said Felicis Ventures partner Wesley Chan. “The fact this is our largest ever check our fund has written demonstrates how much we believe in their vision.”

Canva also got some Hollywood action with actors Owen Wilson and Woody Harrelson investing in the company. Wilson also released a statement, saying: “Canva is on fire! This could be a game changer. 5 million users in just over two years, the numbers speak for themselves. Great investment and top-notch team.”

The Sydney-based startup says it will use the additional funds to continue to enhance the product and expand its global footprint.