Today at its BoxWorks event, Box CEO and co-founder Aaron Levie sat down with Apple CEO Tim Cook to discuss enterprise technology and collaboration. Although he leads a company that has been in heavy competition with Google and its Android OS for years now, Cook was surprisingly positive on Apple’s relationship with one of its former nemeses, Microsoft — especially when it comes to selling to business users.

“Apple and Microsoft can partner on more things than we can compete on, and that is what the customer wants…Office on the Mac is a force,” Cook told the audience. “Partnering with Microsoft is great for our customers and that’s why we do it.”

Cook’s comments underscore how much Apple has changed over the years that he has been leading it, and also how the company is playing by a different rulebook when it comes to enterprise.

“I’m not a believer in holding grudges… life is short and you’ve got to have as many friends as you can have,” he continued. “I think we will deliver much better solutions working with major players and that’s what the customer wants.” That last comment prompted Levie to summon the audience to clap: “An applause for openness!” he exclaimed.

More generally, Cook emphasized Apple’s approach to enterprise services being more about creating products that work for both and then developing services that focus on the end user more specifically. When you want to buy a smartphone, he said, “You don’t buy an enterprise smartphone.” Levie polled the audience, and by a landslide, attendees at the enterprise event were iOS users (perhaps because the Android devotees are busy doing something else this morning).

Apple is best known as a consumer company, releasing products like the iPhone and iPad that changed the face of everyday technology. In spite of that, Cook said that Apple has, for a few years now, been building “enterprise features” in its software. Apple was quiet about the move, according to Cook. 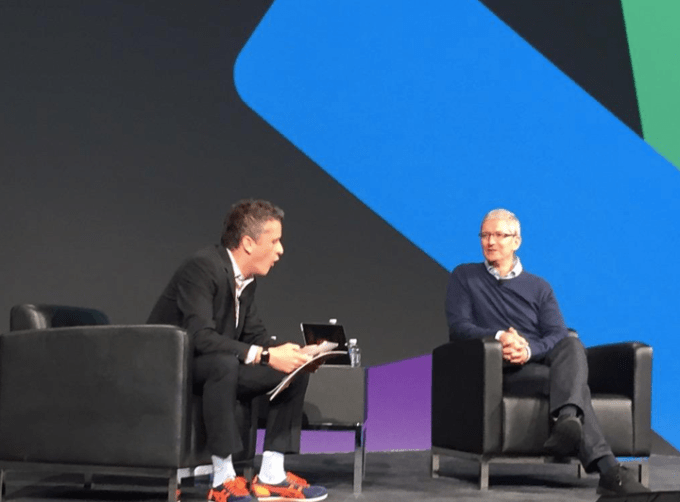 On the heels of a record sales period for the new generation of iPhone, mobility was a key point in the discussion. According to the Apple executive, “the best companies will be the most mobile.” The view, given Apple’s focus on building mobile computing products, isn’t surprising.

Levie pushed Cook on Android and why iOS is perhaps a better platform for enterprise use. Cook paused, and then deadpanned “you want to pick the best product.”

However, despite some predictable mobile swagger, Cook was honest about Apple not being good at everything. “We don’t have deep knowledge of all the verticals that the enterprise deals with,” adding that “to do great [in the enterprise, Apple] need[s] to partner with other people.”

Box has pursued a similar strategy itself, picking up IBM and others to help it approach parts of the enterprise where it has less skill, or leverage.

Cook didn’t just ding Google, however, during the roughly half-hour chat. In an extended riff on operating systems, the Apple CEO argued that having a single operating system for both mobile devices and personal computers is futile. The comment was a dig at the recently released Windows 10. According to Cook, trying to build one operating system for desktop, and mobile productivity, leads to a lesser experience on both.

The tone of the talk was light, but Cook stressed repeatedly that Apple is taking work in the enterprise as a serious goal; it was a soft pitch to the developers and companies in the room, but appeared to be effective.