A new startup, Rollout.io, launching today at TechCrunch Disrupt San Francisco 2015 wants to put mobile app developers back in control of their software by allowing them to make code-level changes on the fly. This service aims to address a common problem app developers today face. That is, when there are critical bugs or other issues that need to be fixed, the process of actually getting an updated app installed on end users’ devices can take hours or even days, if not longer.

That’s because of the way mobile applications are distributed – updated versions have to be submitted, then approved by app stores run by Apple and Google, before the new apps are made available.

While there are ways to expedite critical security fixes, for more minor problems, like crashes that only affect a subset of users, user interface glitches, or other changes a developer wants to make – like adding a new event to track via an analytics provider, for example – developers are still stick waiting out the app submission and approval cycle.

That’s where Rollout.io comes in. Co-founded by former Intel engineers, Erez Rosovsky and Eyal Keren, the company’s mission is to bridge the gap between developers and their live applications.

Rosovsky says they came up with the idea while working on a different startup at an accelerator in Israel, as they realized this was a universal problem affecting the industry today.

“When an application’s crashing, you get bad reviews, users are abandoning you, your App Store ranking starts to plummet, you might be losing sales if you sell something inside the app,” explains Rosovsky. “You’re getting all these emails about the problem, but there’s nothing you can do…you have to release a new version of the app,” he says.

The problem with the longer production-to-release cycle issue isn’t one that only affects developers when there are serious bugs, either. Sometimes, developers just want to make minor adjustments – like tweaking the user interface or the app’s flow, change the messaging users see, make an adjustment to something they’re tracking with Google Analytics or Mixpanel, or even just inform users that they’re aware of a particular problem and that a fix is in the works.

Rollout.io can help here, too. The company offers developers an SDK which allows them to actually change the running code. 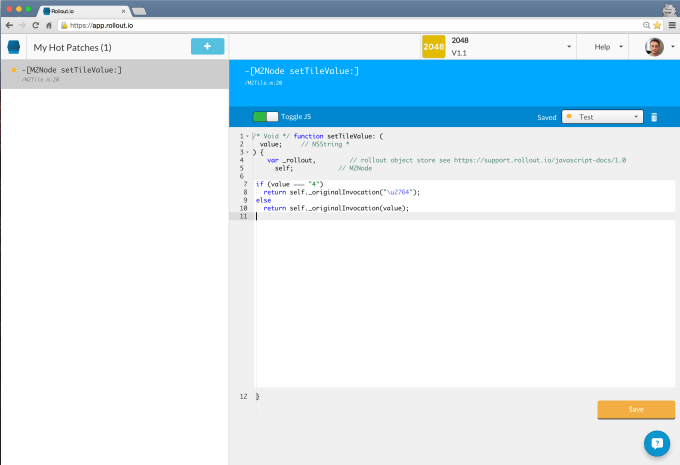 “We actually change the runtime of the application,” says Rosovsky. “You have method-level access [on iOS]…and let’s say you know a specific method causes a crash,” he explains. “You access that specific method, and in the SDK, we’ve already packaged pre-defined solutions that are generic enough to solve many problems, but are specific enough to solve your problem,” Rosovsky says. Developers can then apply the solutions to any function they want in their code.

In addition to the pre-packaged solutions, Rollout.io also allows developers to inject JavaScript code in order to get method-level access and fix more complex problems.

All of these actions are handled via an online dashboard, which also allows developers to message users in real-time to head off bad App Store reviews. For example, a developer can add a message that’s sent to users the next time they open the app and trigger the problem. And in the cases where the issue cannot be fixed by way of Rollout.io itself, that message can inform users to head to the App Store to grab the update instead.

Founded in June 2014, the platform was opened into limited testing a few months ago and already has 1,700 developers registered and more than 100 apps in a production environment today, including several notable names, like GrabTaxi (an Uber competitor in Asia), Ask.fm, Max Levchin’s pregnancy tracker Glow, Musical.ly, and others.

Currently, testers are using the service for free, but the company will introduce a SaaS-based monthly subscription model in time where fees will be based on volume. A future version of the software will focus on even richer debugging capabilities, the ability for developers to change the user interface itself, and support for turning on and off other third-party SDKs. An Android version of the SDK will also be introduced next year, to complement the iOS version available today.