2015 has been a good year to be a cord cutter. There are more ways than ever to watch television and movies over-the-top without a subscription to a cable or satellite TV service. And now, some of the premium cable TV channels you used to have to watch via your set-top box are available via online and mobile streaming, as well.

Earlier this year, we took a look at HBO’s newer option for cord cutters with the launch of HBO NOW, and this summer, competitor Showtime followed suit with a streaming service of its own. But with Showtime, there’s a twist: you don’t have to use the Showtime app to watch – you can actually tack on a Showtime subscription to your Hulu or PlayStation Vue account.

Arguably, this makes Showtime’s service more compelling, as it means you don’t have to keep up with another app, account and service, but rather are able to switch over to Showtime – almost like you’re changing channels – while on an app you already use.

That being said, there are some differences between the two options – Showtime’s standalone offering and its integrations via Hulu or Vue.

Which is the best one for you? Read on to find out. 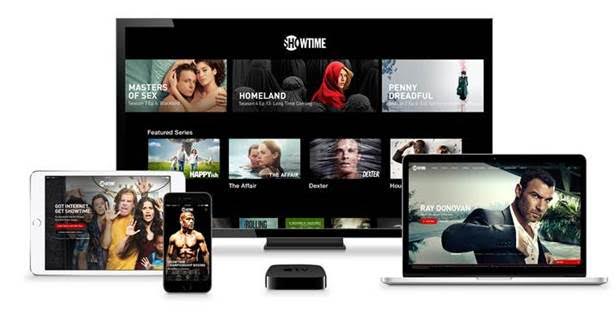 Showtime followed in HBO’s footsteps this summer with the announcement of its $10.99 per month streaming service, which just uses the Showtime name instead of introducing a new brand, as HBO did with “HBO NOW.” However, like HBO NOW, the CBS-owned premium cable network was initially available to only Apple customers using iPhone, iPod touch, iPad or Apple TV devices.

Today, the network’s app is also available by way of a Roku channel, and the company says that more providers are coming soon.

Included in the service is access to Showtime’s original shows, as well as movies, documentaries, sports programming, and more. Showtime does have a good handful of popular titles, though nothing on the scale of HBO’s “Game of Thrones,” which is the most-pirated TV show of all time and continues to increase viewership each season with the most recent finale pulling in some 8.11 viewers, to give you an idea.

Still, you’ve likely heard of many Showtime series such as “Ray Donovan,” “Masters of Sex,” Nurse Jackie,” “Dexter,” “Weeds,” “Shameless,” “House of Lies,” “United States of Tara,” “Penny Dreadful,” “Queer as Folk,” or “Episodes,” for example. And Showtime will soon be home to the reboot of the cult classic and prior Golden Globe winner “Twin Peaks.”

In addition, the channel offers a rotating selection of movies and sports programming, like “Inside the NFL,” “60 Minutes Sports,” and “Jim Rome on Showtime,” as well as boxing matches like the recent Mayweather vs. Berto fight, and more.

If Showtime was one of the channels you missed when you cut the cord – or one you were hesitant to do without – its new streaming service can help you fill in the gaps. But there are two options for you to consider with Showtime: the standalone service or the integrated add-on.

As noted above, Showtime’s own application is currently limited to Apple devices and Roku, though that may change in time. Its iOS app also supports casting via Chromecast, as another option.

But what you get for your $10.99 monthly subscription in the network’s own app is a little different from what you’ll have when it’s integrated elsewhere. 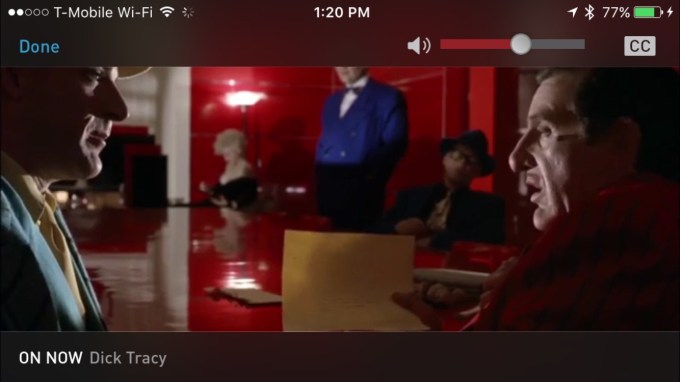 For starters, the native app offers a way to browse the content by category or search by title or actor. (The latter is a nice touch, as HBO NOW is limited to title searches.) Plus, you can maintain your own “Watchlist” of shows or movies you want to watch within the Showtime app as well as keep track of those you’ve recently viewed.

You can also configure parental controls of a sort within the Showtime app, by restricting viewing by rating (e.g. TV-Y, TV-G, TV-14, etc. for television shows, or G, PG, R, etc., for movies.) Unfortunately, these settings won’t be very effective as there’s no option to establish separate profiles under your Showtime account.

While obviously not a channel aimed at kids (especially with its racier “after hours” / soft core fare), it does have a selection of movies or shows that would be appropriate for a tween/teen audience, at times. Currently, for example, there are movies like “Disney’s Huck Finn,” “Adventures in Babysitting,” “King Kong,” and “Adventures of the Penguin King,” available for viewing.

But without support for profiles, there’s no way I’d give a kid unrestricted access to this channel…ever.

However, the standout feature in Showtime’s own app – and a big differentiator from HBO NOW, are its live feeds. In HBO NOW, new episodes of its original programs and its movies become available in its app at the same time as they premiere on HBO, while other live programs may be on a slight delay. 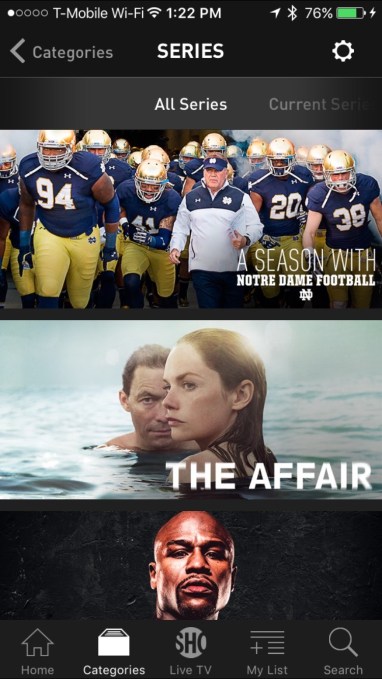 Showtime, on the other hand, offers a button for “Live TV” which lets you see what’s current airing on both its East Coast and West Coast feeds. You can then tap the “Watch Now” button to join in the program, already in progress. This means Showtime can operate more like a real TV channel, in addition to being an on-demand streaming service.

Whether that’s the direction streaming is heading, however, is quite another matter. Viewers don’t seem to be all that interested in tuning into “live” television on their connected devices, preferring instead to search, browse and be recommended titles that they often consume in back-to-back “binge watching” sessions.

But this is the bet that Showtime parent CBS has made, including with its own over-the-top application, “CBS All Access,” which offers live TV feeds from CBS-owned stations and a majority of its affiliates across the U.S.

Another option for accessing Showtime’s streaming service is by adding it on to a current video subscription, like PlayStation’s Vue or Hulu.

If you’re already a Vue subscriber, you can tack on Showtime, which then allows you to access the entire library, including series, sports, and movies as well as live stream the Showtime channel. This is available to Vue subscribers nationwide who have a PlayStation 3 or PlayStation 4.

Vue, in case you’re unfamiliar, is the PlayStation’s own service for cord cutters, which offers plans with 50+ channels in select markets including NY, LA, Miami, Chicago, Dallas, Philadelphia, and San Francisco’s Bay Area. A competitor to similar TV services like Sling TV, Vue bundles a lot of cable TV channels into various packages.

However, even if you’re outside one of the supported cities, you can still order Showtime through Vue for its usual price of $10.99 per month, or a discounted $8.99 per month if you’re a PlayStation Plus member.

You can then watch Showtime via your console or through the PS Vue iPad app.

The Best Option: Showtime Via Hulu

A better option, especially when considering the cost of Vue – which is in the same ballpark as traditional cable TV – is the Showtime Hulu integration.

Hulu subscribers can today choose between Hulu’s $7.99 per month ad-supported service or its new $11.99 per month commercial-free option. Then, on top of that, you can choose to “add on” Showtime. In fact, it’s the first premium channel to be offered via Hulu, though the company said it’s considering similar integrations in the future. 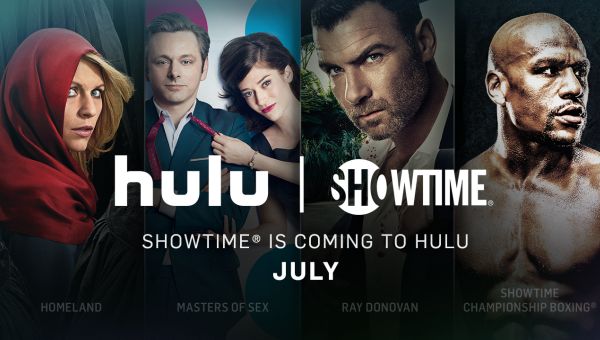 In addition, to make the deal even sweeter (and to boost Hulu subscribers), Hulu is subsidizing the cost of Showtime by offering it at a reduced price of $8.99 per month. (For what it’s worth, this is the option I chose.)

One thing to note is that, even if you’re not paying for Hulu’s commercial-free plan, Showtime’s Hulu channel is commercial-free. However, you may be shown “ads” for other Showtime content while watching Showtime on Hulu, similar to what HBO NOW also does.

The benefit to watching Showtime via Hulu, besides the lower cost, is Hulu’s support for viewing on different devices. While Showtime’s own app is limited to Apple devices and Roku, Hulu is available on a wide number of platforms, including iOS and Android devices, Apple TV, Xbox One, Wii and Wii U, Roku players and TVs, PS3 and PS4, Amazon Fire TV and Fire TV Stick, Chromecast and various TVs and Blu-ray players.

It’s worth mentioning, too, that if you aren’t already a cord cutter, but instead actually pay for Showtime through your pay TV provider, you can’t “authenticate” with your cable TV credentials on Hulu in order watch Showtime via Hulu’s service (and therefore, on more devices.) 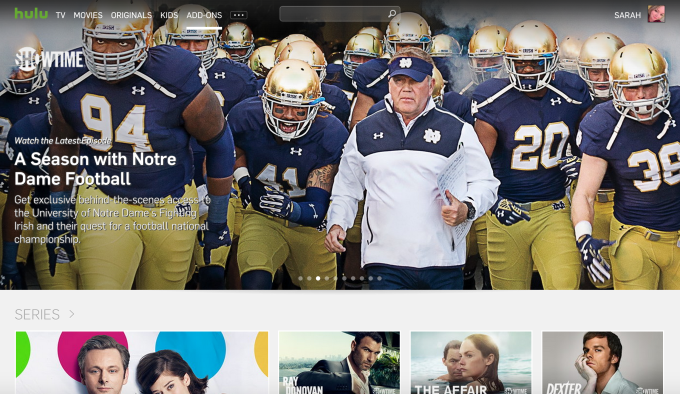 You may think that by opting for Showtime via Hulu you’re missing out on the live streams that are included with the app. I thought this for a long time, too, despite the fact that Hulu had announced earlier that its users would also be able to watch the live East and West coast feeds!

The problem is that the feeds themselves are buried on Hulu’s site – they’re not linked to from Hulu’s Showtime page. I only located them by digging around the help docs, in fact.

That being said, the live feeds on Hulu were terrible when I tried them. The video was glitchy and downright unwatchable even on a high-speed FiOS connection.

That’s not to say the feeds offered high-quality video on Showtime.com either, but they didn’t stutter as much there, I found. It’s hard to say if I just hit them up on a bad day on Hulu, or if they’re always this bad. (Perhaps that’s why Hulu doesn’t go to great pains to direct users to them?) 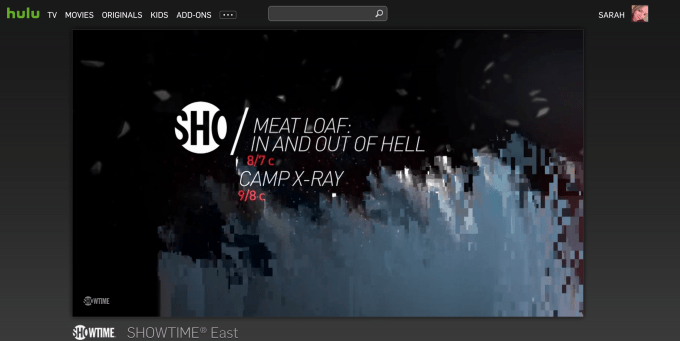 If watching Showtime live is important to you, then be aware that as a Showtime subscriber via Hulu, you can only watch the live feeds via your computer browser. At this time, Showtime’s streams are not available via Hulu mobile or living rooms devices.

Finally, for households with kids, adding Showtime via Hulu is the safer option. That is, assuming you log out of your Hulu account when not in use. Though Hulu still lacks decent parental controls compared with its competitor Netflix, you can block mature content – including Showtime’s – just by signing out of your account.

In other words, if you just want to set up your Hulu and/or Showtime to be age-appropriate for your family, including your kids, you can go through this process to “set-it-and-forget-it.”

Given this family-friendly feature, the reduced pricing, and the ability to watch across multiple devices and platforms, Showtime via Hulu is the best option today.

The only reason to go the standalone route is if A) you don’t care for Hulu and don’t want to subscribe or B) you’ve just got to have live Showtime feeds on your mobile device. (Which I doubt!)

More info on Showtime over-the-top is available here, via the network’s website.

Email me your cord cutting stories, or your Netflix recommendations: sarahp@beta.techcrunch.com