One of the better features in this week’s newly released version of Apple’s mobile operating system, iOS 9, is the ability for users to block ads on mobile websites, along with other content that can slow down browsing and eat away at mobile data plans. And while somewhat of a geekier feature to implement – users have to download apps then head into iOS’ “Settings” to enable their blocker of choice – it seems that new iOS 9 users are thrilled to have access to this added functionality. Only a day after the release of the updated software, ad blockers are topping the charts in the App Store.

Granted, none of the free ad-blocking utilities – like AdBlock Plus’s new ad-blocking mobile browser, for example, or the combination privacy-tracking app and ad blocker Ghostery – have been able to yet unseat any of the App Store’s top free apps like Snapchat, Messenger, Facebook, Instagram, YouTube, or – sigh, Kylie Jenner’s new thing.

However, several of the ad-blocking apps are climbing the charts elsewhere on the App Store, including in the top Paid app lists and in the Utilities section.

For example, the Top Paid iOS app today is the new ad-blocker Peace, a $2.99 download from Instapaper founder Marco Arment. As he explained when announcing the app on Wednesday, Peace currently supports a number of exclusive features that aren’t found in other blockers yet. Most notably, it uses Ghostery’s more robust blocklist, which Arment licensed from the larger company by offering them a percentage of the app’s revenue.

Other ad blockers are also topping the paid app chart as of today, including the Purify Blocker (#3), Crystal (#6), Blockr (#12). (Ranks as of the time of writing.)

And in the top Utilities section of the App Store, these types of apps are found even higher up, with Peace, Crystal and Blockr filling out the top 3 positions in the top paid utilities chart. 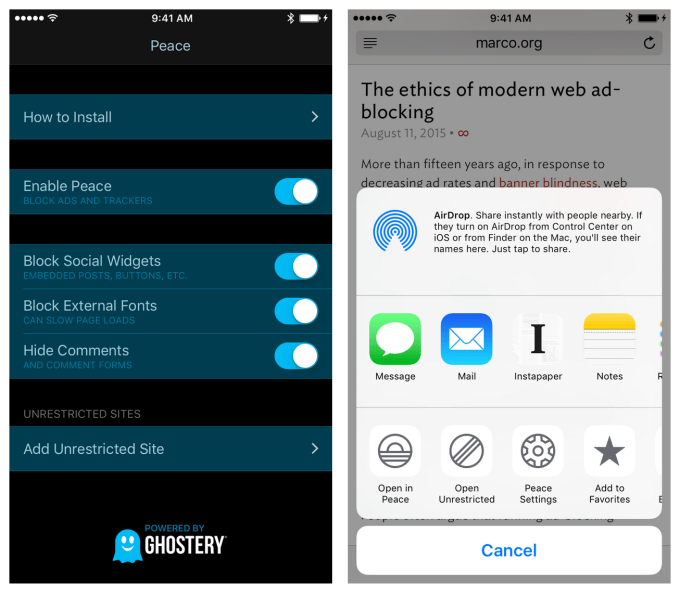 Although there are currently only a handful of blockers gaining enough downloads to become highly ranked, there are tons of these sorts of apps in development. We looked at a few of these (1Blocker, Blockr, Crystal) just ahead of iOS 9’s launch, and since then have heard from other ad blocker makers like Silentium (arrives soon), Adblock Fast, Purify, and Clearly, to name a few.

And there are many more still poised to arrive or launching now, like Adamant, Freedom, Hide and Seek, and Just Content.

It appears that the question for mobile consumers today isn’t really one of whether or not they want a blocker installed, but rather which one to choose?

At a high level, the blockers are fairly interchangeable – all will block ads and, typically, other content like tracking scripts when you surf with mobile Safari. However, some allow you to customize the blocking experience further – like by turning off or on particular types of content to block (social share widgets, videos, ads, fonts, comments, etc.). Others like you whitelist select sites or specify that you only want to block third-party cookies, as well as tweak other details.

The decision, then, is how much do you want to fiddle with your blocking settings? For those looking to just “set-it-and-forget it,” simpler utilities like Crystal or the newly launched Peace make more sense. For those who want to personalize their experience, many others offer a range of settings from simple toggle switches in the app to online dashboards where you can create complex rule statements. 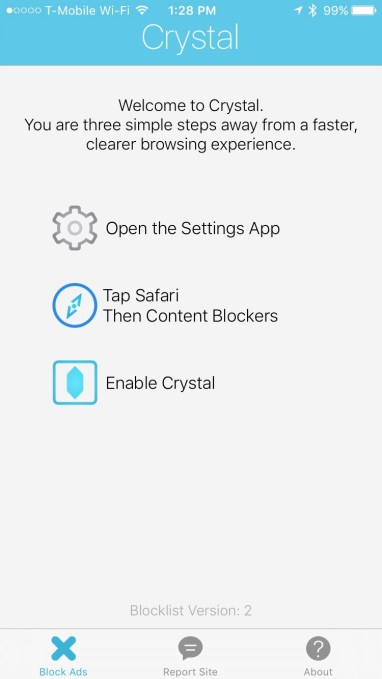 With the arrival of these apps, publishers and advertisers are fretting about the immediate impact to their bottom lines and business, which means they’ll likely soon try to find ways to sneak around the blockers. In that case, it should be interesting to see which of the apps will be able to maintain their high degree of ad blocking over time.

The best thing about the release of these apps is that it proves the App Store isn’t always the land of Idiocracy, like it sometimes seems. It’s good to see that a significant number of mobile consumers understand the benefit of these new utilities, despite their somewhat geeky nature and means of installation that involves fussing around with iOS’s settings. That’s a testament to how broken the mobile web has been to date, and how hungry people have been for a better browsing experience.