Amazon announced this morning that it’s making restaurant delivery an option via its one-hour delivery app Prime Now. The news confirms earlier reports which indicated Amazon was staffing up a new restaurants division to compete with services like GrubHub with hires in both Seattle and New York. However, the new food delivery service is initially debuting in select Seattle ZIP codes, with plans to expand to additional neighborhoods, then later, to new markets where Prime Now operates.

The service will allow Amazon Prime members to view the menus from participating restaurants, and place orders in the app. Similar to the order-tracking available today in Prime Now, customers will also be able to track their food delivery order in real-time as it’s prepped by the restaurant then as the driver hits the road, heading their way. 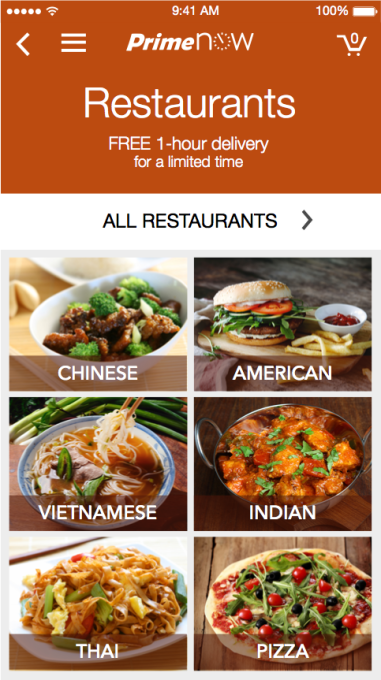 Amazon says that customers will see their food delivered within an hour or less with no additional charges or delivery fees.

That’s slightly different from how Prime Now works today, which involves free two-hour deliveries but a $7.99 fee for one-hour deliveries. In fact, the company notes that the food delivery service’s lack of fees in general, as well as the fact that it’s not marking up the prices for restaurant menu items, will be a competitive advantage.

The company also says that, for its restaurant partners, the service will allow them to tap into Amazon’s “best” customers – that is, those who pay $99 per year for Amazon Prime and who maintain payment information in Amazon’s Wallet. 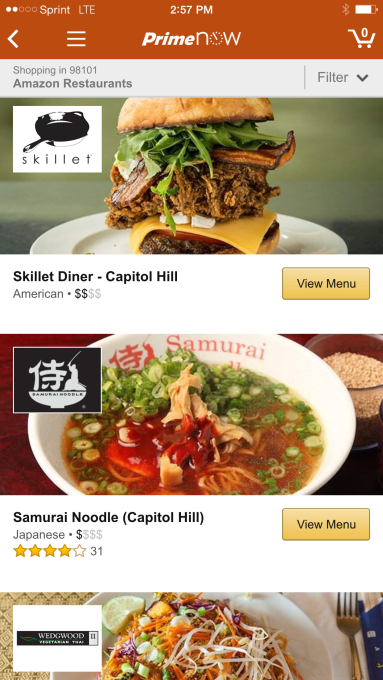 At launch, Prime Now is working with dozens of local restaurants on a rev-share basis, including Cactus, Wild Ginger, Skillet, Marination Station, Re:public, Café Yumm, Ten Mercer, Mamnoon and many more. But while there are no larger chains working with the company today, Amazon says that’s still an option. However, the company did indicate that it has a “high bar” for which restaurants it’s choosing to offer through its Prime Now service, which hints that it may be trying to compete on restaurant quality over breadth.

The announcement follows recent sightings of online job listings on LinkedIn and Amazon’s own jobs site which noted that the company was seeking employees for a dedicated division called Amazon Restaurants in Seattle and New York. In addition, TechCrunch previously reported the company was testing a GrubHub competitor last year, and it popped up within Amazon Local in December.

While Amazon hasn’t yet announced plans to launch the service in New York, it does seem like an obvious next market to target – especially because the company already has Amazon Restaurants employees in that location.

The Amazon Restaurants division, which grew out of Amazon Local starting back in May, also includes staff from that operation. Amazon declined to give a total head count, however. But the company today works with delivery service providers for Prime Now, though it doesn’t specify which services. 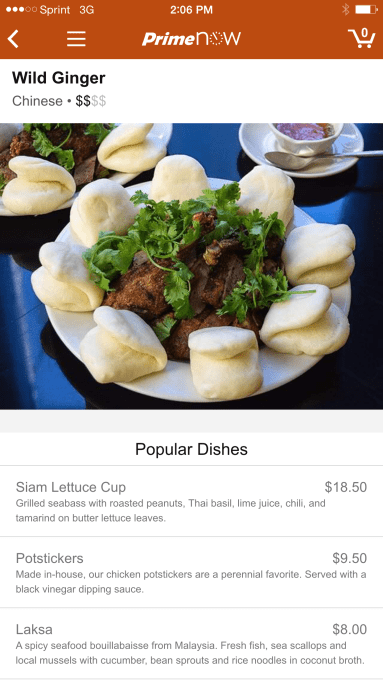 “Amazon Local did a lot of great work with restaurants, and this kind of came out of that – learning and growing from there, and seeing a great opportunity to partner with Prime Now,” explains Gus Lopez, a 17-year Amazon vet, and GM for Amazon Restaurants, on how the food delivery service got its start.

“We learned from working with local restaurants, and one of the big things that’s needed – and that we feel like we can do well – is a delivery service.”

That origin story for Amazon’s food delivery service sounds a lot like Groupon’s To Go service, which launched in Chicago starting in July. And along with Groupon, Prime Now will also compete with other food delivery services like Seamless/GrubHub, UberEats, food delivery offered by Postmates, as well as a variety of tech startups and traditional delivery services in the major metro areas which offer Prime Now. That list today includes Atlanta, Austin, Baltimore, Chicago, Dallas, Indianapolis, Manhattan, Miami, Portland and Seattle, in the U.S.