Yesterday on Facebook, a man named Matt Neal sent out a plea. He’s 26, his blood type is B+ and he has a failing kidney. His ask? “One working kidney from a true sneaker head.” His offer? A pair of some of the hottest sneakers on the planet at the moment, Yeezy 350 Boosts.

The pair of sneakers is made by Adidas, and designed in collaboration with Kanye West. Though the Boost lineup goes beyond the Yeezys, the grey and black 350s and suede 720s — along with new colors just released and others only glimpsed by mere mortals — are some of the biggest obsessions of sneakerheads. These collectors, traders and enthusiasts make up an enormous subculture-become-culture that obsesses over the latest shoe releases from brands and collaborators like Jordan, Nike, Reebok, Asics, Packer, BAIT, Kobe, Kith and more.

To call these collectors obsessed or driven is selling them short. There are multi-day sneaker conventions where people do nothing but trade and scope out what other people are wearing. A recent documentary outlines the tenets and beginnings of the movement.

Given that many of the dopest sneakers get released as a part of a limited run, it’s not uncommon for enthusiasts to jam up online ordering systems and line up the night before to camp out for the hottest cops. There are even tutorials on how to use page monitors and bots to score rare shoes. This furor, of course, leads to an insane secondary market, with shoes doubling, or tripling in price on eBay and other sales centers like Instagram and third-party marketplaces like Flight Club, Kixify and more.

Which naturally leads to fraud.

“The genesis of it was that I got screwed by eBay,” says Daishin Sugano, of the shoe marketplace app GOAT*. He was after the first pair of Jordans** that he had owned as a kid (this is a sort of rite of passage that most sneakerheads go through, sometimes it’s even their gateway to mainlining new releases). He then described his sinking feeling as he noticed details that weren’t quite right. After research, they became clear; the laces were rolled, not flat; the tongue was oddly shaped; they were counterfeit. And the return process was so convoluted that he never ended up getting his money back.

And it’s not even always that easy. Sometimes counterfeits are even made using the same materials that the real ones are, but there are always tells. And it’s only possible to tell in advance without a lot of back and forth. That kind of communication is hard on eBay and impossible on popular used sneaker venues like Instagram and Facebook. Poor return policies — or none at all — complete the picture.

Buying used collector-level sneakers, which can run from a couple hundred bucks to $8,000 easy, is fraught with danger. This, says Sugano, is what they wanted to fix with GOAT. To make things safer for sneakerheads.

GOAT is a sneaker marketplace that connects buyers and sellers. It’s from the same team that built GrubWithUs and Superb, both of which have been wound down. They’re still hunting for the right thing and working off of their original round of funding. GOAT comes out of a personal passion, which is always a good sign. 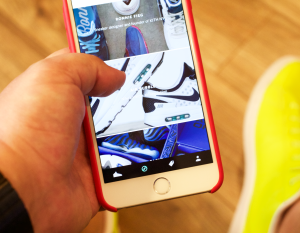 There are plenty of used sneaker outlets out there, so GOAT is trying to differentiate itself in a couple of ways.

Second, they protect buyers and sellers. Both of the above options have seller protection of a sort, eBay in its return policies and ratings, and Flight Club in its team of experts who have theoretically verified the provenance of your sneakers. But Flight Clubs prices are high, and the other options like Craigslist, Facebook and Instagram (where a ton of sneaker selling happens), offer none. GOAT, by comparison, will automatically protect any sale over $300 by verifying every sneaker sold. When someone buys an expensive pair, they are shipped to GOAT to be verified before being shipped to the buyer. The sale is canceled if they’re not legit and there are buyer protections even after verification, with returns accepted by GOAT.

Third, they offer pricing intelligence for sellers, and a set template of images that must be supplied in specific angles for every shoe and size. This offers much more information than is typically available in a marketplace, both to help the seller price the shoe correctly and to let the buyer see all angles of their product in clear images.

Currently, GOAT has 25,000 sneakers in its database including a bunch of data points about the shoe and copious images. They continue to gather that data, obviously, as more sellers put their shoes on the marketplace. This opens up opportunities for them to mine that, plus search and purchase data, to apply intelligence to a consumer segment that runs mainly on luck and obsession. What’s hot? What does the pricing curve look like on a particular set of kicks? AKA, when is the right time to buy and sell? These are all bits of low hanging sole that Sugano says they’re interested in tackling.

For instance, there have been over 100,000 ‘wants’ in the app already — people marking shoes they’d like to buy. That allows them to ping sellers who have it in their ‘collection’ (also a great feature for people obsessed with collecting), to tell them it might be time to trade up.

I’m what you might consider a journeyman sneaker head. I’m sitting on around three dozen pairs. That is nothing when compared to people like rapper Fetty Wap, who says he buys a pair a day, and keeps a house for his clothes, with one whole room filled with Jordans. Most of us will never be on that level, but for sneakerheads with a holy grail pair (mine are the black Jordan Pinnacles) that they’ll always be hunting, GOAT could provide a reliable option.