Ankur Jain, the founder of Humin – an app that aims to organize your contacts better than your smartphone – is sitting across from me in a conference room in downtown San Francisco and knocking on his own smartphone.

Two strong thumps to the glass screen and a comic book styled app called Knock Knock opens up and begins to search for other users around us.

Knock Knock is something Jain has been working on as a side project to his main startup Humin. His first app is meant to intrinsically understand the way you use contacts in your phone, whereas Knock Knock is based on connecting with and remembering those you meet at various events.

Jain plans to market this new app as a way for college kids to make connections without the awkwardness around immediately sharing contact info.

“New social encounters can be both awkward and intimidating,” Jain said. “Thinking back to my first week of college, I remember wishing there was a way to keep track and remember all of the new people I met. We created Knock Knock as a fun solution that takes the pressure off when navigating these situations, utilizing technology that mirrors our real-life social habits.”

Lots of apps have tried to do this before. About.me has an iOS app called Intro for quickly exchanging contact info, GroupMe took care of the conversational part of things by setting up group chats. LinkedIn has a contacts app called Connected.

Many of these types of apps also don’t make it. Spincard bit the dust last year. Bump, an app that let users bump each other’s phones to exchange photos and get contact info, is another that is no more. But Jain is optimistic about Knock Knock’s collegiate future. 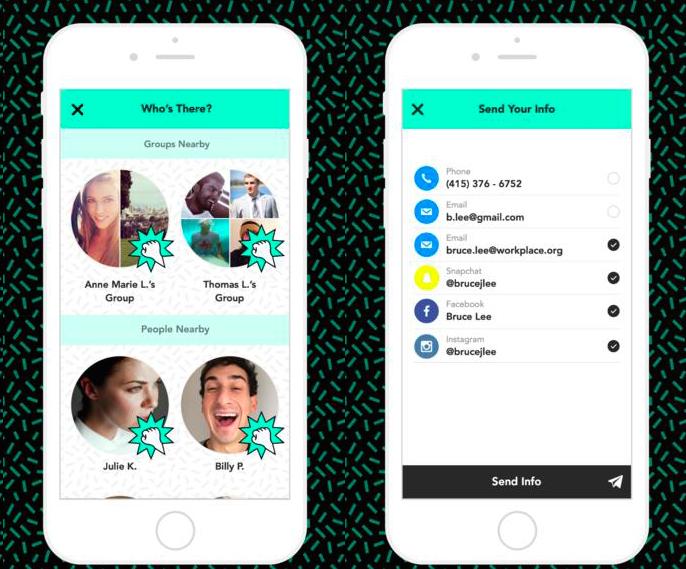 He has a reason to think positive. Jain is the son of tech billionaire and InfoSpace founder Naveen Jain. He watched his father run corporations from grade school up. He’s also pulled in some celeb-infused endorsements for Knock Knock. Sir Richard Branson, Will.i.am and Sophia Bush invested in Knock Knock and appear in an ad to show how the app works (head to the end of this article to see the video). All of that seems enough to at least give the app a shot.

It takes the awkwardness out of social interactions. You don’t have to give a fake number. Ankur Jain

Add to it that Jain is the founder of the Kairos Society – an organization that looks for and recruits some of the most talented and entrepreneurial minds under 25 – many of them hail from Ivy League schools. These students hold influential positions at their colleges and beyond and Jain is in a position to encourage these young and upwardly mobile folks to use the app.

He has another strategy to roll the app out on campus. Jain and his team selected certain colleges that tend to have intellectual influence on the world. These include Harvard, Cornell, the University of Pennsylvania, Stanford, Berkeley, and the University of Southern California. Knock Knock uses Beacon technology set up within certain fraternity and sorority houses at these schools so students attending a party at one of the houses or are looking to pledge can easily connect with those they met at the event and stay in touch later.

“The frat can then message that group with special invites for any upcoming parties or events and easily reach out to people for things like Rush,” Jain told TechCrunch.

That might seem obtrusive, but Jain affirmed that the students can unsubscribe to the messages and noted that invites and info through the app can help these organizations cut through the noise of email.

Students connect with each other on the Knock Knock network by knocking twice to open the app. The app then searches on a mesh network for those close to them also using the app. Users can then connect with one another and chat just using the app, or they can choose to share their email, cell phone, Snapchat and other social profiles with the rest of the group. If you don’t want to share your contact info but don’t want to look rude, you can just share partial information with certain people.

“They’ll never know you shared more with others in the group,” Jain said. “It takes the awkwardness out of social interactions. You don’t have to give a fake number.”

The app also helps users remember the names of those they met and where they met. This is a feature Jain worked into Humin but has a real application for event-based meetings meant for an app like Knock Knock.

The app also includes a group knocking function. Just one person has to open the app. Everyone else in the room can connect with that person/party by physically knocking on their closed and locked smartphone screen to be added to the group.

The one drawback to this is that the app uses Bluetooth to function, which could drain your battery. However, Jain contends the app is very low battery usage – especially when using Beacon technology. You don’t have to keep Bluetooth on to use the app, but it will activate Bluetooth on your phone when another user opens the app nearby and starts knocking. That could both drain the phone battery and be annoying if you don’t feel like answering their knock.

Will it make the connection where others have failed? Only time will tell. Overall it seems like a fun app with a clean design, and Jain has added all the bells, whistles — and knocks — to give it a good try.

Knock Knock is free to download and available on both iOS and Android, starting today.