There’s a new service called Whim for people who are tired of all the chatting in the current batch of dating apps.

To be sure, there are other online dating services that purport to focus on making real-world connections (rather than hosting awkward, back-and-forth messaging sessions that may or may not lead to actual dates or hookups) — that’s basically the reason HowAboutWe, which was acquired by IAC last year, exists.

But Whim is particularly absolutist in its approach to setting up actual dates. Users create profiles and specify the days when they’re free. Then they can browse other users and identify the ones they want to meet.

As soon as two people have expressed interest in each other, the service will go ahead and set up a time and place for the date, based on your availability and preferences (like whether or not you drink alcohol). You can still message one other about logistics (using your real phone numbers, by the way), but that’s no longer required before you set up a date. 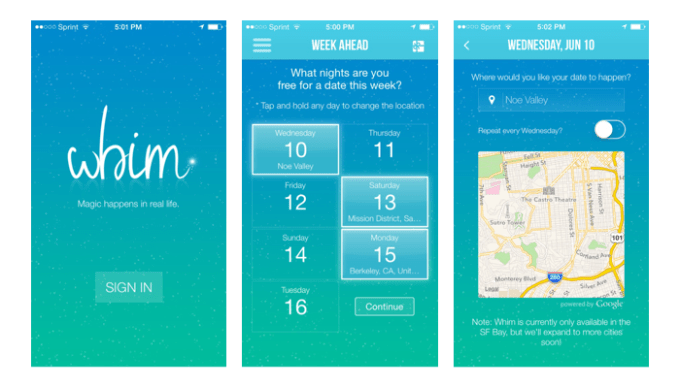 Of course, this approach sets the bar higher for that initial match, making users think harder before they swipe right. You can’t just say that you like everyone, start a dozen chats and pick the ones you’re willing to meet.

Peters argued that this turns swiping right into a “meaningful action” again, but she also acknowledged that it can also result in users who are just constantly turned down.

“Unfortunately, as is the case with any dating app and with real-life dating situation, some people are more successful than others,” Peters said. She added that Whim hopes to increase the likelihood of users going on dates as the user base grows and the app gets smarter about which users should get shown to whom. 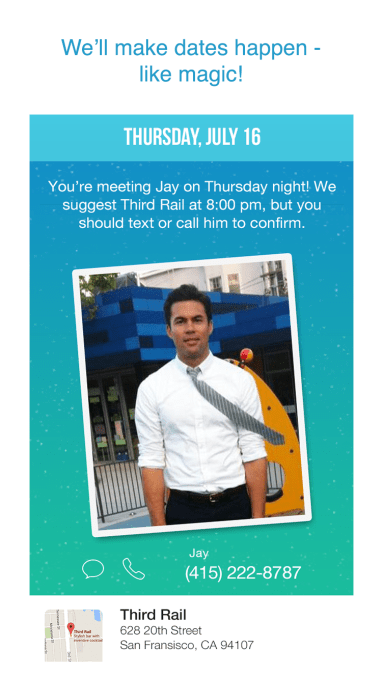 Another issue is safety. Awkward as it can be, I’d imagine that the message-before-meeting process does provide something of a filter for creeps.

On a basic level, it helps that Whim’s dates are all set up in public places. And Peters said the service relies on “high human touch” to do some of the same filtering. That starts with the profile creation process — every profile gets read by a Whim team member, who tries to catch “anything unsavory.” The team also reaches out for post-date feedback, so anyone who’s horrible or just a flake should get flagged and removed fairly quickly.

The service is currently free. Peters said she plans to charge $10 a month, with the first date remaining free and additional incentives for recommending the service to your friends. The app could also make money through promotional deals with the bars, restaurants and other businesses where it sets up dates.

Peters, by the way, has been in the online dating business for a while. She previously founded the group dating startup Mixtt, which launched at TechCrunch50, and worked at OkCupid Labs. So it’s no surprise that she read that Vanity Fair piece about online dating.

“The main points of it about the overabundance of choice and people’s reluctance to commit to one person, all of that resonated as very true,” she said. “From the perspective of being Whim’s founder, we think in a lot of ways, Whim can be antidote to what people are experiencing on Tinder … This is for people seriously looking to connect in real life.”

The service was incubated at 500 Startups and is currently available in the San Francisco Bay Area, with plans to launch in its next city (probably Los Angeles) by the end of the year. You can download the iOS app here. Peters said an Android version will probably launch in 2016.