Product Hunt, the online community where members upvote products, games and books they like, is helping that community get more of a heads up on “Ask Me Anything” (AMA) events today with the introduction of LIVE – a scheduled AMA with different product makers, founders, celebrities, authors and others.

The platform often invites makers of products to come to the site and answer questions AMA-style on the day of their product launch. Live streaming video startup founder Ben Rubin has participated, so has Mattermark’s Danielle Morrill and even rapper Snoop Dogg engaged with the audience in a Product Hunt AMA for the launch of his latest album.

However, the LIVE section will be something that is scheduled out and not necessarily around a product launch. “It’s to highlight makers and what they are doing,” Product Hunt founder Ryan Hoover told TechCrunch over the phone. 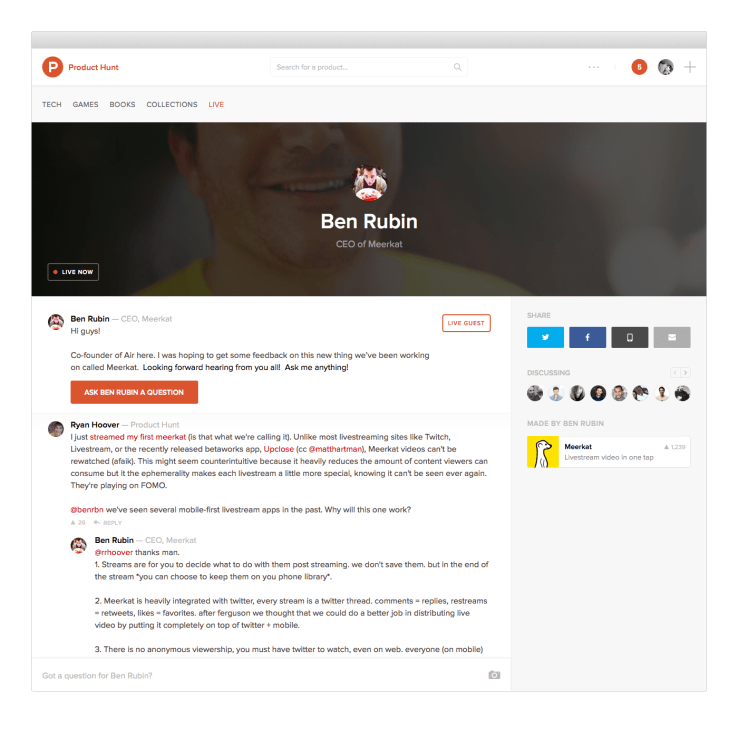 Makers will go on the LIVE section of the site from Monday through Friday (and on the weekend occasionally) to converse with the Product Hunt community and answer questions about their products, solicit feedback and tell their story.

The idea for LIVE hung there for a while, but Product Hunt’s Erik Torenberg convinced the team to push it forward, according to Hoover. “It’s something we talked about months ago. Eric brought it up because he kept seeing it mentioned with books and other things. We decided it was a good idea to have a section like this,” Hoover said.

Product Hunt has already scheduled more than 100 people for LIVE in the coming weeks. The list includes familiar tech leaders like Aileen Lee, Ben Horowitz, Jessica Livingston and Dave McClure, but also those with more of a celebrity cache such as Amanda Palmer, Ashton Kutcher and BJ Novak.

Adam Lisagor, founder of Sandwich Video, which makes a lot of the startup commercials for companies like Slack and Robinhood, will be on LIVE today as the first to go on. 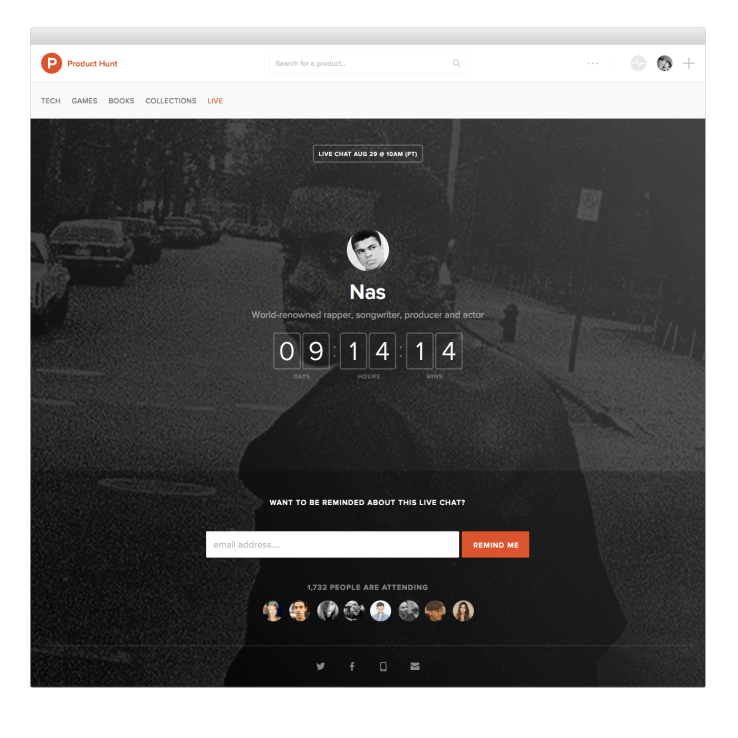 But the LIVE feature isn’t just for high-profile people, according to Hoover. It will be for gamers, book authors, and for “anyone building something cool,” Hoover said.

He hopes to see more interesting and serendipitous conversations come about on the site through LIVE – but especially between the tech community and those outside of tech. This is something Product Hunt is striving to do as it grows. The platform has already added games and books sections in an attempt to grow beyond its core startup audience.

Hoover mentioned mid-western car salesman Jesiah Bonney as someone he’d like to highlight in a LIVE discussion on the site. Bonney doesn’t have much to do with the tech scene, but he has a knack for making stop-motion videos and other entertaining bits on Hoover’s favorite social video platform Mindie.

“I would love to bring more attention to his talent,” Hoover told me. “Car sales are obviously not his passion. I told him, you’ve got to find a way to make what you love a part of your life.” 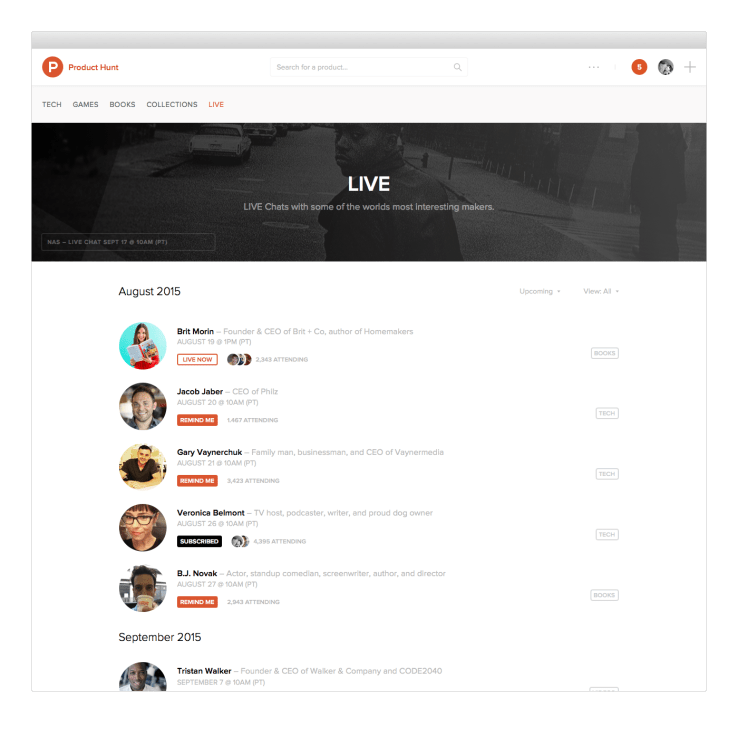 There are a lot of similarities between Reddit and Product Hunt – including upvoting and AMAs. Reddit’s more popular AMA’s also included Snoop Dogg. Hoover acknowledges the comparison but pointed out that the audiences are different on each platform.

“Even if the products were identical you’d get a different experience in each AMA because of the audience,” Hoover said.

Reddit has been criticized for indulging hate speech and trolling in threads over the years. However, the site billed as the “front page of the Internet” recently started to hide and/or ban some of the more unsavory topics on the site.

Product Hunt’s audience is generally positive. People ask questions about posted products they’ve upvoted or want to know more about. But the tech scene seems more positive to me than other sections in general (feel free to disagree). It will be interesting to see how the LIVE feature turns out as Product Hunt introduces more people beyond those in the startup world.