Google has made it a thing to name its Android OS versions after food. Letter by letter in the alphabet (har har). But not just any food — food that’s really bad for you. This version, which has been called “M” until now, had its name unveiled today….

The new “marshmallow” statue was unveiled today on Google’s campus in Mountain View.

Here’s the yummy history of Android names (minus the first two): 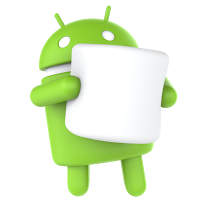 If you remember, KitKat got kind of weird when Google started doing cross promotion with the candy company. Maybe there could be a Ghostbusters tie-in this time?

The technical guts of the announcement, along with the name, were shared on Android’s Developer blog as well:

Whether you like them straight out of the bag, roasted to a golden brown exterior with a molten center, or in fluff form, who doesn’t like marshmallows? We definitely like them! Since the launch of the M Developer Preview at Google I/O in May, we’ve enjoyed all of your participation and feedback. Today with the final Developer Preview update, we’re introducing the official Android 6.0 SDK and opening Google Play for publishing your apps that target the new API level 23 in Android Marshmallow.

This means that the final version of “M” is in preview and almost ready to be rolled out to consumers. No timetable yet, though.

How was the statue made and how’d they get it into place with nobody seeing? Check this out:

In case you missed it, here is our walkthrough of Marshmallow: