College students may soon be taking autonomous shuttles between classes and wherever else they need to go on campus.

Y Combinator-backed Auro Robotics is currently testing their driverless shuttle system at several universities, and is actually beginning to deploy shuttles on the campus of Santa Clara University.

The company is also planning to expand to other markets like amusement parks, retirement communities and small islands, with some projects in those spaces already set to take off “in the later part of this year.”

Auro has chosen to focus on these small, contained environments largely because they are controlled by private corporations, and thus are not subject to the heavy government regulation that Google and other companies are stuck behind with their driverless cars. 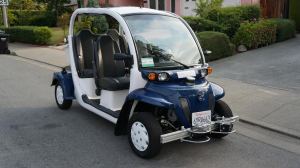 “The unique advantage this strategy gives us is that we are able to mobilize the shuttles now instead of waiting for the next five or ten years for laws to get through,” Auro Robotics CEO Nalin Gupta said.

Gupta told me that the main challenge in designing an autonomous vehicle for this sort of area is building one that can smartly and safely navigate heavy pedestrian traffic, something he said their team has been finessing for some time.

The team actually creates a three-dimensional map of the environments that they’re deploying the shuttles in, so that the vehicles can be as responsive and aware of their surroundings as possible.

With so many unique factors to account for, efficiency is really of the essence to the group as it hopes to break out and become one of the dominant players in the autonomous shuttle space. Gupta and his team are rapidly making improvements to the components of their vehicles to make them as intelligent as possible. The group has relied on several third-party technologies such as Polysync to reduce the time it takes to get their vehicles to market.

The company is currently working on two separate models of their shuttles, so that, depending on the needs of the area, the vehicles can either follow a closed-loop route with pre-defined stops or could be called on-demand to pick up a user and drop them off at a location that they define.

Driverless cars may be a ways off from hitting mainstream, but it seems the campus of the future is already on its way.