As Orson Welles put it in The Third Man, “In Italy, they had warfare, terror, murder, and bloodshed, but they produced Michelangelo, Leonardo da Vinci, and the Renaissance.”

In Israel, it is the ever-present fear of warfare, terror and bloodshed that has propelled Israelis to invest in creative and sophisticated technology solutions, from the Iron Dome anti-missile system to Super Heron reconnaissance drone. But as most readers know, Israeli high tech is much more of a general scientific and entrepreneurial renaissance than an extension of Israel’s military industrial complex.

One sector that uniquely straddles these two worlds is cyber security. It is perhaps the one sector where methods, tactics and experience of the Israel Defense Forces’ intelligence units can readily translate into commercial products for business customers.

With the backdrop of nation-state cyber warfare and the alarming rise in cybercrime perpetrated by individual hackers and criminal gangs, cyber security deserves the hype it receives from media and investors alike. While many CISOs and corporate executives are familiar with Israeli cyber talent owing to Check Point, Imperva, CyberArk and other notable security success stories, the sheer scope of Israeli startup activity in the cyber sector is staggering.

We have prepared the Israel CyberScape  a general resource for CISOs, corporate development executives and investors keen on exploring Israeli cyber security. It includes 150 startup companies divided into 10 market segments. While there is likely some overlap, and some dissent is expected, we feel confident that the CyberScape paints an accurate picture of the market today [excluding companies still in stealth mode]. 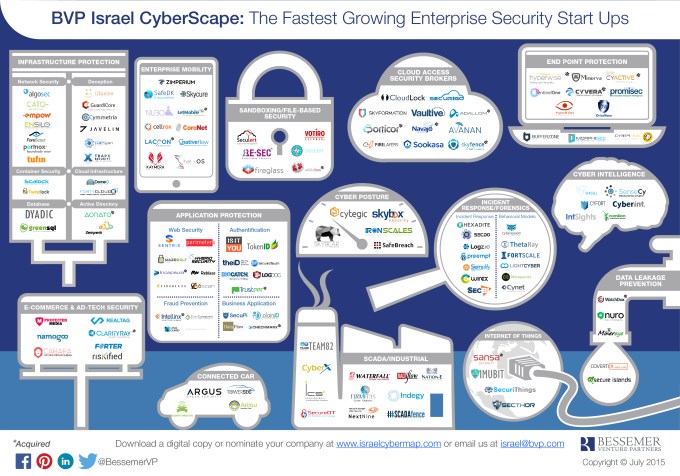 Aside from the strong market demand and the ample supply of talent from intelligence units, the current cadre of Israeli cyber security startups enjoys some unique tailwinds:

Foremost is the fact that Israeli corporates and government offices are themselves on the frontlines of cyber defense and thus prime customers to target. Israeli corporates are surprisingly reluctant to be early adopters of technology and even more so when it involves a local start-up. Different rules apply in cyber defense, where Israeli tech is at a premium. This provides Israeli start-ups with a ready set of strong beta customers that serve as strong references globally.

Furthermore, Israeli cyber startups are buoyed by the presence of Israeli and American multinational cyber companies, which serve as a badly needed source of business and product talent… skills that are not a high priority within military intelligence. Israel is home to cyber security R&D centers for many leading American companies, including RSA, IBM, Microsoft, Akamai, Intel McAffe, Palantir, Intuit, AVG, F5 Networks, Palo Alto Networks and PayPal. More recently groups such as Germany’s Frauhofer Institute and Lockheed Martin have announced intentions to set up large R&D centers in Israel.

Finally, Israeli cyber startups are high on the shopping list of numerous high tech multinationals keen on acquiring talent and filling a hole in their product portfolio. Over the past 24 months, there have been more than 15 acquisitions of Israeli cyber security companies totaling $2bn in value, and two successful IPOs by Varonis and CyberArk, the latter now valued at $2bn on NASDAQ. There will be many more acquisitions and IPOs, but there is also some risk.

As the number of Israeli cyber startups continues to climb there is a risk of market fatigue and confusion. CISOs at large banks and corporations have dedicated teams to testing new products, but the mass market will not be able to make sense of the many solutions out there. They are severely understaffed and prefer to stick with brands and concepts they are familiar with. Additionally, as cyber rapidly takes up a disproportionate share of venture funding there is a risk of a funding crunch for those companies looking for ever deeper pockets. Lastly, there is a very real risk of losing top development talent to the entrepreneurial bug which is more contagious in times of plenty.

While one can always find an Israeli startup or two riding the hottest and most recent tech trends, the case of cyber security is unusual. There is an abundance of Israeli cyber start-ups at the best time possible. Its fantastic news for customers, but only time will tell whether this is good news for entrepreneurs, investors or just for acquirers.