A new update to the Google Maps iOS application promises to make it easier to navigate when it’s dark outside, potentially reducing the risk associated with using the app while behind the wheel. (Not that you should be actively using the app while driving, but…admit it, you’re probably guilty of this.) In the latest release, the app has introduced a feature called “Night Mode,” which opts for a darker display over the glaring white one that’s the default look for Google Maps.

The idea is that this could improve your night vision, as your eyes will no longer have to adjust as you switch between the bright display and the dark road ahead.

Sure, it’s a minor feature release, but one that could make Google Maps a safer navigational aid for the millions of drivers who rely on the app instead of an in-dash navigational system. 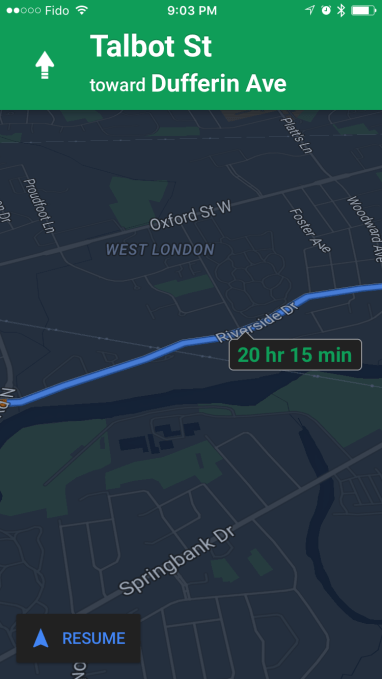 Night Mode is live now on the iOS version of Google Maps, but is already live in the Android version.

The update also included a handful of other interesting features, such as the ability to label places to see them on your map and in search suggestions, which offers a more personalized experience, and the ability to edit the captions of photos you’ve uploaded to Google Maps.

But clearly, the standout feature – and one iOS users have been asking about for years – is Night Mode.

The feature is also entirely automatic, so you won’t have to fiddle with your phone’s settings in order to switch it off and on. Instead, Night Mode will only activate when it’s actually nighttime – not simply when it’s dark. (Yes, we confirmed this by testing in a darkened room).

It’s also only available in turn-by-turn navigation mode, not the default maps interface. In other words, the enhancement will appear right when you need it, and there’s nothing else you need to do…well, except update to the latest version of Google Maps, that is.

Correction: Night Mode has been available on Android. The article has been updated to reflect.