Microsoft announced this morning the general availability of its “digital storytelling” app called Sway, the latest addition to the Microsoft Office suite. The app, which was first introduced 10 months ago, allows users to create, share and collaborate on interactive presentations that combine text, images, videos and other media. The app is rolling out now to all Office 365 for business and education customers worldwide, as well as to consumers who can use it with a free Microsoft account via Sway.com.

A Windows 10 version is also being made available, says Microsoft, and Sway has been updated with a new layout and publishing capabilities.

With Sway, Microsoft is attempting to create an Office app that makes sense in the digital and mobile age. As a web application, Sway lets users pull in both local data along with content from online services like Bing, OneDrive, YouTube, Facebook, Twitter, SoundCloud, Vine, Vimeo, Flickr, Giphy and more. It lets you update the layout and move around the content to tell a story, and it will automatically reformat your Sway for viewing on smaller-screened devices, like phones and tablets.

Unlike Microsoft’s other Office apps, Sway is flexible in terms of the kinds of final products it produces. The app can be used as an alternative to PowerPoint, for example, as well as for things like reports, newsletters or even just personal presentations.

It could also help boost the subscribers for Office as a cloud service if it became something people depended upon. 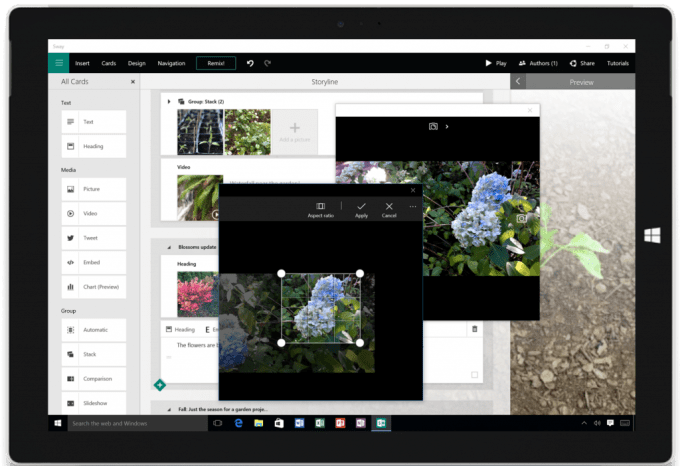 The company previously made Sway available to everyone in December, though at the time it was still considered a “Preview.” Microsoft said then it had seen 175,000 requests on its waiting list for the app. Today it notes that users have since built “hundreds of thousands” of Sways, as this new document format is called.

With the new Windows 10 app, Sway offers the same feature set that’s available on the web, including its built-in design engine, but will also take advantage of being a PC app by allowing users to present their Sways when offline. The app before was heavily dependent on an Internet connection to work, which caused problems when Internet access was poor or unavailable. To address user feedback on the matter, Microsoft says the Sways you’ve already loaded will be available offline. (However some elements, like interactive maps or online videos, will still require Internet access).

Sway for iPhone and iPad was also updated, and Sway for Windows Phones is also in the works, the company noted. An Android version is in the works, but there’s no ETA on it.

Along with the release, Microsoft also introduced a couple of new features for Sway. One is a new layout in the Navigation pane, which displays groupings of content like images, text, videos, tweets, etc., one screen at a time.

In addition, Microsoft is now allowing users to publish Sways to the newly relaunched document-sharing service Docs.com service, where they can be organized along with other Office content into collections. This makes it possible for users to more broadly share their Sways, too, as Docs.com files can be indexed by search engines and shared on social media.