Have you ever regretted sending an email, and wished you could take it back? Or maybe you’ve worried about sending confidential information over email – especially after seeing the damage a large-scale email hack can cause, like the one that hit Sony Pictures last year? A new “self-destructing” email service called Dmail aims to eliminate these concerns with the introduction of tool that allows you to better control the messages that are sent over Gmail.

With Dmail, you can revoke access to any email at any time, and, in a release arriving soon, you’ll be able to stop recipients from forwarding your message to others, too.

The idea for the new service comes from the team behind the social bookmarking service Delicious. A longtime web staple, Delicious was sold by its former owners, YouTube co-founders Chad Hurley and Steve Chen, to the tech investment and advisory firm Science, Inc., run by former MySpace President Mike Jones.

Along with Delicious, Science invests a number of growing startups, like FameBit and Hello Society, through its Science Media Group arm, and incubates and invests in others like DogVacay, HomeHero, Dollar Shave Club and more.

Of course, the ability to revoke an email has been around for some time – but those earlier implementations leave a lot to be desired. For example, Microsoft Outlook users at a company that uses Exchange Server can recall emails, but it doesn’t work with addresses outside the organization. Meanwhile, Gmail’s own “un-send” feature – which recently graduated from Gmail Labs – lets you cancel a sent email by configuring the number of seconds after hitting “Send” that you can click on an “Undo Send” link to bring your message back to drafts.

However, Gmail’s undo send option is limited to 30 seconds max. With Dmail, you can destroy a sent email at any time.

The product works by way of a Google Chrome web browser extension, which only you, as the email sender, have to install.

Once loaded, you’ll have a new option within the Gmail “compose” interface that allows you to turn the Dmail service off and on using a toggle switch. When on, you can specify ahead of sending an email if you want the email destroyed in an hour, a day, a week, or “never.” Even if you choose the “never” option, you can later go into your sent message and click a “Revoke Email” button to remove access to that email from all recipients.

What’s clever about Dmail is that, unlike some other secure messaging products, recipients don’t have to use the service themselves in order for it to work. If they don’t have the extension installed, they’ll instead receive an email that states: “This secure message was sent using Dmail. To view this message, simply click the button below.”

Clicking the included “View Message” button will then redirect them to a web view where they can read your email. 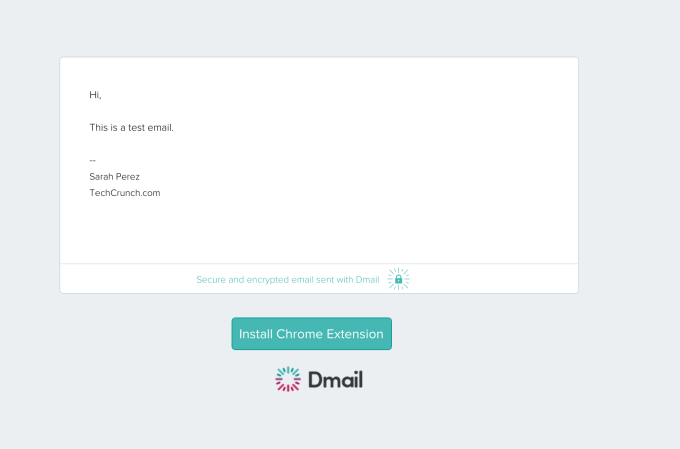 If, however, they do have the extension installed, they can read your message right within Gmail itself.

In addition, after a sender revokes an email, recipients with the extension installed will see a message that reads: “this message has been destroyed and is no longer available.” Those without the extension can still go into the email and click on the “View Message” button, but they’ll then see a similar “Message Unavailable” note on the resulting webview.

Dmails are encrypted using a standard 256-bit encryption algorithm, the company says. When a user sends a Dmail, the body of that email is encrypted locally on the user’s machine, explains Eric Kuhn, who lead product on Dmail. “An encrypted copy of that email is sent to a datastore controlled by Dmail. The recipient of the email is sent both the location of that datastore, as well as a key to view the decrypted message,” he says.

“Neither Gmail nor Dmail servers ever receive both the decryption key and encrypted message. Only the recipient and sender can read the email legibly,” Kuhn adds.

The product, which was built by a seven-person subset of Delicious’s team, has been in development for a good part of the year, and has been in private testing, first internally with Delicious and then with Delicious users, over the past few months.

While it currently only works with Gmail, the long-term goal is to expand access to other platforms, including Google Apps. In addition, a Dmail iOS application will launch in August, and will be followed by an Android release. These apps will allow users to both compose and read Dmails right from their smartphone.

Eventually, the team plans to make Dmail a freemium service, where some aspects will remain free for individuals while power users and businesses will pay for other features.

One possible feature that Delicious could charge for is the ability to expand the “self-destructing” functionality to documents.

“I love the idea of giving someone access to a PDF file or document and then be able to revoke viewing access,” says Jones. “In our business we see it all the time,” he says, referring to Science’s position as startup backer. “We might have a sensitive financial file or investor deck that we really just want to open once and then revoke the access, and there’s no simple way to do it.”

Document control is already in development, and Jones says he expects the feature to launch before this winter.

In the meantime, Gmail  and Chrome users can try Dmail for themselves from here.