Amazon Home Services, Amazon’s own Angie’s List competitor of sorts, which connects consumers with service professionals in their area, is expanding to more markets. According to a company announcement this morning, Amazon Home Services is today available in 15 metro regions across the U.S. The site also now features over 15 million service listings, which cover 900 different types of pro services. 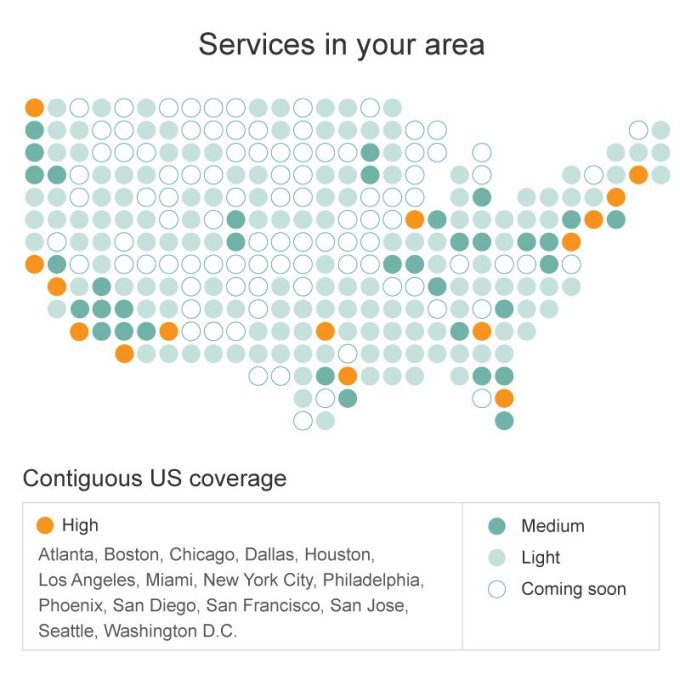 Amazon’s move into local services began in earnest this March, when it rebranded its “Amazon Local Services” as “Amazon Home Services.” Before this time, the site had only offered a limited number of service offerings in select markets, following a quieter rollout of local handyman service listings back in 2014. The original idea was to offer a marketplace for services that would exist alongside Amazon’s product listings. For example, if a consumer bought a big-screen TV, they could be pointed to a local installation service to help them mount it in their living room.

Originally, the services were offered to consumers in larger metros, including New York and L.A., as well as Amazon’s hometown of Seattle.

However, with the March rebranding, Amazon began to offer a variety of pro services that expanded beyond those that would make sense as add-ons to product purchases. At launch, the site offered services in categories like Home Improvement, Lawn & Garden, Automotive, Computer & Electronics, and Lessons. There was even a “More” category which was introduced as sort of a catch-all to things that otherwise wouldn’t fit in the other groupings. Here, you could find niche services like “goat grazing” or “singing performances,” at times.

Today, Amazon is reporting a few metrics on the performance of this Home Services vertical, noting that its service pros average 4.71 out of 5 stars, and 92 percent of customers say they would recommend Home Services to a friend. During the first half of this month, Amazon says it received nearly two times the number of orders fulfilled in June, and in the last three months, the number of new applications from service pros also increased by four times.

Home Services was also a featured promotion during Amazon’s Prime Day sales event, and that boosted orders by 20 times.

However, Amazon has not provided hard numbers about how many services consumers have booked, or the transaction volume it’s seeing. 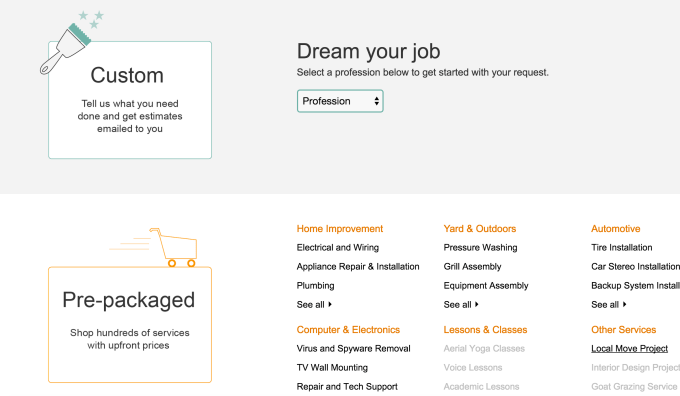 Today, the company notes that it’s now offering two different ways for consumers to shop Home Services: custom and pre-packaged services. The introduction of custom services means that customers can describe their needs using text and photos and then submit this request in order to get estimates from local pros. This new option will accompany the pre-packaged service listings which include standard things, like home entertainment setup or central air installation, for instance.

On the updated website, customers can create their custom requests for bids by first selecting a profession from a drop-down box – like “contractor” or “painter” – and then fill out a simple online form to submit their request.

The custom services have a different fee structure, Amazon’s site says. While pre-packaged services include a 5 percent transaction fee and 15 percent platform fee, custom services are 5 percent and 10 percent, respectively. A third category, recurring services, is 5 percent for each fee. Meanwhile, monthly subscription fees and background check fees are waived through year-end as Amazon gets the marketplace off the ground.

Amazon deducts the fees as a percentage of the service price, excluding any taxes.

Amazon Home Services competes not only with sites like Angie’s List, but is also competitive with Craigslist and other providers of local business information like Yelp or Google’s business listings.

For consumers, the draw is that Amazon is the place that you shop for anything – not just products – and it says that its pros’ prices are the same as they would be if you dialed them direct.