The growth in shopping-by-SMS services knows no bounds, apparently. The latest entrant into the field is now Photo Magic – no relation to on-demand delivery service Magic. (Or perhaps the company is aiming for brand confusion?). The new service is an offshoot of the photo book publishing company SimplePrints, which currently offers mobile apps that allow consumers to build books by uploading photos from their smartphones. With Photo Magic, however, the process of building a photo book is even easier – users can now just text in their requests to SimplePrints instead.

While there are already a number of alternatives to Magic, including Operator, GoButler, Fetch, and, more recently, Scratch, Photo Magic is among the first of this new cadre of services to exploit the idea of shopping by way of text messaging for a dedicated niche – in its case, photo books.

Like the others in this space, the process of “shopping” begins by SMS. On the one side, you have the consumer, who starts by sending a text to the company which is then handled by a “photo curation specialist,” who responds by asking a few questions and providing a secure link for uploading the photos to SimplePrints. (Apparently you can’t just text in your photos to the service, which would have been clever, if potentially less secure.)

That being said, the process is still quicker and far less painless than downloading a standalone mobile application and then customizing your photo book yourself. 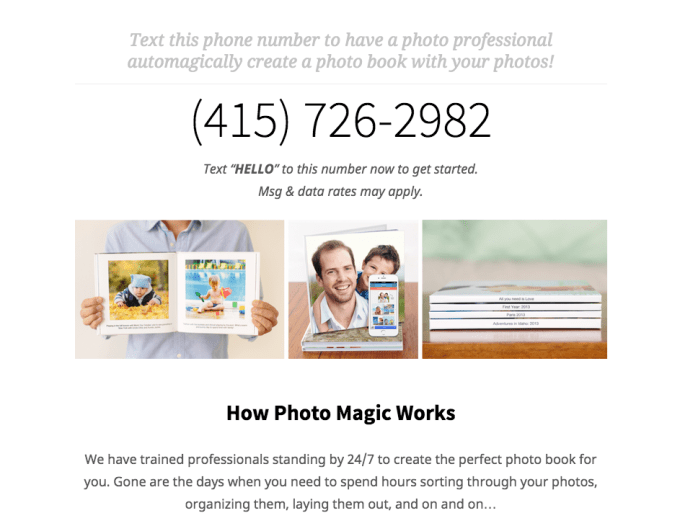 According to SimplePrints CEO Matt Sullivan, the idea to expand into the realm of SMS-based ordering was prompted by activity his team witnessed within the app’s user base. A number of customers would begin building a book on their smartphone, but then not make it to checkout.

“With SimplePrints we’ve tried to make the photo book creation process super simple and streamlined, but we still see a high percentage of users getting through the install, sign-up, and even adding a bunch of photos, only to stop there,” Sullivan explains. “When we ask them what happened, the answer is usually that they ran out of time or it was ‘too much work’ to layout the photos,” he says.

In addition, the app-less service also works to address a problem a number of startups are today facing: that despite the fact that consumers today are spending 85 percent of their time on smartphones using apps, only around five third-party apps (non-native apps) are regularly used. Niche apps like photo book builders can have trouble gaining traction in this kind of environment.

To its credit, SimplePrints has done fairly well in spite of these challenges. The company is today doing $4 million to $5 million in revenues and is profitable, says Sullivan. In addition, two-thirds of its customers had never purchased a photo book before using SimplePrints, and it’s also managing to attract high-value customers who are spending more than $40 per order on average.

With Photo Magic, the company now hopes to reach those potential customers who were interested enough in buying to download an app, but who dropped off before conversion was complete. Via the SMS-based service, they can order the same printed books that are available today – 8×8-inch hardcover and softcover books that hold anywhere from 20 to 200 pages. Because the books can fit four images per page, that means you could upload as many as 800 photos if you truly wanted to.

After uploading their photos via the secure link, customers are sent a proof to review, usually within 30 minutes. They can requests edits by texting, and, when those are approved, they’re texted a secure link powered by Stripe’s payment processing service so they can pay with a credit card. The books are delivered within 4-7 days from one of SimplePrint’s facilities in California or New Jersey. 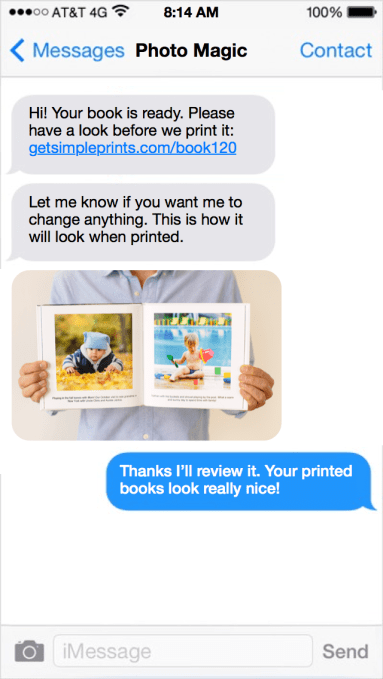 During its testing phase, SimplePrints found that human interaction was helpful when it came to getting customers to buy, as it would increase the likelihood that the customer finished the transaction. That may be true, but the market itself for these concierge-backed, shopping-by-SMS services is still unproven, and it’s unclear to what extent it can support a wide number of variations on the model for specific products. It’s also unclear whether it’s worth it to expand to SMS for a company like SimplePrints, with regard to its bottom line.

Still, photo book publishing makes sense for a niche SMS service, if there ever was one, because of how cumbersome and tedious the process of making a photo book is today for most customers. To let someone else on the other end do all the work for the same price is a good deal for end users. (Sullivan says he believes the economics will work out because of the potential for increased conversions in the long run.)