The three cities being evaluated are not being announced yet, as Birchbox says it’s first allowing customers to enter their zip codes and vote on the locations. Then, the company will kick off its “Birchbox and Birchbox Man Road Trip” – as the event is being called – on August 7th. The trip will involve turning two shipping containers into mini-shops, and will allow customers to browse and purchase full-size beauty, grooming and makeup products, as well as engage in other events and activities, including free beauty and grooming services.

Birchbox is known for its low-cost beauty product sampling service – one of the first “box of the month” clubs, that eventually spawned a host of competitors dubbing themselves the “Birchbox for X.”  Today, the company reports that 35 percent of its revenue comes from e-commerce sales of full-size products. This is up from the 30 percent Birchbox reported last year when the company announced its $60 million Series B round.

The idea with Birchbox, for those unfamiliar, is to whet consumers’ appetite for a variety of products by first allowing them to try samples of high-end beauty and grooming products. After subscribers discover something they like, Birchbox makes it easy for them to then purchase the full-size product from its website. In other words, the monthly box is what eventually fuels conversions on Birchbox’s online store. According to internal company metrics, 50 percent of Birchbox subscribers end up buying a full-size product on its online store, where Birchbox now features over 800 brands.

The subscription business has 1 million subscribers in total, and while the company doesn’t share revenue numbers, recent estimates indicate the international retail business now pulls in $170 million per year. 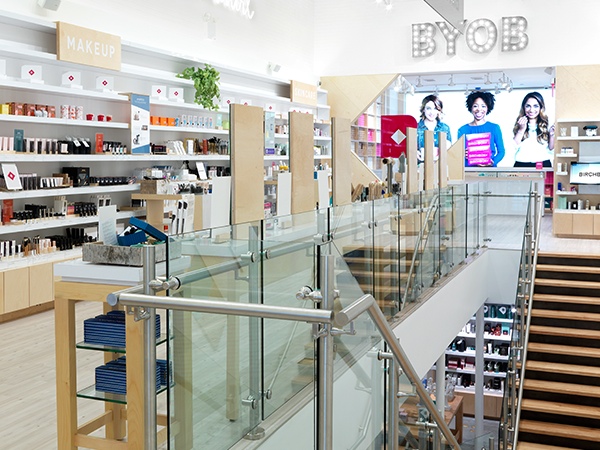 Birchbox’s Road Trip concludes on August 29th, and its results will help to determine which two of the three cities will be home to Birchbox’s new stores. According to a company spokesperson, Birchbox will not only make its decision based on sales, but also on metrics like how many shoppers came through the stores, as well as general customer feedback and interest.

This isn’t Birchbox first offline expansion beyond its Soho store – the company announced last month a partnership with Gap that sees it opening pop-up shops in seven flagship Gap locations including San Francisco, Chicago, Los Angeles, and Houston, plus three in New York (Flatiron, Lincoln Square, and Herald Square). Its interest in the offline channel has to do with the quality of the customer it can acquire here – offline customers have 3 times the lifetime value, says Birchbox.

These new offline pop-up shops won’t only be featuring the full-sized products it sells, the company notes. They’ll also focus on introducing new consumers to the brand, too. In these three locations, there will be a “subscription wall” where customers can order a three-month Birchbox subscription and leave with their first box in hand. This can either be a curated box Birchbox builds itself or they can choose their own items at a “Build Your Own Birchbox” station.

To encourage customers to vote on the city selection, Birchbox is now running a promotion which awards $5 worth of Birchbox points to those who share their votes on social media. Voting ends on July 17th, and the three selected cities will be announced on August 3rd.

Birchbox is now one of several e-commerce marketplaces that’s experimenting with engaging customers via offline promotions and pop-up shops over the summer holidays. Amazon, for example, earlier announced its Seattle-based “Treasure Truck” (though apparently ran into delays), and eBay also has been driving an Airstream trailer around the Hamptons and New York to connect shoppers with its various deals.