Three decades of development are about to culminate in a 24 hour period of discovery.

Tomorrow NASA’s New Horizons space probe will reach the finale of its 9-year journey to the outer reaches of the solar system. The mission, a 13-year study in marshaling resources, could be a lesson to any startup. And regardless of the outcome of tomorrow’s flyby, the probe has already revealed one hell of a planet. 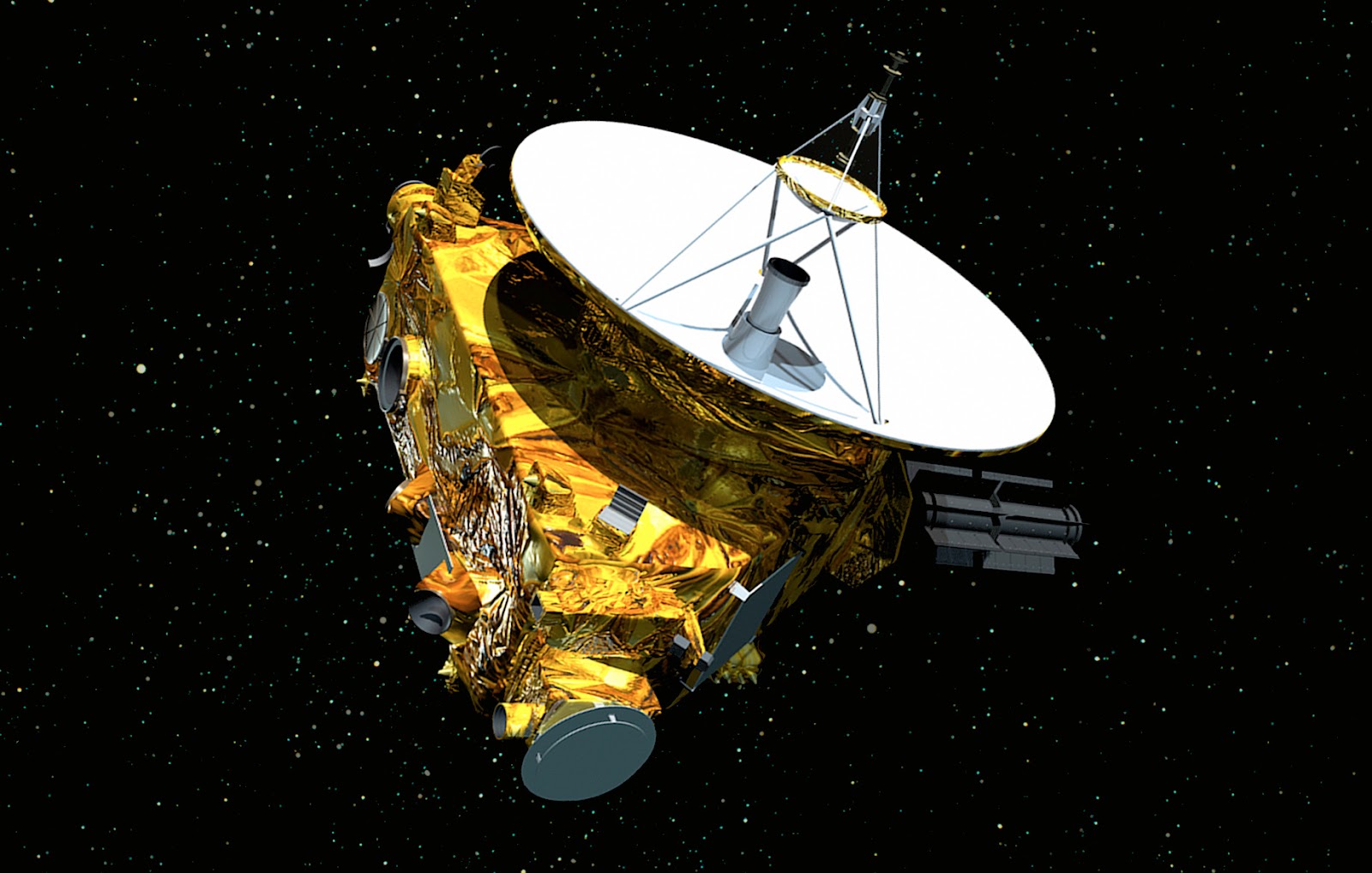 Planning for the New Horizons mission began in 1989 thanks to the work of Dr. Alan Stern, the principal investigator of the New Horizons mission to Pluto. The economics and logistics of this Pluto require a fast flyby and subsequent transmission of 64 GB of scientific data at a snail’s pace of just 1 kilobyte/second. Starting the day after tomorrow, if all has gone well, thirteen months will be needed to transmit the data back to Earth from over 6 billion kilometers away.

“At 7:49 AM EDT on Tuesday, July 14 New Horizons will pass by Pluto at 30,800 miles per hour (49,600 kilometers per hour), with a suite of seven science instruments busily gathering data. The mission will complete the initial reconnaissance of the solar system with the first-ever look at the icy dwarf planet.” – NASA

Initially, the mission called for using a low-cost derivative of the Galileo and Cassini deep space probes called the Mariner Mark II. With a name right off the car lots of Detroit, the Mariner Mark II was supposed to be the lowest cost option. However, it wasn’t cheap enough as NASA went through a dark period of budget cuts and austerity through the nineties.

The remains of Clyde Tombaugh are perched on the hull of the New Horizons space probe, about to fly by the planet he discovered in 1930. Tombaugh’s ashes will then continue a voyage into the Cosmos. (Credits: NASA)

Fast-forward to the alternative that became New Horizons and Americans now have a nuclear-powered, baby grand piano-sized probe on final approach to the planet (discovered in 1930 by Clyde Tombaugh, a Kansas farm boy working at Flagstaff Arizona’s Lowell Observatory). Tombaugh passed away in 1997, but his cremated remains are along for New Horizon’s journey through space. His are the only human remains to leave the Earth-Moon system and the solar system.

Perhaps Pluto will; through New Horizons. After a 3,461 day journey, in its final day before the flyby, the space probe is revealing that this small body — a dwarf planet by designation of the IAU, and the only dual synchronized tidally locked bodies in the solar system — has complex and mysterious surface features. Features that could possibly present a case for its to return to the status of the 9th planet of our system.

Like the other planets in the Solar System, Pluto and Charon were formed 4.6 billions years ago. The New Horizons team has aged 10 years since launch and some long-standing members like Stern  have been waiting for this moment for nearly three decades. There have been achievements along the route to Pluto. A flyby of Mars, of Jupiter and its moons and of an asteroid, but it is almost all for naught if the space probe fails in its final hours as it flies by the binary system of Pluto and Charon. 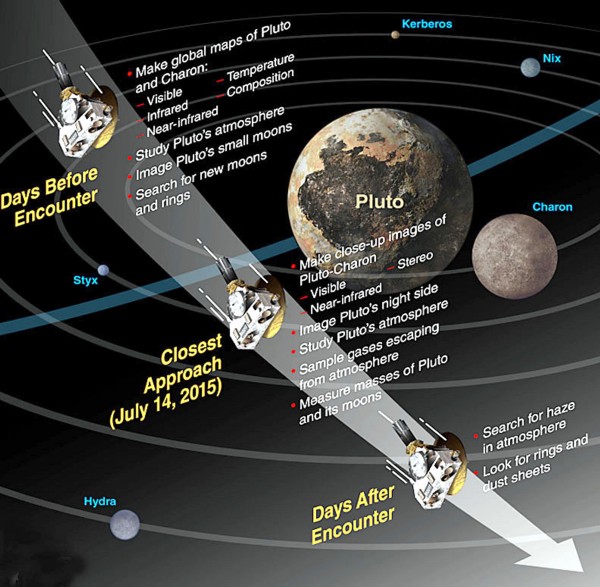 A NASA illustration of the New Horizons space probe during closest approach to the Pluto-Charon binary system. (Credit: NASA)

During nearly the entire journey, the New Horizons team has depended on the Long Range Reconnaissance Imager (LORRI) to return images. The telescopic system makes up for the modest 1 megapixel detector, 13 year old technology far exceeded by today’s smartphone cameras. Together, the three cameras will resolve features as small as 100 meters (320 feet) during the flyby.

The probe will fly within 13,000 kilometers (8000 miles) of Pluto’s surface and within 29,000 kilometers (18,000 miles) of Charon’s. During closest approach, two cameras – Ralph and Alice – are critical to mission success. Named after the iconic characters of the American sitcom the Honeymooners, these instruments are imaging spectrometers. Alice will image the surface in ultraviolet light and Ralph will in visible and infrared. Altogether, the spectral images will reveal the chemical composition of Pluto’s and Charon’s surface and Pluto’s ultra-thin atmosphere. 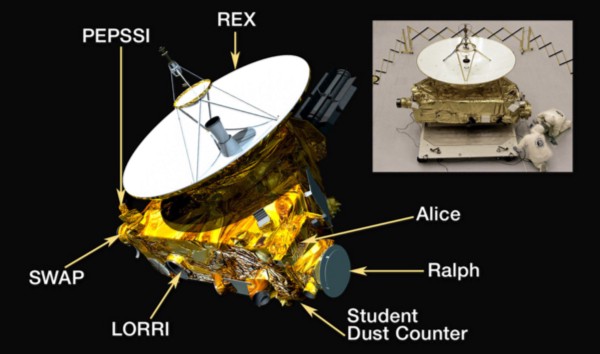 The space probe has stopped radio communications in order to focus all its resources and literally turn all its attention towards Pluto and Charon. The probe’s cameras will scan the two small bodies with the pushbroom method of optical scanning. The probe’s computer will step through a rehearsed command sequence that will turn the space probe towards the planet’s surface and towards Charon and the tiny moonlets of the Pluto system.