“8 seconds to pick up, impossible to put down,” reads the strap-line of new mobile game startup 8sec. The company, co-founded by serial investor and entrepreneur Jérémie Berrebi, sits at the extreme end of casual gaming. Its business model feels extreme, too, promising to release a new mobile game each week.

“After meeting countless developers in love with their ‘perfect idea’ for a game, not interested in what the players were after, we decided to take matters into our own hands,” Berrebi tells me.

“Why bother spending months or even years of development on a game that nobody wants? Let’s make a new game every week, covering all kinds of genres, from puzzle games to runners, and see which ones are the players favourites.” 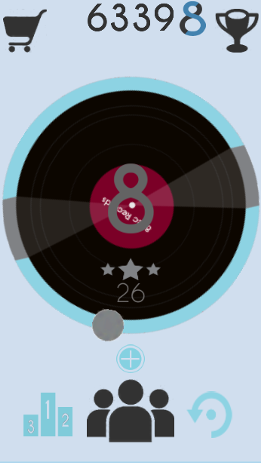 If that sounds a lot like a spray ‘n’ pray approach to game development, perhaps that’s because it is. Berrebi’s VC fund, Kima Ventures, which he quit in May, also famously promised to fund 1-2 startups per week with a 15 day turnaround from application to investment. But, actually, like Kima, there’s science behind the art.

“We develop every game we publish, and try to cover all kinds of genres,” says Berrebi. “If the first version of a game is successful, we work on the concept, A/B testing it to improve it and give the players more of what they liked. By using smart advertising, we aim for the right balance between immersion and revenue without compromising the user experience.”

By “smart advertising,” Berrebi is referring to the way the frequency of ads inside 8sec games are designed to not feel spammy. “Rather than spamming with ads every thirty seconds, we adapt the frequency of ads depending on the type of experience each game is supposed to deliver,” he says. A second revenue stream exists in the form of in-app purchases that unlock additional game content.

Operating in stealth mode for two months, 8sec has already launched over 20 games on iOS and Android. The first game, Speed Loop, has been downloaded more than 20,000 times, based only on word-of-mouth marketing, apparently.

Meanwhile, Berrebi says the startup has raised a mostly friends and family round of $215,000. Those friends, however, include 500 Startups, Jean-David-Blanc, Laurent Gerbi, David Maruani, Richard Dunn, and Oleg Tscheltzoff.