When Quip was first debuted to the world two years ago by co-founder and former Facebook CTO Bret Taylor, its unique selling point was that it was a “mobile first” word processor, built for the always connected, always collaborating smartphone and tablet generation. Fast forward to today, and things are evolving — or taking a step back, depending on how you look at it: The startup is releasing its first official desktop apps for Mac and Windows.

It’s a somewhat ironic turn, given that when he was first launching Quip, Taylor mocked legacy word processing programs, noting that “It’s comical how similar [MacWrite] looks like what we use today” and how most desktop programs don’t address how consumers are turning away from legacy computing devices.

So why the change of heart? Quip is following its users.

Quip today has over 30,000 businesses and “millions of individuals” using its apps, including companies like Facebook, CNN, Instacart and Al Jazeera — a figure that has grown dramatically since the company launched spreadsheets last October (when it only had 10,000 business customers).

“That’s meant we’ve had an explosion of desktop website usage,” he says. As a point of comparison, in January 2014, the split between mobile and desktop was 80/20. Today, it’s 50/50, Taylor says. While those desktop users could access documents through the web, was time to give them a dedicated native app.

While the app gives users more parity between desktop usage and Quip mobile apps — same features to access and modify documents, and also provide a space for coworkers to comment on them and other things — it also has a few features unique to the platforms on which it sits. The Mac version, for example, integrates with Spotlight search, and also gives users native notifications when documents that their tagged or working on get modified.

With the update, Quip’s also opening up a bit more about how it’s architected its whole service, which in itself is a pretty fascinating idea and points to why the company thinks that — even as a later entrant into desktop word processing against incumbents like Microsoft Word, or cloud-based services like Google’s Apps — it has a distinct advantage. 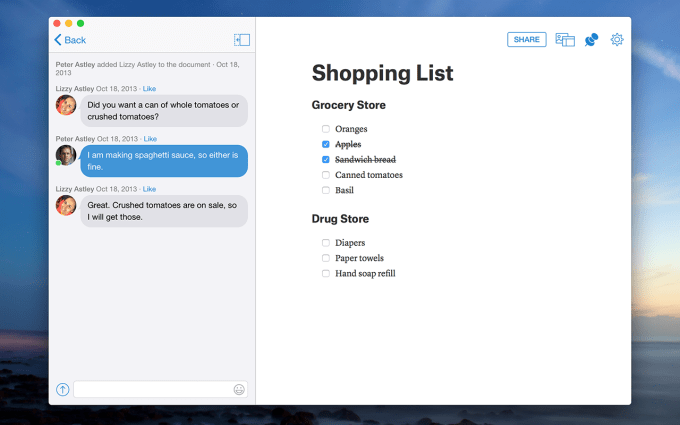 In essence, as Taylor describes it, Quip has “abandoned the concept of a file.” Instead, it has broken down documents into small, more granular modules.

First, when two or more people are working on a document, you can edit different sections simultaneously and they are much easier to integrate with each other.

What it also means is that if you are offline and are editing a document, and someone else is editing it elsewhere, you are less likely to have conflicts between versions, since the only parts being impacted are those more granular sections that you have modified. Taylor tells me that in cases where there are conflicts, the two versions of the fragment in question are saved in the collaboration notes that are always present alongside the document so that you can decide which revision wins.

Second, the more granular segments for the files also means that when a document is being accessed, read and edited, it behaves in a much faster way than your typical, possibly more choppy version being accessed from the cloud.

“Offline and online are no longer separate binary states,” he says. “Our perspective is that online and offline should have a much more seamless transition.” This is more than just a concept. In action, files in Quip never “download” or work in a stuttered way in the cloud. While they remain in the cloud, they perform as fast as if they are local files.

You can read more about how the apps are designed here.

Quip the startup is not revealing anything about revenues or other numbers that might speak to how well it is doing — its service pricing ranges from a free tier, to $12/user/month to larger enterprise deployments that are priced on an ad hoc basis.

However, Taylor says that it’s doing well enough that it has burned through a lot less of the cash that it has raised so far and is not in any hurry to raise more — although it hasn’t been for lack of VCs knocking on its door regularly. To date, the company has raised $15 million from investors that include Peter Fenton, Yuri Milner and Marc Benioff. 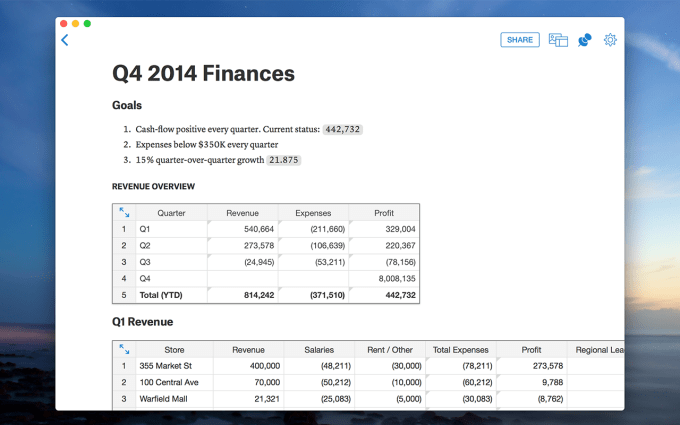