Reddit just admitted it royally screwed up. Not just over the firing of Reddit community manager Victoria Taylor on Friday, but also for not listening to the community over the past several years.

Volunteer Reddit moderators systematically shut down threads in protest after hearing of Taylor’s dismissal last week. Many said she was the only moderator who got them and communicated with them during Reddit’s “Ask Me Anything” interviews.

Interim CEO Ellen Pao posted an apology to the Reddit community today with the following message:

Today, we acknowledge this long history of mistakes. We are grateful for all you do for reddit, and the buck stops with me.

Pao goes on with a promise to improve – and not just in words, but in deeds by appointing u/deimorz and u/weffey to work with team moderators for building and improving tools moderators need. Pao also appointed u/krispykrackers as a moderator advocate and said she would add the option for moderators to default to the old search, enabling moderators to stay updated on existing workflows.

“We’re also going to figure out the best way for more administrators, including myself, to talk more often with the whole community,” writes Pao.

True to Reddit, the community responded with demands in the comments below the post – many of them negative, though some thanking Pao for making the effort. 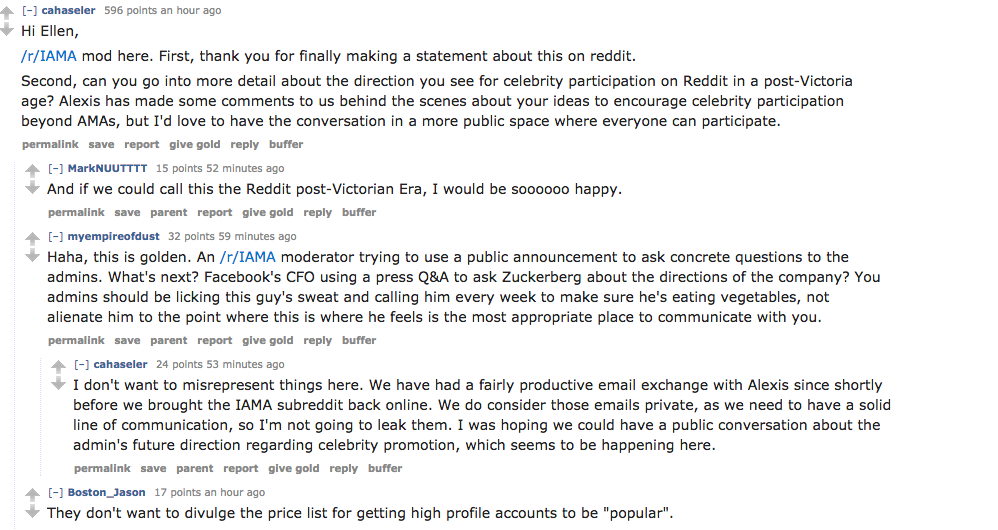 One interesting part of the apology is that Pao does not specifically comment on the firing of Taylor or anything she might do surrounding the action that originally led to this uproar.