While the rise of standalone streaming services has been fueled, in part, by increased connection speeds combined with the ubiquity of smart mobile devices, video consumption is still often taking place in the living room. And in the case of Hulu’s over-the-top streaming video service, living room viewing is actually on the rise. Today, living room viewing accounts for over 58 percent of Hulu’s content streams, the company reports, up from 44 percent back in the first quarter of 2014.

The rise has been fairly rapid – by the third quarter of last year, watching Hulu via living room devices was already at 50 percent.

The trend is not limited to Hulu, either. In a recent industry report from Freewheel, the firm noted that video viewing via over-the-top streaming devices is up 380 percent year-over-year, while viewing over smartphones is up 105 percent.

Hulu’s SVP of Advertising Sales, Peter Naylor, shared this and other data from Hulu’s network with Media Village in June, where he also noted the impacts the trend was having on Hulu’s viewership numbers. That is, the company now has to account for the fact that many of Hulu’s streams are being watched by multiple people at a time. By working with comScore, Hulu found that its over-the-top streams average 1.4 viewers per stream, but on some devices and for certain shows, co-viewing is higher – up to 2.x at times. In other words, streaming media services are being watched more like traditional TV: on the big screen in the living room, with other friends and family gathered around. 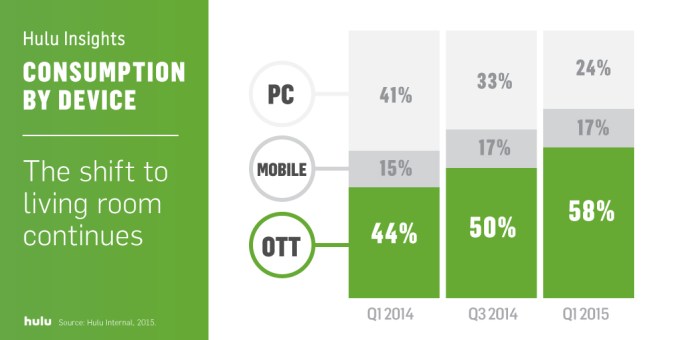 For Hulu, its increased presence in the living room didn’t come at the expense of mobile viewing, however – the numbers for mobile have remained fairly consistent, growing from 15 percent in Q1 2014 to 17 percent the following year. Instead, living room viewing’s rise has occurred as PC viewing shrank – down from 41 percent to 24 percent between Q1 2014 and Q1 2015.

Hulu’s living room data holds up in comparison with a smaller, independent survey run by a cord cutters’ enthusiast site, CordCuttersNews, which asked over 1,000 people via Reddit (/r/CordCutters) and Facebook which devices they used to watch video content. Many of the popular answers included Roku, Chromecast, Amazon Fire TV, game systems and smart TVs. (In addition, OTA antennas also had a strong showing, as did PCs, in this more anecdotal survey.) While this survey is biased towards those who have cut the cord entirely – not everyone who pays for streaming services like Hulu has ditched cable TV – it does show how people are adopting media players like Roku (68 percent used) these days to watch their favorite TV shows and movies.

That survey also found that cost was a big driver behind users’ decision to cut the cord, and they’ve largely replaced their traditional TV viewing with streams from (in order of popularity:) Netflix, Amazon, YouTube and Hulu.