Shuddle, a car service founded one of the co-founders of Sidecar which focuses on providing rides to busy families – including kids and seniors – is today launching a new mobile application called ShuddleMe which allows teens and tweens to schedule rides for themselves. Because of the ages of the clientele, these rides are only booked after a parent or caregiver provides authorization from their own Shuddle mobile application.

Currently operating in the Bay Area, Shuddle has been carving out a niche for itself by offering what it hopes will be a safer alternative to services like Uber. Its drivers carry specialized insurance that allows them to transport those under the age of 18, and they go through additional training and more extensive background and reference checks. All of this is aimed at making sure its drivers are the most trusted, says CEO and founder Nick Allen, who left Sidecar in 2013.

Also unlike Uber, Shuddle drivers often need to do more than just show up curbside. They will also sometimes have to go into schools and other places to collect their passengers or sign them out. 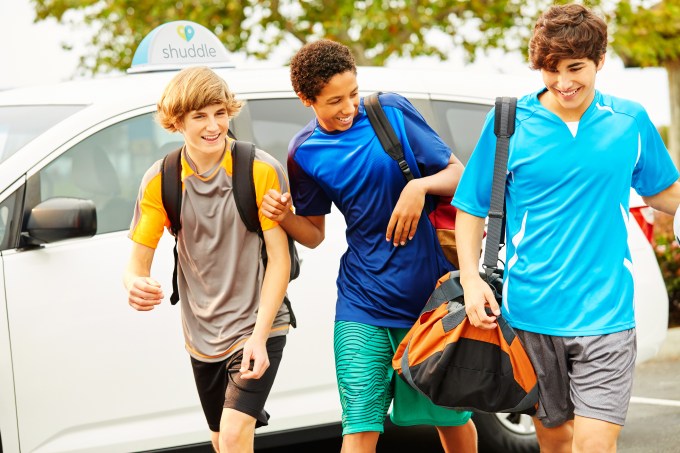 Until today, however, the process of scheduling rides was only available to parents or caregivers through the main Shuddle application. But that didn’t always work well with the way kids’ schedules play out in real life.

“We wanted to create a kids version because by nature, teens and tweens have more flexibility and unpredictability in their schedules and need an app that is more or less on-demand,” explains Allen. “With ShuddleMe, kids can book a ride up to an hour in advance, meaning they can book a ride in the morning to meet their friends for a movie in the afternoon. Once a request is made, parents will be prompted to approve or decline the ride,” he says.

The app allows kids to have some autonomy and freedom – which they’ll obviously like –  but keeps parents in control and aware of their child’s whereabouts.

After the ride is booked on ShuddleMe and a parent approves the trip, parents and kids both receive the driver information, including their bio, photo and car information in the ShuddleMe and Shuddle apps. Parents are also able to track the ride in-progress using their Shuddle app, and will be shown an estimated ETA. And finally, when the ride is complete, parents pay through their own app, so kids don’t have to carry cash.

Plus, Shuddle’s app allows parents to contact company support at any time during a ride, if they have concerns.

Another differentiating feature versus many other rideshare services is that the majority – now as high as 99 percent, notes Allen – of Shuddle drivers are women. Because of the safety issues involved with picking up strangers and driving them around, women have been attracted to Shuddle’s value proposition. Daytime rides involving ferrying children or seniors to and from school, appointments and other activities is also something many Shuddle drivers were doing before, while working as nannies, for example.

Allen says he expects the new ShuddleMe app to be used by kids ages 8 to 16. These riders must have their own phone, be able to enter and exit a car with limited assistance, be comfortable riding without parental supervision, and be legally able to ride without a booster seat.

Shuddle will continue to charge its monthly membership fee of $9 to help cover the additional verification process, in addition to fares based on mileage and time.

Since its launch, the service has grown to include thousands of users and hundreds of drivers, says Allen. And earlier this year, Shuddle closed on $9.6 million in Series A funding designed to expand its business beyond the Bay Area, bringing its total raise to date to $12 million. Investors include RRE Ventures, Comcast Ventures, Forerunner Ventures, Accel Partners and others.

The new ShuddleMe app is available as a free download on Google Play, with the iOS version launching shortly.