Recipe-sharing site and online shop Food52 expanded its service today to include a wider selection of products and a wedding registry which includes cookware, plus other kitchen and home goods. The site, which has now grown to over 680,000 registered users and 4.4 million uniques per month, today features over 2,500 items from around 600 merchants, the company reports.

Co-founded by former New York Times food editor Amanda Hesser and Merrill Stubbs back in 2009, Food52 closed on an additional $6 million in outside funding last fall, following the launch of its online store which had then grown to account for two-thirds of the company’s revenue. Before, the site was largely known as a recipe-sharing service and a place to read related articles. At the time of the funding, Food52 had 350,000 registered users and 3.8 million uniques monthly.

Food52 also says its online orders are up 51 percent year-over-year as of the first quarter of 2015, and year to date gross sales are up 48 percent year-over-year as well. While a big draw for its user base is still its extensive collection of crowdsourced recipes – there are now 35,000 recipes on the site – the commerce business continues to contribute to a large part of Food52 revenue. It makes sense then to double down on that investment with the addition of a registry to continue to grow its sales. 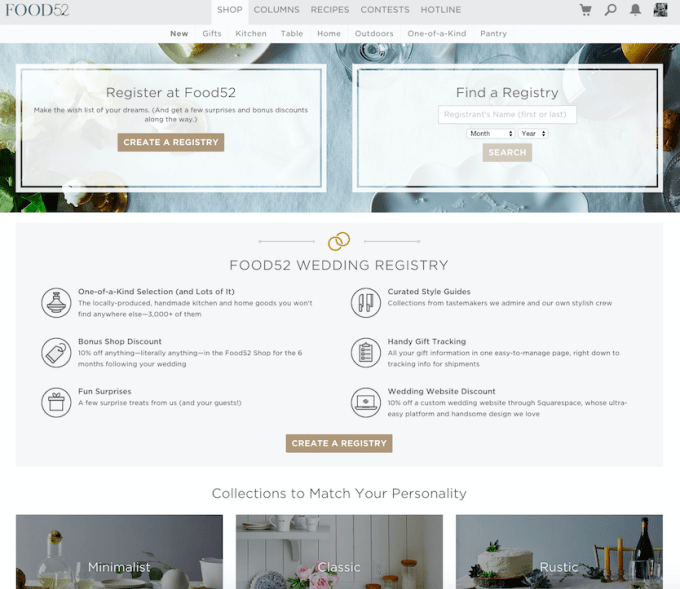 However, unlike traditional online registries, Food52’s version lets you search by style and personality type rather than just products. For instance, shoppers can browse by “Classic,” “Minimalist,” “Rustic,” “Luxe,” Indie,” or “Retro,” and can also dig into categories like Kitchen, Table, Outdoors and Pantry, or can browse by “theme” like “Registry Essentials,” “Basics,” “Standouts,” and more.

The idea is to connect shoppers not just with products, but to help them find inspiration as well – something that’s seemingly Pinterest-inspired.

In addition to creating the registry on the site, the service also includes a gift-tracking option, discounts on wedding websites on Squarespace, and the ability to take 10 percent future Food52 orders following the wedding for up to 6 months. The latter is a clever way to make sure couples return to the site to complete their collections, it appears.

The company notes that its product mix may include fewer options that traditional registry sites, but its selection is unique: the cookware is chosen by trained chefs, and it also features handmade artisan goods which are not as commonly found. And the company continues to blend commerce and content, as before, with collections of items from various tastemakers, including Local Milk blogger Beth Kirby, fashion executive Michael Mosca, and style writer Amanda Brooks. 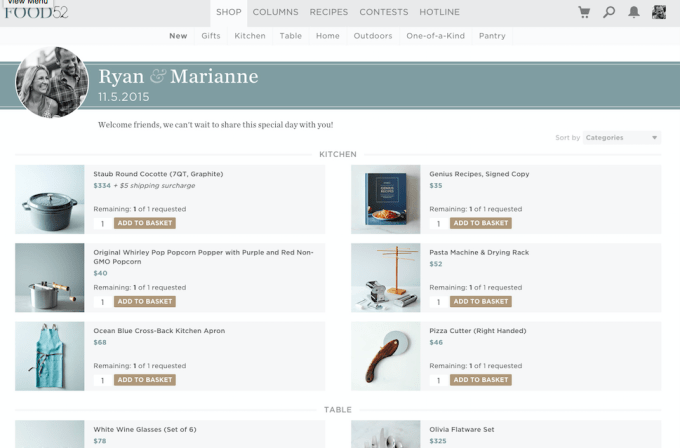 The registry launch isn’t the only thing Food52 has planned for this year, as a result of its additional funding and continued growth. For three weeks during the holidays, it will launch an NYC-based offline retail presence, and is evaluating options in other cities, too. Also in the works is a Food52 mobile app which is expected to arrive by year-end.

The new registry is live as of this morning at food52.com/registry.