Google today announced the launch of a new site called News Lab, a destination that aims to connect journalists with programs, data and other resources to aid in their reporting. The site will feature a number of tools for newsrooms, including tutorials and best practices on how to use Google products in reporting, as well as provide access to the recently updated Google Trends service, and more. It will also showcase Google’s numerous efforts surrounding new media partnerships and citizen reporting.

The News Lab site builds on a series of announcements that came out last week which were similarly focused on Google’s increasing efforts to play a larger role in the world of journalism. For example, in partnership with social news agency Storyful, Google rolled out YouTube Newswire – a curated and aggregated feed containing daily newsworthy events that have been published to YouTube. It also announced a series of initiatives aimed at supporting and verifying news videos on YouTube. These included WITNESS Media Lab, which will produce a number of in-depth projects on human rights issues, and The First Draft Collection, which teamed up journalism experts to train others on video verification, research and ethics.

These, too, will be housed and linked to from News Lab, which is now serving as the home for Google’s many projects in the journalism space. Here, Google will keep a continually updated list of tools and resources at g.co/newslab, and the site will feature Google’s various media partnerships and projects, including those listed above. 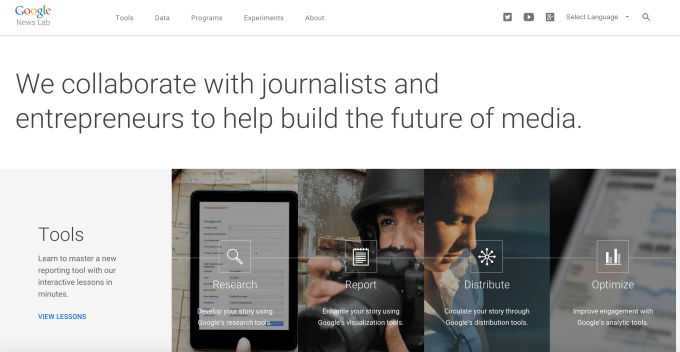 The site currently details some of the partnerships Google has undertaken, such as its efforts with the San Francisco-based media accelerator Matter; grassroots journalism organization Hackers/Hackers; TechRaking summits Google is holding with the Center for Investigative Reporting, and others. Plus, the site offers information on hackathons dedicated to developing new investigative tools, like the use of drones in reporting. And, as a global initiative, Google’s News Lab will also power the training and research arm of Google’s Digital News Initiative in Europe, the company says.

Meanwhile, the “Data” section of News Lab links to the recently updated Google Trends service and highlights media organizations which have used Google Trends data in their reporting. On Wednesday last week, Google rolled out a redesign of Google Trends which now brings real-time data for 28 countries to its service.

The move to better showcase Google’s tools and resources for reporters comes at a time when a number of social media services are often found to be the place where news first breaks. These social media posts then become embedded in reporter’s stories, including Facebook updates, tweets, and now, live streams from services like Twitter’s Periscope or Meerkat.

With citizen reporters regularly turning to social media first – and not typically on Google+, the company’s own social media site – Google is working to assert the variety of other ways it has to participate in the reporting process, ranging from first-hand videos posted to YouTube to its wealth of data and information collected from the world’s searchers.

Google is smart to play up the troves of data it can offer journalists, as that’s the company’s strength. More importantly, it puts access to Google’s tools all under one roof which will make it easier for those looking for this sort of information to find it more quickly, bettering Google’s chances of having its data used in reporter’s stories.