While Taylor Swift just took a stand against Apple for not paying up-and-coming artists for their work, not every artist is in that camp. How do classic rockers, whose careers blossomed when MTV was still about music television, adapt to the age of streaming media?

Some, like the legendary Guns N’ Roses guitarist known as Slash, head to BitTorrent.

Slash is the latest artist to release his work in a Bundle on the peer-to-peer file sharing site. He and his new band Myles Kennedy and the Conspirators released the BitTorrent bundle “Live at the Roxy,” on the file sharing network this past week.

I was able to get on the phone with Slash while he was on tour for his latest album “World on Fire” to ask how he makes use of new technology and what he thinks of Apple, TIDAL, Spotify and other streaming services. Here’s the full transcript:

Me: So let’s get right to it. Why, of all the things out there you could release on, why did you decide to release ‘Live at the Roxy’ as a BitTorrent Bundle?

Slash: It’s really simple. I just want to be able to use as many outlets as possible. And because a lot of people do like BitTorrent, they’re a legit company and you should go to as many places as you can put your product as possible that people are into. You should by all means do it.

Me: Yeah, it’s an interesting move, especially in the time of digital rights and music streaming, Spotify and Apple Radio about to happen. What do you think of that?

Slash: It’s really an interesting subject. It’s sort of like the Wild West out there. There is no main avenue that everybody is using. Everybody’s just sort of going out and trying different things, trying to figure out what works.

Which, all things considered, you just have to go so many different places at once so people can’t ignore that it’s out there. But we haven’t really figured out what’s going to be the most conventional, day to day way of putting your material out there. 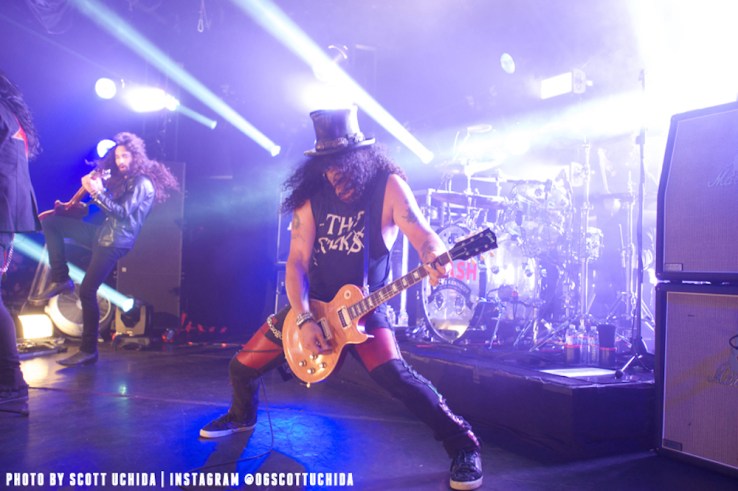 Me: Where is music headed, do you think?

Slash: I have no idea where that’s going to head in the next month, four or 5 years, 10 years. I mean, we’ll see what happens, but I think it’s, it’s something that’s just a long‑term development process that no one can see the light at the end of the tunnel.

In a way, it is sort of fun, but at the same time there is the question one needs to ask, and that’s what you just asked which is where is this going?

Slash: I mean, BitTorrent in, in this capacity is what you would be considering new, and so it’s a little bit hip and different. In a way, an artist can turn people onto his platform, and the platform is turning people on to the artist, so that’s sort of like a win‑win situation.

But it’s hard to know exactly how that all turns out in the end. But it’s something that’s just a cool thing to do. 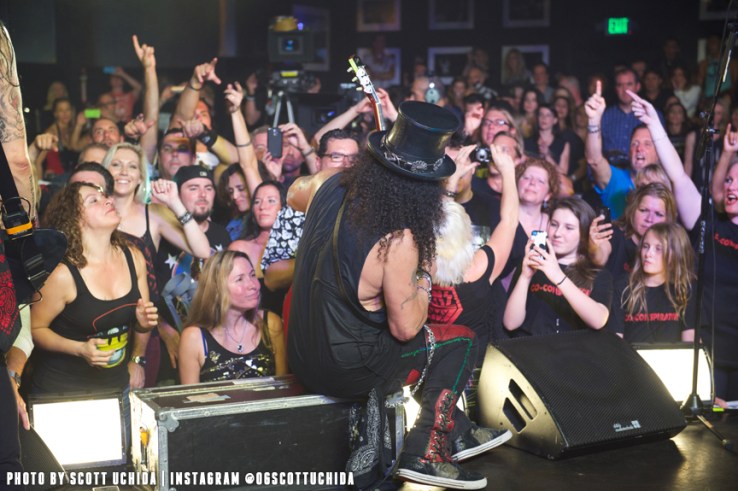 Me: So a bunch of artists in Hollywood got together and pledged their allegiance to something called TIDAL. What do you think of that attempt?

Slash: No, I mean, I really don’t know anything about it.

Slash:  I’m not, not at liberty to say anything of interest.

Me: OK. That’s totally fine. What do you think of what Apple’s doing with the new Apple Radio and bringing guest DJ’s from all over the world?

Slash: Yeah, now that’s, that’s (he pauses for a bit) you’re aware of it but you know, that’s when you start to get into an area that doesn’t really interest me.

Slash: I mean, we start talking about Apple Watches, and all the fun things that you can do with your wristwatch. It’s just not my thing, you know? And I don’t think I want to go down the path of like, you know, get the Apple wristwatch, and you can download the record on it, or some shit like that. 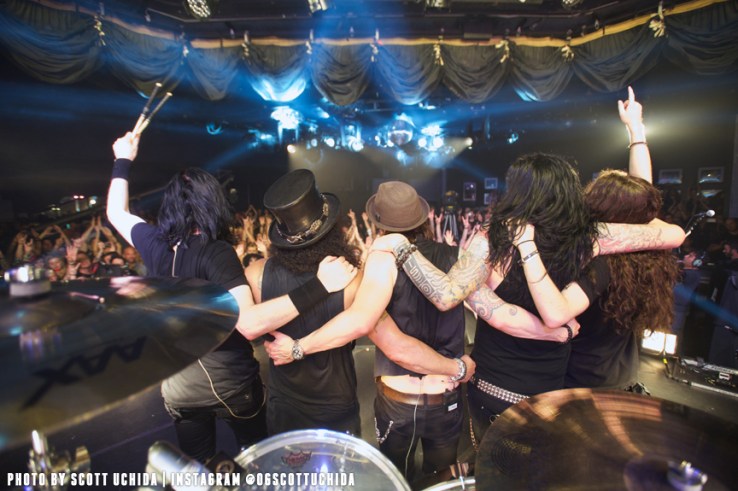 Slash:  All I’m really into is just trying to find neat, not so fancy places to just put out our music and have people be able to access it. I don’t like gimmicks; I’m not into, you know, gadgets and so on and so forth.

Slash:  Spotify is a good one. BitTorrent has some cool stuff on there. They’re starting to, and so that’s an interesting place to see what they get and what is going on. But, for the most part, I’m somebody who still likes to listen to stuff in his car. I tend just to play CDs, you know?

And that’s one of the reasons why we still put out CDs and why we put out vinyl.

Slash: But I mean Spotify is one of the ones that I go to listen to stuff. I mean, iTunes is somewhere that I know if there’s a new album I’m familiar with it’s an easy place to go and get it. I’ll go where I can find it. Some stuff is more obscure than others, and you can’t find it in all the places, so you have to go look for it.

But, to be honest, when it comes to new music, I like to have a physical in my hand. I’m still old school that way.

Me:  I don’t think you are alone there. A lot of people like that physical experience.

Slash:  I’m sort of straddled over both, like, from the old school, new school. When the whole online digital thing took off, I didn’t like it. I love the convenience of it and how fast it is. I don’t like the sound quality of it, and I don’t like the fact that it makes everything so faceless.

It’s like it loses the personal kind of thing that it had when it was on a record that you go to the store and pick up and take home, take it out of the wrapper. There was something about it that had a special quality to it.

Your collection of records is a very personal statement of your own. I have a turntable at home, and I have all my vinyl all stacked together. And it’s something that is like buying a book. It’s like, it’s like reading.

But like I said, the flip side is that it’s so quick, and it’s so convenient to be able to do it from wherever you are with your laptop or your smartphone. 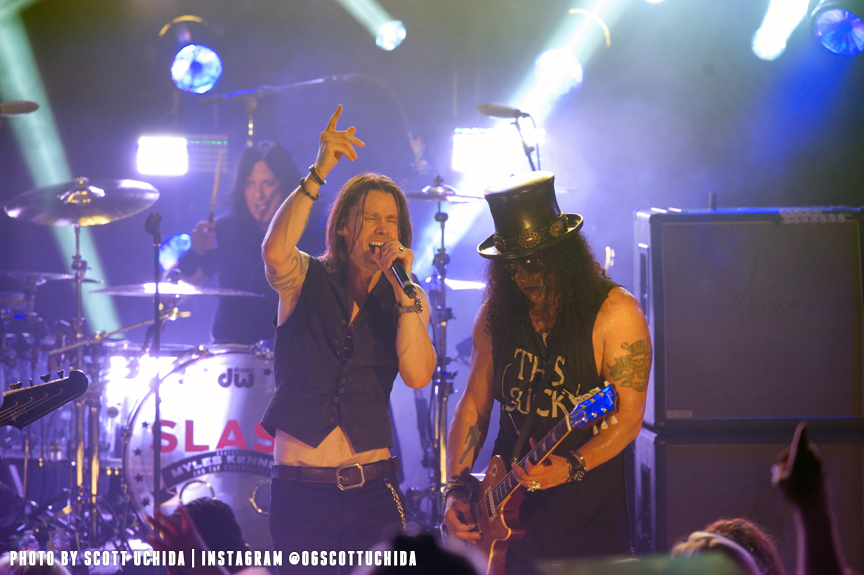 Slash:  This is innately me in a nutshell. There’s something about that that is missing. I mean, I suppose you can go on somebody’s computer and look at their record collection, but it just doesn’t have the same effect.

Me:  The one other thing I wanted to know is you recorded this live at the Roxy back in September, were you holding off and waiting for the right opportunity to release it? Or was this something kinda cool that just came about and you thought you’d release it this way instead of September when you did the show?

Slash: Well, in September we just put out “World on Fire” and we did the show at the Roxy along with a couple of other shows. So to celebrate the new record, and go out and get in front of the people in front of it, we had a small, intimate setting [at the Roxy]. And we decided to film one of them and thought later on we should do something with that. It’s really cool, you know?

So we decided to put it out, but we didn’t want to have it too close to the release of the World on Fire record, obviously, so we just put it on the back burner for a while, and we’ve been touring on this record since September. We figured now is probably a good time to put it out because it’s summertime, and we’re touring all the festivals this summer. 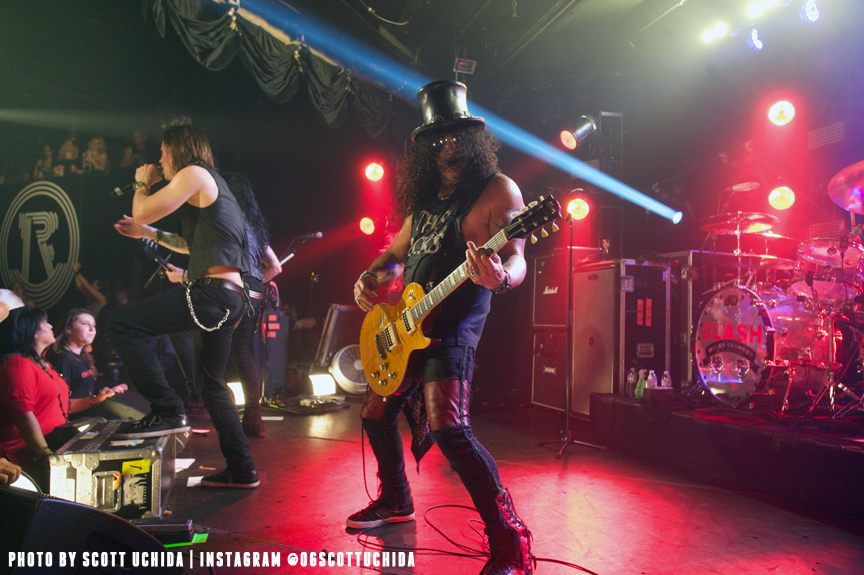 Me:  So you’re in Belgium, right? Where are you headed next?

Me:  Italy, that’s an awesome place. I’ve been all over there. If you could say anything to your fans about BitTorrent what would you say?

Slash: BitTorrent’s a great fuckin’ platform for downloading new music, and so you should give it a try.

Me: Slash, thanks for your time, coming on with me and talking about your tour and BitTorrent and this bundle, thank you!

Slash is the 15th celebrity to work on a bundle with BitTorrent, following artists such as Madonna, Skrillex and David Cross. You can check out some of the images and video from Live at the Roxy for free by clicking here. It costs $15.99 to unlock Slash’s full bundle of 13 HD videos on the peer-to-peer network.