Japanese mobile messaging app Line has turned to keyboard apps as it looks to grow its presence in the U.S. and other parts of the world outside of Asia.

The company, which counts 205 million monthly active users, today introduced Emoji Keyboard, an iOS app that brings more than 3,000 different stickers and emoji right into your keyboard. There’s no word at this point on when it will come to Android. Interestingly — and this is telling of Line’s strategy — the app is available worldwide with the exception of three countries: Japan, Taiwan and Thailand — three markets that account for over half of Line’s active user base.

So the aim is pretty clear, provide a service that can bring new users into Line’s messaging and app ecosystem — which includes photo apps, utilities apps, games and more — independently of its chat service. 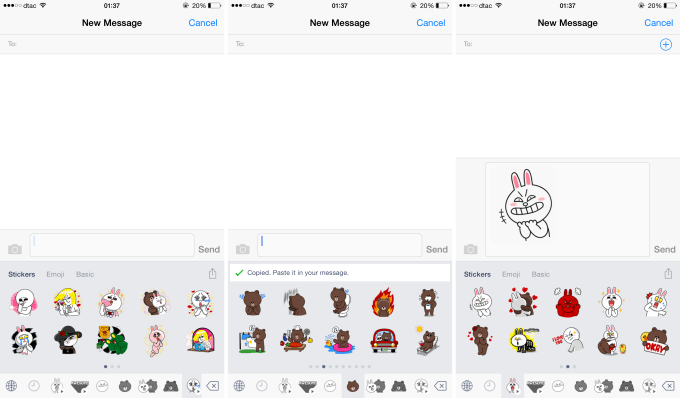 This isn’t a new strategy for the company — earlier this month it introduced a group calling app that lets up to 200 users chat at once — but a sticker and emoji keyboard has a decent change of drawing an audience in markets like the U.S. and Europe, where Line’s messaging service has failed to make a dent.

We’ve already seen a number of sticker-based apps and services rises up — just last month Fleksy integrated Imoji’s sticker sets into its popular iOS and Android keyboard apps — and it’s becoming an interesting space, particularly in the U.S.. That’s because a number of different messaging apps have won out Stateside — Snapchat, Facebook Messenger and Kik, for example — while Apple’s large marketshare (around 50 percent, compared to minority shares in Asia) has meant iMessage remains a popular way to communicate.

That fragmented U.S. messaging market makes it tough for an outsider to develop a sizable audience for a new app, particularly given that most U.S. residents still use SMS. A keyboard app, on the other hand, is present across all messaging apps and services. That makes it an interesting medium to gain prominence (and take up precious real estate) inside a user’s device and their daily activity.

Line’s keyboard app initially includes free stickers only, but users can add paid ones if they download the main Line app and buy them from the store. (Line was making $10 million per month from stickers back in 2013, so you can bet that figure has increased, but it is still only a fraction of the revenue it draws from games and other items.)

As for the app itself. It works just like Imoji and other sticker rivals. Most services in your phone, such as iMessage, will require you to copy and paste each sticker into a message bubble. So it’s less convenient than Line’s own app — which include an amazing feature that selects stickers as you type — but, if you’re not in a Line country, then you’re more likely to download a cute keyboard app than a chat app that none of your friends use.

If there’s one catch to this app, and other third-party keyboards, it’s the rather worrying message that pops up once you grant full access to the keyboard. That’s a necessary part of the process if you want a fancy keyboard, but in this day and age I wonder how wary people will trust third parties with their data in exchange for a few flashy, smiley faces? 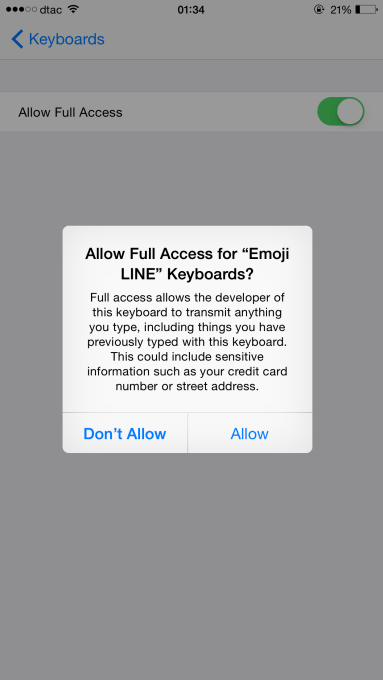