⚠️ Warning ⚠️ You may be about to see a lot of gigantic emoji surface across chat apps and other mobile apps. That’s because popular keyboard Fleksy just added stickers to its iOS and Android apps.

Fleksy is one of a number of keyboard apps that have long been available for Android devices, and made the leap to iPhones and iPads last year when Apple opened iOS 8 to third-party keyboards. With a multitude of customization options, quick word prediction and other time-saving features of typing, Fleksy has risen to become one of the most prominent keyboards, and now it is adding more multimedia to the mix.

Fleksy didn’t reveal how many users it has, but it said download numbers have doubled every month since February. With that in mind, it has made its apps free for a week to stoke interest — the iOS and Android versions usually cost $0.99.

This isn’t Fleksy’s first foray into images. It paired up with Riffsy to integrate its selection of Gifs into its keyboard, and this time around it has partnered with Imoji, the U.S. company that offers a platform to power stickers across multiple mobile apps. Fleksy is the first partner to make use of Imoji’s new SDK, which was released in beta in April and allows developers to access the three million-plus user-generated stickers on Imoji.

The Imoji integration is designed to help Fleksy users pull up stickers with ease, it supports sticker selection as you type. It isn’t quite as slick as that which Japanese chat app Line offers, but it works for multiple apps unlike Line. 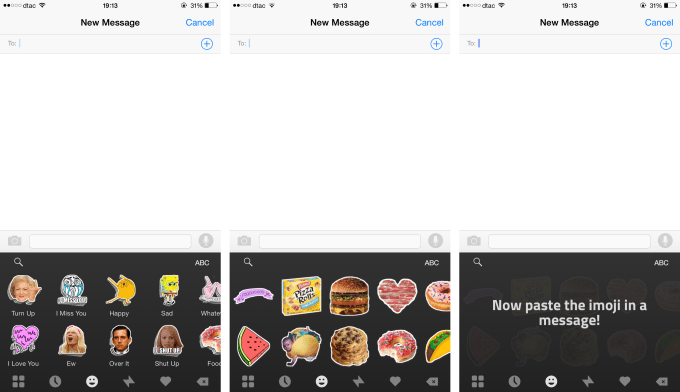 There are two main ways to add stickers. You click on the Imoji symbol in the top right, which will ask you what type you’d like, before serving up a selection. You can also find stickers that are trending on the service.

Alternatively, if you know what you want, you can use the on-keyboard search bar to look up specific Imoji; or Fleksy will suggest related stickers based on words you have typed.

Once you’ve found your image of choice, you tap it (which copies it to the clipboard) and then paste it into the chat window. Those who are big Imoji fans can sync their account right into Fleksy for access to their sticker collection.

I tested the integration across a range of apps, and it works on messaging apps best — to clarify, I wasn’t able to paste stickers into Twitter for iOS, Twitter client Tweetbot or Facebook for iOS. But, for one thing, it did bring stickers to iMessage without the inconvenience of an additional keyboard, and within Facebook Messenger I found it easier to use than rummaging through sticker packs, albeit that the content isn’t as polished as Facebook’s.

The integration sounds cutesy on the outside, but there’s business potential.

“We are creating a new interaction paradigm,” Kosta Eleftheriou, CEO and co-founder of Fleksy told TechCrunch in an interview. “Suddenly there is a whole “app” interface hiding behind the keyboard.”

That, Eleftheriou explained, could be used for a lot more than just stickers.

“The challenge is how do we provide all this content and functionality to users easily, but without cluttering the keyboard?” he added. “Our answer to that is as-you-type recommendations in the form of hashtags — visually subtle, tapping a hashtag takes you to the relevant content pane.”

Fleksy is using keyboard real estate to enable stickers, but it could do a lot more than that — for example content recommendations, deals, or more. Eleftheriou wasn’t specific about other users, but did caution that a feature “should only be there if it makes sense.” 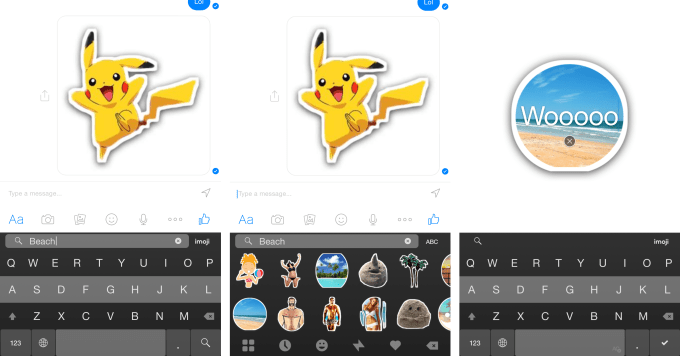 For Imoji, the deals marks the first partner of its aforementioned SDK, which Imoji’s founders said is designed to create a layer of visual communication across mobile apps.

“Emojis transcend beyond messaging,” COO Jason Stein said. “The power is being a big database of stickers, almost similar to Giphy for Gifs… we want to be the visual vocabulary to power other apps.”

Imoji is offering its SDK for free — CEO Tom Smith said it has seen interest from “hundreds” of developers — but the future vision for monetization is via a range of related services, not dissimilar to the model that Eleftheriou described.

In the future, for example, Smith and Stein said users exchanging pizza stickers could be served content — perhaps a special deal — at a nearby pizza restaurant. That’s the basic premise behind how Imoji could monetize, but the co-founders stressed that they’re focused on expanding the platform at this point.

Interestingly, they hinted also that there could be ways to pay Imoji power users who create large numbers of stickers.

Chat app Line, which is largely credited for pioneering sticker usage, last week revealed that its own user-generated sticker program generated $75 million in sales for the first year. The company highlighted its top sticker makers, but Imoji’s founders believe that they can find a better model for compensating their top users.

“There’s insane potential when it coms to figuring out a more effective content monetization model than sticker packs [model popularized by Asian chat apps],” Stein said, though he isn’t elaborating on ideas for now.