Hong Kong’s Spacious is one of the latest in a series of startups in Asia to raise funding to simplify the process behind finding property to buy or rent.

Spacious today announced that it has closed a $3 million round, following in the footsteps of 99.co (Singapore), Zipmatch (Philippines), Lamudi (emerging markets) and Housing.com (India) among others. The Hong Kong-based company was founded in August 2013 by former Goldman Sachs exec Asif Ghafoor and raised a $500,000 seed round last year.

The new capital is provided by a range of investors, including Nest VC partner Billal Naveed, and Ticketflap.com CEO Martin Haigh. Ghafoor told TechCrunch that he is unable to disclose the identity of other investors.

Ghafoor, who is originally from the UK and comes from a family in the real estate business, started the company when he ran into problems finding a flat in Hong Kong after being moved over by Goldman.

“It was just a terrible experience,” he said in an interview with TechCrunch.

“There was a lack of transparency around prices, income distribution in area, male/female ratio, ethnicity, languages, cafes, bars, etc. People feel like they have to rely on agent, who is paid based on commission, so there’s no independent mechanism to verify what’s happening in the market,” he added.

In response, Spacious uses a map-like interface which includes a range of data, from price estimates, local schools, neighborhood demographics, and even political stance and haunted houses (Asia ftw). Those details, Ghafoor said, can help house hunters make informed decisions without placing their entire trust in an agent. 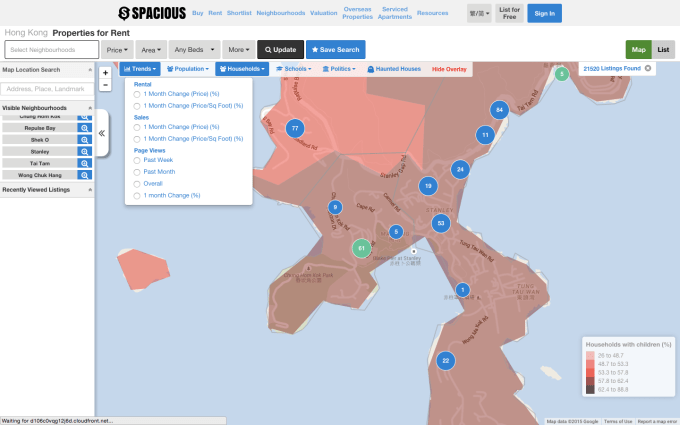 Spacious isn’t against agents per se, however. The startup works closely with them to provide listings, but it tries to promote good practices with an algorithm that rates each listing based on the behaviors of the agent who posted it.

“We monitor the listings they post and how they interact with people sending enquiries,” Ghafoor explained. “Using this information, we differentiate and reward the agents who are providing a positive experience with a higher search rank, through our verified agent program.”

Beyond making money from agents, who pay a monthly fee to use the service, Spacious brings in revenue from referrals to serviced apartments, and a range of partners which include Uber, venture-backed van on-demand service GoGoVan, and Boxful, the storage firm that just raised $6.6 million, which are listed on its website.

In addition, it also has an international property feature that allows users to browse new developments across the world, including London, Miami, New York, California, and Melbourne. Developer partners pay Spacious commission on deals it helps generate. 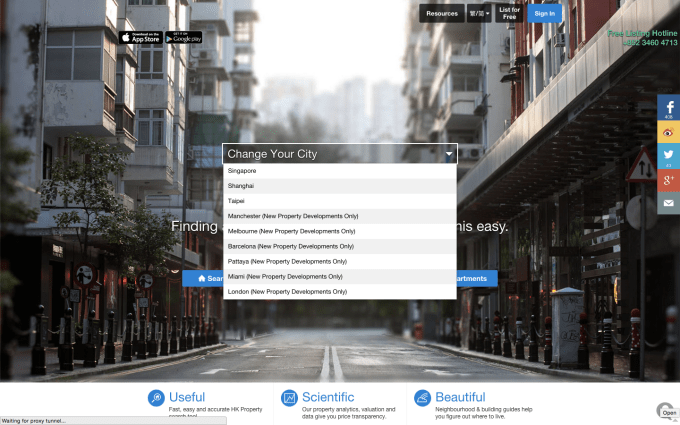 For now there are no ads, but there are plans to introduce some form of promoted listings in “the right kind of way,” Ghafoor revealed.

While he didn’t provide a total number of listings or details of the company’s userbase, he did say revenue is increasing 20-30 percent each month, while total traffic is rising 40 percent. Interestingly, Spacious now sees more traffic to the Chinese version of its site than the English one, and mobile devices — mobile browsers and its apps — represent over half of all traffic.

As for future plans, Ghafoor is looking to push the business on in Hong Kong and also expand into other cities in Asia. The Spacious founder claimed that the service is set up to add new cities in less than a week, and it has already launched pilot sites in Singapore, Shanghai and Taipei to test the waters.

“Given where we are physically, and size of the opportunity, we’re looking at Greater China, including Shenzhen and Beijing,” he said. “We’re trying to present a slightly different proposition, and appeal to a more sophisticated, international demographic that’s focused on quality of listings.”