Lamudi, the Rocket Internet-backed online property listings company for emerging markets, has closed a $18 million (€16 million) round of funding to develop its marketshare and revenues worldwide.

The service was launched in October 2013 and, though run out of Rocket Internet HQ in Berlin, it is present in 32 countries across Asia, Africa, the Middle East and Latin America. Lamudi said it has over 550,000 listings from its markets in Asia and Latin America, and more than 800,000 in total.

The company’s next phase — buoyed by this funding — is to tighten the screw and win competitive markets, monetize nascent ones, and add new services to its product, Lamudi co-founder Paul Philipp Hermann told TechCrunch.

“Our business is at different stages in each market. In more developed places, we have to show that we offer a better services than our competitors, while in markets where we are first movers — such as Myanmar or Bangladesh — we have to convince the industry of the opportunities of online advertising,” he said.

On that note, Hermann explained that — in some nascent markets — Lamudi is practically pitching the internet to property developers and real estate agents who still rely on offline channel for business. As a result, it offers months-long free trial periods to customers in certain countries, to let them taste the potential of the internet without financial commitment. Now it is working to transition those testing its service into paying subscriptions, via a monthly listing fees and/or banner advertising space.

Hermann wouldn’t reveal details of Lamudi’s current revenue levels. Since it is raising capital and focusing on monetization, it is fair to assume that Lamudi — like other Rocket Internet-backed companies in emerging markets — is some way from being profitable at this point.

Lamudi has a wide geographical spread and over 800 staff, but Hermann indicated that it has identified most of its core markets at this point.

“We constantly look at additional expansions. We won’t grow as fast as last year but… we could move into two or three new countries in the next few months where we see good opportunity and a chance to win the market quickly,” he added. 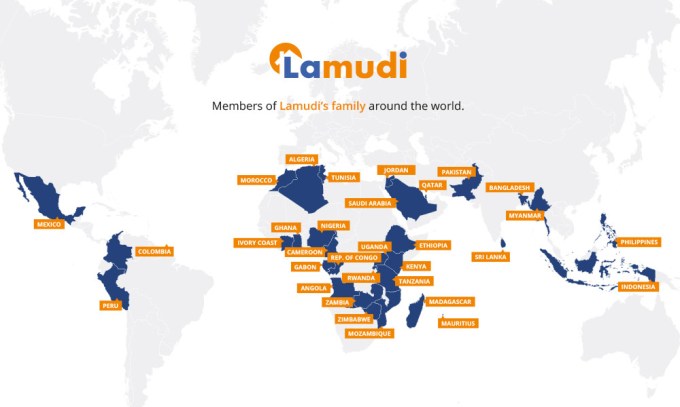 On the product side of things, Lamudi is working to introduce a new option that allows developers to showcase and sell new and under-development properties. SoftBank-backed Housing.com in India saw success selling new developments online — albeit exclusively — and Lamudi will introduce the service in its more advanced markets over the coming months.

Hermann said that Lamudi won’t demand exclusivity, though, since he’s confident that prospective customers “will see that our approach is better and more cost efficient” than alternative sales channels.

A footnote to the funding news, Lamudi also revealed that it has merged its businesses in Asia and Latin America to create ‘Lamudi Global’. Hermann said these changes are merely organizational. Lamudi’s Middle East and African businesses remain affiliated but separate since they are part of Rocket Internet’s Middle East Internet Holding and Africa Internet Group units, he explained.