Remember Ello? The social network that promises to be ad-free will drop an iPhone app starting tomorrow, June 18. The announcement about the app is already on the homepage of the Ello website in big flashing words that read “Coming June 18th.”

The company also sent me a very cryptic box of thingamajigs today. Something that looks like a piece of bread made out of wood, some t-shirts and a USB card with a press kit announcing the iOS app. 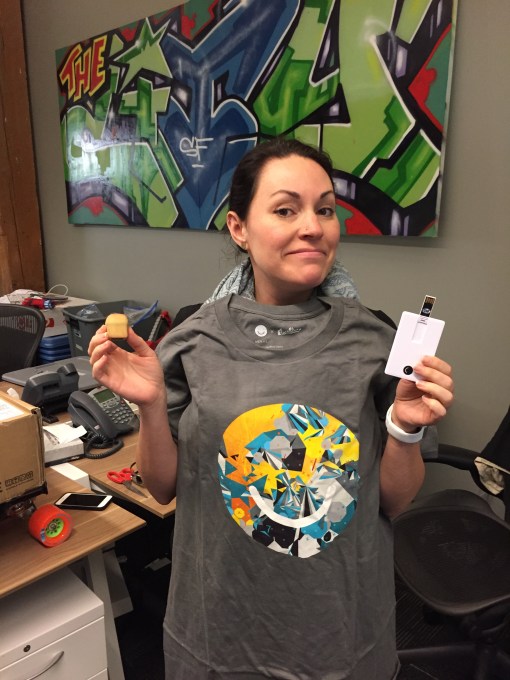 Ello quickly became a favorite site to check out as an alternative to Facebook in the fall of 2014. Everyone wanted an invite. The site received 31,000 invite requests per hour at one point, according to the startup.

We came, we saw and we kinda forgot about it.

Though co-founder Paul Budnitz said there were “millions of people using Ello on the web” in a company statement, Ello has so far remained secretive about its growth numbers. But the frenzy lasted long enough for the team behind the social networking site to nab $5.5 million in funding.

Ello has so far used that money to redesign the site and create the aforementioned iOS app and a planned app for Android.

But will any of this get users to want to go to there? Ello pitched itself as a Facebook alternative for those who don’t like being bombarded with ads. Yet people didn’t leave Facebook for Ello. In fact, many of those talking about Ello were posting about it on Facebook.

TechCrunch’s own Josh Constine compared going up against Facebook to “punching a wall 1.35 billion bricks thick.”

There have been a number of other social networks that have attempted and failed to unseat Facebook before (ahem, Google+). And Ello, for all its ideals, didn’t offer much incentive for folks to switch. You can block Facebook ads with ad-blocking software.

Even with the funding and redesign, Ello still offers pretty much the same thing as most other social networks – an easier way to find your friends (something seriously buggy in its first iteration of the site), search, real-time alerts, private messaging, private groups and something called “Loves,” which allow users to show support for a post. Those posts are then put together in a stream of posts for users.

Ello’s mobile app promises to remain ad-free and includes an address import feature. But the redesign and app are quite close to what most other social networks already offer. It’s not enough to exist with one extra feature considering the larger, more successful social networks Ello is up against.