Dropbox today rolled out a new feature that will allow those without an account to share files with Dropbox users. Called “File Requests,” the option gives anyone you ask the ability to upload files into your Dropbox account, into a folder of your choosing. Through a simple interface on Dropbox.com/requests, you can specify what file or files you’re looking for, and you’re then provided a link you can distribute or you can select the option to have Dropbox send a request email on your behalf.

The company says the feature was implemented to address a common pain point among users. Today, most people continue to share files with one another as email attachments, which can be cumbersome to sort through. This continues to be the case because not everyone uses the same cloud service for file sharing, too.

Dropbox’s File Requests feature is meant to offer an alternative to email-based file sharing, as it puts those in need of the files in more control. The company suggests the feature can be used for a range of sharing scenarios, whether it’s collecting bids from contractors, asking for files from clients, or even asking family members to share vacation photos.

“We’ve had it internally built and in testing for quite a while,” Dropbox product head ChenLi Wang said. “One of the most interesting examples internally was when we were working on document previews. The previews team used file requests, asked people around the company for documents that are hard to render in order to challenge their rendering pipeline. They were asking for really complex PowerPoint decks.”

The feature has another advantage, as well – it works with larger files, like video. Dropbox says that, unlike with email attachments, people can send files as large as 2 GB in size using File Requests.

When asking for files, users can also indicate which folder should host the files as part of the request process. Then they can either copy the link Dropbox provides (which points to a file uploader interface), or they can enter in the email addresses and message they want to send. 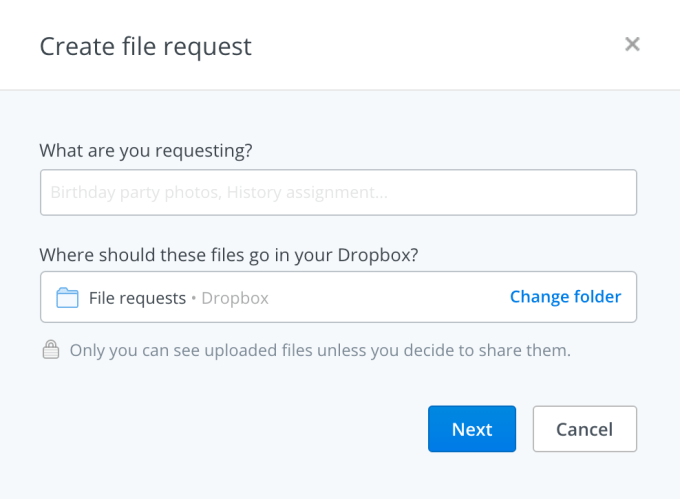 In addition to making it easier for current Dropbox users to ask for files from others, the new option may also serve to introduce Dropbox to others who had yet to try the service.

Of course, the feature also lets you ask for files from those who are already on Dropbox – in that case, it just simplifies the collection process by centralizing all the uploads into a single folder available across your devices.

The company says File Requests is currently available for Dropbox Basic and Pro users, and will arrive for Business customers in the next few weeks.